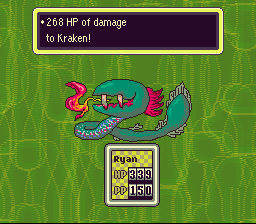 Mario returns in this incredible new role-playing adventure! His latest rival is Smithy, a menacing creature who causes fear and treachery in the Mushroom Kingdom. Mario must recover seven stars and repair the Star Road before he can make his way to Bowser's castle for a final confrontation with Smithy. Powerful weapons, sinister spells and other useful items help Mario to complete his harrowing journey. New friends and old allies support him along the way. Even Bowser lends a hand!

Super Mario RPG - Legend of the Seven Stars Review by: rcarter2 - 9/10
Very Unique Mario Game
When you think Super Mario, you probably think platforming, goomba bouncing, turtle shell throwing, Yoshi riding, and block breaking. There is an almost endless list of things you associate with Mario, but if you haven't played this game, turn based RPG is not likely on that list. Super Mario RPG: Legend of the Seven Stars was the first time we saw Nintendos most popular character in the RPG world. Upon introducing this game, there was a lot of skepticism about whether or not it would work. It didn't take long for this game to become an instant smash hit and in many people's lists of the top Mario games of all time. For good reason too, as this game, in my opinion, is near perfection.

Graphics: 10
Even though the SNES has graphics that the NES could never surpass, it still followed the same trend of side-scrollers or top views in most of the games. But Super Mario RPG pushed the capacity of the SNES graphics to the max, as it was one of the first games for the SNES to be played completely in a 3D environment using polygons that N64 used. The characters, animations, and environmental elements are crisp and clean, as well as eye popping. Having Mario have access to 8 direction ranges of movement made it possible to make this game huge and more interactive than any SNES game I have ever played. The graphics are colorful, non repetitive, and downright beautiful. When it comes to the SNES, you can't get better graphics than this.

Sound: 10
The developers of this game certainly put a lot of work into this game. A lot of times, you see good graphics at the sacrifice of music and sound. This is not the case here. Starting with the music, this game is a masterpiece. Almost every location has it's own unique music, none of which are irritating. As a matter of fact, most of it is delightfully upbeat and fun. It does such a good job at setting the mood of the location you are in, as well as the situation. Best of all, this game does not overpower the sound effects with the music. Usually, with a game that has awesome music, you can literally count how many different sound effects there are. In Mario RPG, the sounds are just as well done as the music. You get your classical sounds of the *BOING* in Mario's jumping and the jingle of collecting coins, which reminds you that this is still a Mario game. But there are hundreds of different sound effects ranging from the various attacks and environmental sounds. The developers showed great dedication to making the sounds and music perfect in this game.

Addictiveness: 10
This tends to be common with a lot of RPG games, and this one is no different. Because this is a turn based RPG game, the battles themselves can get repetitive, but that doesn't even hinder the score. The story is so fascinating, you find yourself playing just to see what the heck is going to happen next. It is like a book you can't put down or a movie you can't pause. Along with the story, there are so many extra things you can do such as mini games or side-quests that there is not a dull moment in the game. What is best is that even after you beat the game, it is pretty much just as fun doing it all over again when you decide to.

Story: 10
You would think the things I have said about this game shows the best aspects of this game, but that isn't remotely so. This game can have the things I have discussed up till now and still fail. It could lack in graphics, sound, and addictiveness and still be great because the story is amazing. At first, it starts as your typical Mario game where Bowser has kidnapped the princess, and it is your job to rescue her. But in the middle of the rescue, everyone gets separated, and your journey really begins. This moves from a mission to rescue the princess to a quest to restore the wishes of everyone and save the world from an enemy so great, he is the first person to kick Bowser out of his own castle, forcing him to team up with you. Through the game, you will gain four other characters in your team, each with their own goals, but their paths become bound together. The story is more unique that any previous Mario game as well as extremely well developed. You have no weird gaps or loopholes in the story, and manages to make you care about what happens.

Depth: 10
This game has a super massive world that has things to interact with everywhere you go. Though the game has a fairly linear path, you are always welcome to go back to any point you wish to do something else. The games main quest itself also deviates from the main quest to obtain all the stars, which are points where you find a completely new short story line to complete. Unlike many RPG games where you mostly just get to buy stuff, level up, and strengthen yourself with better equipment, Super Mario RPG gives you so many mini games to keep it fresh all the way through. For example, you can participate in Yoshi races, collect beetles on Booster Hill, gamble in the Great Guy Casino, ride a cart in the minds, or compose music in the Tadpole Pond. You will also see that you will not do everything you are able to the first time playing through it. To truly do everything you can, you will have to backtrack to check it all out again. There is not a lack of things to do.

Difficulty: 4
No game thus far has been absolutely perfect in every game, and difficulty is this games weakness. At first, this game can seem difficult if you aren't used to turn based RPG games. Those who are or those who play this game to a certain point know that this game is only as hard as you make it. Any time you have trouble with a particular enemy, it is a matter of time rather than skill that will get you through it. All you ever have to do is fight weaker enemies until you level up enough to whip whatever enemy is giving you trouble. If you manage to max out the level, even the final enemy is a cakewalk as long as you choose your items well.

Overall: 9
This is one of my all time favorite games because it is perfection in almost all the things I find important in a game, story always being at the top of the list. If you like Mario AND Final Fantasy games, you will love this as well. It may be different from other Mario games, but keeps enough elements to stay true to the franchise. It has an amazing story, countless things you can do, and the best graphics, music, and sound effects you can get out of the SNES. The only downfall is that it is easy if you remotely know what you are doing, but for those who don't like really difficult games, that is a plus. The game will take you hours and hours to completely get through, but it is worth every second.

Super Mario RPG is a console RPG starring none other than Nintendo's popular character Mario. This game starts off like almost every other Mario game, with Bowser kidnapping Princess Toadstool. However, when Mario goes to Bowser's Keep to save her, a giant sword made by the evil Smithy crashes into the castle and sends Mario, the Princess, and Bowser flying to separate parts of the world.The game plays much like a traditional RPG: Mario and the members of his party gain experience points by defeating enemies. These experience points can increase the team's maximum number of hit points and flower points (magic points). The battles are also turn-based, but this time there are timed attacks and defenses. Timed attacks allow you to inflict more harm than normal to an enemy. Timed defenses, on the other hand, allow an enemy to inflict less harm than normal. You are only allowed to have three out of five team members on your party at a time. Mario is always in your party, regardless. Your team members can also purchase more weapons and abilities, along with better armor.

Infinite Money:
• When you are on the path going towards Rosa town, get to the section where all of the ShyGuys are standing on top of the treasure boxes. Go to the bottom right side of the screen to the exit. Hit the box next to the door and get a few coins (but do not empty it, leave some in) then go through the exit. As soon as you go through the exit, go back through and hit the box more times (still don't empty it). Then just repeat this until you have a many coins as you want, it won't go empty!

Improving the Jump:
• The Jump special's power improves the more it is used. This improvement is not based on leveling up or equipping items. So trample them monsters and smash them all!

Users who own Super Mario RPG - Legend of the Seven Stars

Comments for Super Mario RPG - Legend of the Seven Stars