As a way to bring recognition to the New Layout Creator, and to also get some templates made for others to use, I'm giving away cash prizes to those who make the best layout with it!

Whoever makes the best layout wins. It can be of any theme as long as the theme is appropriate for all ages. You'll have 2 weeks to make the layouts and then they'll go into voting for 1 week. You can find the new layout creator here:
https://www.vizzed.com/u/layout.php

Rules:
-Privacy of layout must be set to "Copyable"
-All images should be hosted on Vizzed
(need somewhere to upload them? go here)
-The height should be no more than 500 px
-Total size of all images should not exceed 250 KB

So my log system started acting up 2 days ago which caused a lot of features on the site to stop working. This includes:
-Retro Game Room
-Video Game Room
-New Threads
-Vizzed GO
-Many Others

May VCS is Now Live!

Hello everyone! Here's your gentle reminder that the May VCS has begun! There are prizes in store for you, as well as a Near Guaranteed good time while you participate! Now is the best time to rack up that Viz, you'll need it for playing so many RGR games while you're home...

You can find more information here:

Additionally, just want to take some time to remind you all that we have a Discord server. The link in the thread had expired unexpectedly, but I've created a new one recently. You can join by clicking this link:

Shout Out to My Patrons + New Rewards

I added a few new rewards to my Patreon Tiers

Digitized Patron
Extra Vizzed GO Trap: You can deploy a 2nd trap as many times as you want in the Vizzed GO game.

Colorized Patron
Your Own Minecraft World: Your very own world on the Vizzed.co Minecraft Server. Choose the settings and do just about whatever you want with it. World gets removed once you downgrade pledge but a copy of world will be sent to you.


Be sure to check out my Patreon page for a full list of all the perks of pledging to the site. You can pledge as little as $2 a month and the things you can get include:
-All Ads Removed
-Access to More Site Features
-Download Songs from the Video Game Music Room
-Promoted to Vizzed Elite
-Massive Viz Multipliers
-Ability to change username, color and style
-You get 1 - 8 hours of my time
-And a lot more

If you're interested in pledging, go to my Patreon Page here:
https://www.patreon.com/DavidAuchampach/

I wanted to give a shout out and thanks to my supporters on Patreon. Their financial support has really helped out a lot. I'm hoping these shout outs give them more recognition among the Vizzed community. If anyone else is interested in supporting this site (there are tons of benefits for doing so), you can help out for as little as US $2 a month here:
https://www.patreon.com/DavidAuchampach

Here are all of my current supporters:

I've been spending the past few weeks making the site more adaptive so that everyone has the same site experience and features no matter what device they're on. Instead of spending a bunch of time trying to explain how responsive the new layout is, I've made a video to demonstrate it

Things added or pdated in the past 3 weeks:
-Site adapts to almost every screen size
-Users on mobile devices now have access to far more content now
-The size of the generated HTML of the pages is a little smaller, allowing for quicker page loads
-Site users less Javascript, which helps reduce the amount of strain the site can put on your browser
-Site can be shrunk down to a width of 250 pixels
-Messages Center takes up less space
-Site reserves more space for showing who is on a page and the users with less posts take up less space
-Vizzed GO box takes up a lot less space now
-Rearranged some ads
-Enhanced the appearances of various elements on the site and with the way some things are displayed

Things fixed:
-Some old post layouts have been fixed
-Added a ? icon to the header links which allows you to access links that would sometimes get cut off due to lack of space
-Information and Navigation Columns no longer exceed the vertical height of browsers that aren't very tall (they receive scroll bars instead of being cut off)
-Navigation Column also received scroll bar if there are too many links and the links exceed the height of the Navigation Column (especially good for staff, who have access to a lot of links)
-Fixed an issue with the HTML5 RetroArch emulator where the game fails to load on the first attempt
-Some posts couldn't be editted, this issue is fixed
-For posts that have been edited, the previous post box didn't display what the previous post's contents looked like, this is fixed


What sparked this series of pdates was when I realized my ad revenue wasn't as high as it could be. Ad Manager told me that the ads for mobile devices were low because of the way the site displayed its content to mobile devices. Basically mobile devices were viewing a different site layout, but now that's not the case. I also noticed that Google was in some situations indexing the mobile pages instead of the desktop pages.

To sum things up, this series of pdates should help increase site's revenue, traffic, and everyone's overall user experience.

I realize that the previous announcement had a bad link, and was also ill-timed. I'm making another announcement to remind everyone that the April 2020 VCS is still ongoing! There are a TON of prizes to win just for posting around the boards! You can find more information here, if I don't mess up the link again:

Be sure to check it out! It's far from too late to even take first place. The prizes will surely enhance your Vizzed experience.
Posted by: Minuano on 04-05-20 - 17:49 pm

The April VCS is Almost Underway!

As you all know, there was supposed to be a VCS in March. Unfortunately, due to the database issues, it had to be postponed. But now we're all raring and ready to go for April!

The prizes for this month are INCREDIBLY generous, with almost 600,000 Viz going around, as well as extra goodies! This opportunity is PERFECT for the newbies looking for more Viz and have something to say! I hope you'll all consider giving it a shot!

You can find more details here:

For the first time ever, I'm offer a custom username style to the winner of this Tournament. And for those who don't know, Foxyman1113 dethroned me last year so I can be beat. I'm also offering up cash prizes again like last year.

This could potentially be the last Bomberman Tournament that I host due to the potential discontinuation of the RGR Plugin at the end of the year so I'm hoping we can get as many users involved in this. Maybe not for the purpose of winning but for the purpose of having a reason to hang out and chat. 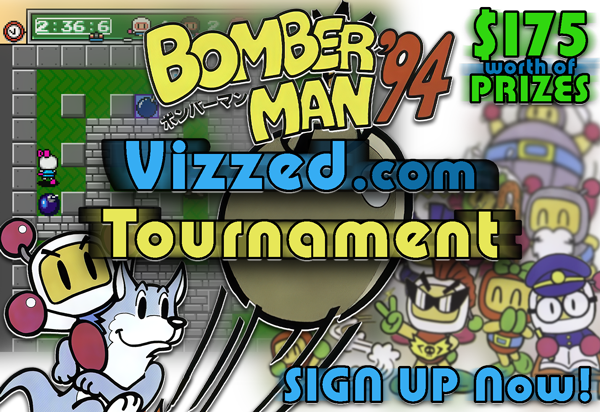 In this tournament we'll be playing Bomberman '94 for the Turbo Grafx. Each user will play 2 matchups a week. You get to choose which day and time you want to play each week from a list of available times and days. Each matchup could be any of the following:
-1-5 Player Free for All
-2 Players vs 2 Players
-1 Player vs 1 Player
-Other possible combinations


This tournament is incredibly flexible to everyone's schedule. Each week you can choose between the electable times and days that you're available to play. As long as you're available 2 nights a week between 4 PM - 9 PM central time Tuesday-Friday nights then you'll be able to participate. You can even miss a few matchups and still have a shot at making it to the final matchup (but just don't miss too many otherwise you'll be added to the netplay ban list).