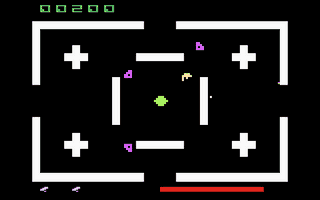 The Grand Theft Auto series finally makes its way to the Game Boy Advance. You play as a member of the Mob looking for a way out of your vicious lifestyle. The murder of your mentor, however, sets you off on a search for those responsible. To track down the killers, you must complete all-new missions while avoiding every cop in the city. As in previous installments in the Grand Theft Auto series, you can jack cars, explore the city, and wield a variety of weapons.

Grand Theft Auto Advance Review by: Mister X - 3/10
An Unsatisfying Crime Adventure on GBA!
Ask anyone what they think of when they hear “Grand Theft Auto”. Most will associate it with brutality and violence, more conservative folk may interpret it as a weapon in and of itself. The general view, however, is that this series is vicious and folks not familiar with such acts need not observe. So why is it that Rockstar Games decided to put a title of their most infamous franchise on the Game Boy Advance? Was it intentional- to “taint” a system made by the devotedly family friendly Nintendo? The world may never figure it out. What is known for sure is that Grand Theft Auto Advance was originally intended to be a port of Grand Theft Auto III, but was eventually made into a prequel of the latter. Released in 2004, GTA:A came out the same day as San Andreas, arguably the greatest open world game of all time. Can this almost-was-a-port hold up to its big brother?


A Not So Fresh Story of Ascendance in The Big Apple.

2000, Liberty City. Small-time crook Mike and his mentor Vinnie are “saving” up money to move away from Liberty and on to more lucrative opportunities. Almost ready to leave, Mike witnesses Vinnie's death via car bomb. Swearing vengeance, Mike travels around the city doing work for various criminal figures in order to elevate his own status and deduce who Vinnie's killer is while also working towards his original goal of leaving the so-called “worst place in America” for good. New characters here are the rotund bartender Jonnie, Colombian mob lord Cisco, and the physical appearance of treacherous Jamaican Yardie boss King Courtney. There are also some returning members: bomb expert 8-Ball, Yakuza leader Asuka Kasen, and the prostitute Misty.

No matter the limitations of the system, any game can have a good story. Given that GTA is widely lauded for including such a feature with each title, it's strange seeing it absent here. I counted, and there are only about 8 or 9 characters with any importance. Now, that's not a big deal, GTA III had only about 12 characters but the chemistry between them and their individual characteristics were rich enough for that to not be a problem. However, the only interaction between any characters are with Mike and everyone else. Not only that, any twists or developments are bland and heavily telegraphed. But most prominently, the characters are flat and boring. Though this is a big problem throughout the series it's especially noticeable here. Mike is always the same naive, thick-skulled brute who lets his bosses use him without limit.

Whatever. It's GTA, right? You probably skip all that anyways. Moving on...


Liberty is Bigger......But There's Nothing To Do!

The first game to be set in Liberty City since GTA III, and a year earlier (chronologically), you'd expect to see some new stuff around. Maybe more districts, more side-missions, collectibles, stuff like that. Well, the city is larger this time around, sure. But there's actually less to do now. They even removed the paramedic and vigilante side missions! Besides the 41 bland, boring, simple, easy story missions there are 18 races split up around the 3 districts, none of which took me more than one try to beat, as well as a “demolition football” challenge which is kind of like the stunt jumps in other games mixed with a time challenge. Nifty, sure, but once you beat (again, very easy) it you can't do it anymore!

Now, Grand Theft Auto wouldn't be Grand Theft Auto without some autos! The election is identical to that of GTA III although there is a new secret Formula 1 car....that handles the same as all the other fast cars. You have the Infernus and the Banshee and some gang cars for variety but like the rest of the game, they're nothing special. To the game's credit, though, they handle very fluidly and the controls are mapped to all the right places, d-pad to steer, A for the gas, and B for the brakes. Being the GBA that's not that big an accomplishment however.

Then there's the weapons. Probably because there aren't any buttons available to slide through a roster (the shoulder buttons are used for drive-bys and getting into a vehicle) there are no restrictions on having one type of weapon per class at a time. For example, Mike can carry both the baseball bat AND the katana at the same time. As well as the car bomb. And the flamethrower. You can buy all these from the Ammunation for a reduced price like in GTA III so there's no real reason to not be carrying thousands of rounds of ammo. Guns work simply enough, just face the guy you want to kill and fire!.....

Running out of stuff to talk about guys

Finally there's the difficulty. If you aren't acquainted with GBA controls this will be a bit like jumping into cold water right after waking up. You don't have the precise directional control of other consoles and that will be the cause of most of your deaths early on. Once you get it down though, which should only take about an hour, You'll be gunning down baddies (or civvies, depending on how you like to play) with ease. Cops are a pushover and with a fast car you should have no trouble losing them.

Hey Rockstar, if you were able to blow up the size of the city on a console inferior to the PS2 in terms of performance, why couldn't you put in more....things? Seriously, I'm not making this review short because I don't like the game but because there's so little to talk about. I pushed myself to come up with stuff to discuss but to no avail. The game works, I suppose, like that's supposed to be a plus. You know they actually cut a barrel from this game? You were supposed to roll it towards enemies and it would crush them. If that was kept I would have given the game an extra 5 points at least, but alas.


See The Sights in Glorious 2D And Hear Nothing Good!

To be fair, the graphics are the game's strong point. Perhaps they aren't as crisp as Pokémon FireRed or other first-party GBA titles but they're still quite impressive for the system. Cutscenes consist of stylized head shots of the characters currently talking with the occasional fitting background. The head shots strongly resemble the artwork you see loading up any Grand Theft Auto title and it's quite fascinating to see them used in the actual game. The backgrounds are thematic, for example a cutscene in Chinatown will feature signs with Han characters and a street thick with vendors. These cutscenes almost make up for the comparatively poor graphics during normal gameplay. The textures and sprites, while typically (see below) smooth and consistent throughout,  are overall underwhelming and resembling GTA I. One. The one released in 1997. From this top-down perspective Mike and all the pedestrians look like little cartoon stick figures. It looks even more like a cartoon when you see the punches- the punching hand appears to increase in size by about 500 percent. Overall, however, the graphics in their entirety are good. That's just it, good. Not too attractive but they work.

From the best part of the game, however, we get into the worst. And this is a shocker. GTA games always attract criticism but it's hard to argue that their soundtracks are spectacular. So what do we have here? A couple of pre-set songs that are in fact remixes of tracks featured in GTA III....I think- on the GBA they sound nothing like their original versions but rather indescribable messes. It's heartbreaking, really. Some of video gaming's best soundtracks belong to the same console. There are few real sound effects, just the monotonous sound of gunfire and the occasional pedestrian interjection, which would have been cool yet, of course, there's only a couple of bland ones in this game.

Now THAT'S what I call pathetic!

Remember when I said this game came out on the same day as San Andreas? To say Grand Theft Auto Advance lives in that games shadow would be the understatement of the century. A competent open-world game, Advance would be far better off on a non-portable console. With better characters. And better music. And more stuff. The ellipses I used so incessantly throughout this review was not because of my laziness, but rather indicative of how you keep wanting more to come from this game but never getting it. Stick with GTA III.
Graphics 6   Sound 1   Addictive 2   Depth 2   Story 1   Difficulty 3

Today is your last job, your last day working for the mob. After this, you could escape the seedy undergrowth of Liberty City and have a good life, with all the money you could ever want. But something went wrong on this last day. Now, with your best friend Vinney murdered in a car explosion and you pinned for the crime, you must return to the underground and find the truth. To save your skin and find Vinney's killer, you'll have to work a few more days.

Liberty City makes an appearance in Grand Theft Auto Advance, the handheld exclusive based on the award winning console franchise. A combination of the gameplay and challenges that made that 3D rendition so successful, and the 2D style of the original GTA series comes together here, where you must drive to survive and use all the weapons available to you to complete each of the missions, in order to find Vinney's true murderer and save yourself in the process.

To Enter Cheat Mode:
Press A+B+Start in game (Not on the menu). This also shows your coordinates on the map.

Increase wanted level from 0 to 6:
LEFT,RIGHT,UP,DOWN,R,R

Decrease wanted level from 6 to 0:
LEFT,RIGHT,UP,DOWN,R,R