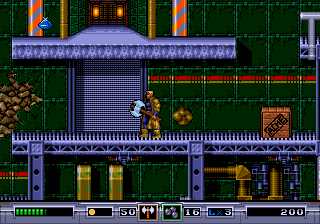 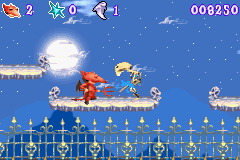 Videos of Sonic the Hedgehog Gameplay

In 1991, Sega created Sonic the Hedgehog... As a response to the Nintendo's famous pet: Mario. The Hedgehog's game was the thing that the Genesis/Mega drive needed to become famous. His original game play, which involved speed. Make many people buy the Sega's console. But, What about the Master System's users? Of course, they got their own version of the game... Which was pretty different from his 16-bits counterpart... Today, the lucky game that will get his very own review will be... Sonic the Hedgehog for the Sega master system! Let's take a look at it.

History: Somewhere in the world there's a place that doesn't appear in any map... This place is know as "South Island" a beautiful island in where different species of Animals give life to the place, and in where some of the most exotic plant species can be found. This island is some of the few places in the world that isn't covered with the pollution of the big cities... But, one day. An evil man known as "Dr. Robotnik" gets to this place, and his intentions weren't take some good vacations. He came for something more bigger: The Chaos Emeralds... Six powerful gems that contains a big power. Robotnik builds a big factory in the island. Also, he captures all the animals of the place and uses them as the main power source of his Badniks... Soon, the Island feels the consequences of the Evil scientist's base... And it starts getting contaminated... When everything seemed to be lost, Sonic the Hedgehog appears... He's the only that can save the place from the Robonik's tyranny... The only way to succeed is find the Emeralds before the Evil fat man, That's the only way to clean all the pollution of the Island, Here's where the adventure starts...

An evil man that uses animals as power source.. Well, Back in the 90's this kind of history wasn't very common... Pretty different from the habitual Kidnapping history. (8/10)

Graphics: Okay, the 1st.thing you may notice is that the sprites are a bit more smaller than in Genesis version... Also, the backgrounds has less details (Green Hill Zone is the most notorious example) However, Keep in mind that this game is for a 8-bits console... So, They are okay... Animations are good, also. Just look at the Jungle zone's waterfalls of Sonic when spinning fast. (7/10)

Sound: Music is Okay... The GHZ's music is the only one that is based on the Genesis version of the game... The rest of the music is new and exclusive for this port... Composers did a great work at it, Scrap brain and Sky high zone themes are my favorite. FX is a bit different from the 16-Bits version (Of course, this is due to the console's limitations) However, these don't get annoying. (7/10)

Addictiveness: This game isn't really addictive. Once finished you will not play it for a good time. It's something that depends of the player, Personally, I only finished this game once. (6/10)

Depth: Run as faster you can until finishing the Act while grabbing rings, that's the only thing you will do here... However, some zones can present different challenges. Such as the 3rd. Act of Scrap brain. In where you must find the exit in a big labyrinth full of doors and teleporters or the 2nd. Act of Jungle zone in where you must go up being careful of not falling. (7/10)

Difficulty: The game starts as something easier. But, As more closer you get to the Final Zone more challenging becomes... Sometimes, the thing becomes really harder and frustrating. (8/10)

This isn't one of the best Sonic games... If you want some challenge. This is your game... If you only want to run to end. Then this isn't for you. A pretty good game that you can play for pass the time, Just give it the chance.

Bust the video game speed barrier wide open with Sonic The Hedgehog. Blaze by in a blur using the Super Sonic Spin Attack. Plummet down tunnels and spin through space. Bounce around till you're dizzy in a pinball machine. You've never seen anything like it!

In the second act of the Green Hill zone, after the pit of water, there is a spring. Hit the spring and jump so you hit the corner of the wall. if done corect, sonic will get stuck on the wall and if you jump to the right, sonic can go to the nearest place above him (the waterfall leading to the chaos emerald)

Sonic the Hedgehog Guides and Walkthroughs

Users who own Sonic the Hedgehog

Game Characters in Sonic the Hedgehog

Comments for Sonic the Hedgehog