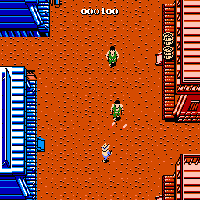 It's robot rebellion, and nobody's safe! Least of all, Mega Man! This time the superpowerful cyborg takes on a horde of metal maniacs who've had it with being obedient! And they use every android-annihilator ever invented to make you believe it! Mega Man goes berserk, blasting through a galaxy of mining stations in search of energy crystals. But it takes more than guts to battle the phenomenal robot masters who control these worlds. It's a wrenching job, the worst - and the best - that Mega Man's faced so far!

Mega Man 3 Review by: Zircron Swift - 8.4/10
Mega Man 3 review - the blue and cyan man is back
There have been many debates on weather which game is considered the best Mega Man game for the NES. In the end, the choice is either the second one, or the third one. Some say the third one, with it's sliding and nostalgic parts, is superior to the second one. Others say the second one is better with it's classic game play and epic Wily stages. People have also debated weather which sound track is better. I won't be discussing witch one is better, but I will review this game to find out for myself which is better. So, lets jump right in and have a look at this game.

The first thing that strikes you is the opening music. It is just amazing. It's worth having a listen to all the way through, and is diffidently one of the finest songs in the Mega Man NES games. This game doesn't have a difficult mode like the second game, just "Start" and "Password". What if I want a challenge? Maybe this will be a challenge enough, as I have heard that thing game is harder than the others. So Dr Wily has apparently turned over a new leaf, and is helping Dr. Light create a peace-keeping robot Gamma. However, eight robots have gone hay-wire and have taken eight power-crystals to power Gamma. There isn't a cut-scene, so it must be in the instruction booklet.  So, same as the first two, you have a choice between what Robot Masters you get to fight. There are eight, and seems to be a recurring in the NES games. The Robot Masters are each unique, but they might be pushing the creativity a bit with "Hard Man" and "Needle Man" (I'm glad he wasn't names "Spike Man" =P), but is still a nice selection. When you beat a Robot Master, you gain their weapon. Each Robot Master has a weakness from another Robot Master. Some are immune to some attacks, though.

Now in the first two games, the weaknesses made sense most of the time, but some just don't in the third game. For example, would you guess that Gemini Man is weak to Snake Search? HOW? Is he afraid of snakes or something? Is he allergic? The level design is pretty darn good. You have disco-balls that darken the room, weird balls that block your path that can be destroyed, then spawn enemies, and a mysterious red robot with a shield and scarf that battles you every now and then (gee, I wonder who that could be =P). A couple of the new features is that you now have a dog: Rush. You start off with Rush-Coil, but will later get Rush-Jet and Rush-Marine, which helps later on. Another one is you can now slide by pressing Down on the D-Pad and the Jump Button. This helps you get out of sticky situations and dodging stuff that bounces.

The password system is a little more complex than the second game. You need to place red and blue dots for the password. As if one colour wasn't enough. But a nice thing is you get the password after every level and at a game over, weather you like it or not. In fact, the game over music has to be the happiest tune for when you failed a game. Speaking of music, some songs are pretty awesome, such as Spark Mans stage. Although some stages, their music seems more relaxed than the second game, giving a different atmosphere in the game. It's not that big a difference, but I prefer the more hardcore 8-bit music.

The game offers a challenge, but it's not as hard as I though it would. True, after you beat the eight Robot Masters, you gotta play another four levels that you already played that are harder than before, with some familiar faces before Wily's castle (Where does he get the money for these castles? Seriously, has he got some insurance on his castle? Is there some sort of Evil Villain company that supplies people Like Dr. Wily? Maybe there's some promotional deal "Get defeated by something Blue, and we'll double what we normally give you!". This makes sense, this explains why Dr. Wily and Eggman are loaded every new game with expensive castles and robots, but Browser only get's these medieval castles. Maybe he's saving for some galactic adventure....), but that's the height of it's difficulty. The Wily Stages (for some odd reason, they call him Wiley, with an "e". Why? I'm not sure), are short and easy, but a little too easy for my liking. The bosses don't even put up much of a fight, but I like some on the nostalgic-ish bosses. The graphics are slightly improved, the detail on the New robot masters are greater than those from the second and first game.

This is a traditional action-platformer: you jump from brick to brick while avoiding pits and shooting robots. It's quite similar, in all respects, to other Mega Man games; however, this is the first time that you get a sidekick. It's also the first time you're allowed to slide instead of merely walking. Also, there is a mysterious character called Protoman who may or may not be your friend.

Rush is your dog who helps out by offering other modes of transportation when you need it. He starts out with the 'Rush Coil' ability to launch you to the top of the screen like a springboard; later he acquires the 'Rush Jet' ability to turn into a guided, floating platform to carry you wherever you need to go; and he also gets the 'Rush Marine' ability which is a submarine that works just like the jet except underwater and with the added ability to hop around out of the water(you can actually jump while on the jet but the jet continues to hover beneath you whereas you stay inside the submarine). All of these abilities function just like boss weapons.

How do those work, you ask? When you defeat the boss at the end of a level you gain his power - or at least a similar power. You may pause the game at any time and switch to any single power you have. It supplants your regular Arm Cannon with a limited - but superior - ability. The weapon ammo is displayed next to your energy meter. There are 8 of these, corresponding to the 8 main levels, even though there are 21 levels in the entire game. The bosses are as follows: Snake Man, Gemini Man, Needle Man, Shadow Man, Spark Man, Top Man, Magnet Man, & Hard Man.

Enemies will often supply you with both energy and ammo refills. You can also collect Energy Tanks which can only be used once but will entirely restore your health. You'll definitely want some of these for Dr. Wily's fortress, if not for the levels before it, since you start the game with only 3 lives. There are even Surprise Boxes lying around for you to find. And, of course, you do get infinite continues and a password feature to resume play at the beginning of any level.

Super Jump: With your 2nd controller, hold right and jump. Mega Man will jump higher than before. It'll stop when you stop holding right.

Slow-motion Robot Animations: This time, hold up on the 2nd controller. This will slow down all animations. Getting hurt while this cheat is on is a problem because even that animation is slowed down!

Zombie Megaman: Find a pit. Before jumping in it, hold right on the 2nd controller. Then jump in it. I think if you jump, Megaman will pop out of the pit. You can't shoot while megaman is "zombified." However, if Rush Coil is taken out, he can. Megaman will stay as a "zombie" until he touches anything that gives him health.

Frozen Enemies: Hold up+A on the 2nd controller. The enemies should be frozen.

Users who own Mega Man 3