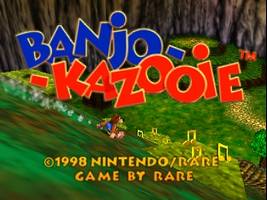 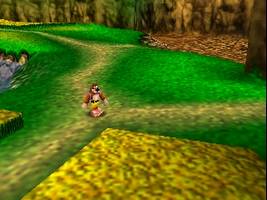 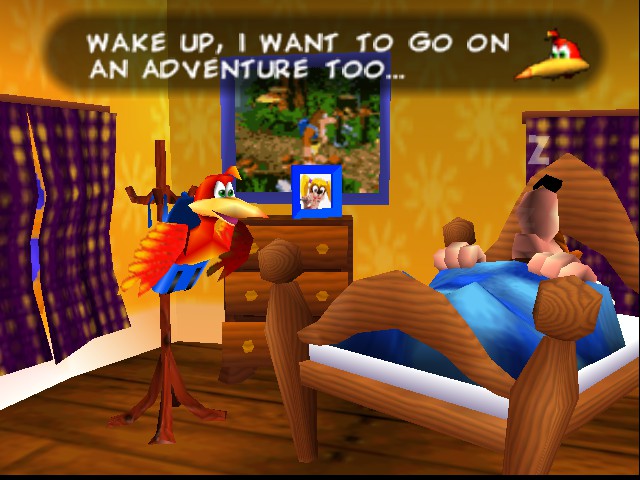 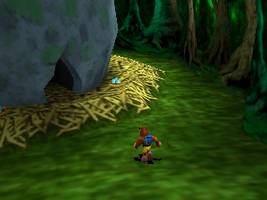 Trouble is brewing on Spiral Mountain! Gruntilda the witch, wildly jealous of Tooty the Honey Bear's good looks; is determined to steal them for herself! But even as she whisks the helpless youngster off to her tower, Tooty's big brother Banjo and his loud-mouthed partner Kazooie are hot on the trail to rescue her...Aided by the mystical shaman Mumbo Jumbo, Banjo and Kazooie must tackle gloomy swamps, scorching deserts, towering mountain ranges and spooky haunted houses on their way to the final confrontation at the summit of Gruntilda's Lair.

Banjo-Kazooie Review by: kabenon007 - 10/10
Various Musical Instruments
Banjo Kazooie is a hard game to review. I sat down at my computer thinking to myself: I loved this game. It's the perfect game. I want to be playing it right now, not writing a review about it. I could really go for some cheesecake right now. I love this game. But this love is hard to put into words. Especially words that justify the perfect rating I give it. I guess I give this game a perfect rating because I cannot think of a single thing I dislike about the game, and therefore it must receive a perfect score. So I guess this is going to be a glowing review filled with fluffy bunnies and rainbows, so those of you looking for some angst in your review, look elsewhere. Go read a review on the new Modern Warfare games, people seem to hate those games.

Banjo Kazooie is a wonder to play from start to finish. I seriously believe I had a towel underneath me during the entirety of the game, because my mouth was hanging open and I was drooling everywhere. From the opening cutscene to the final battle, this game continually impresses. You are a shorts wearing bear, because every animal game star must wear clothes. Not only do you wear pants, but you have a backpack too! But inside that backpack is not school supplies, or travel necessities. You have a talking bird stashed in there. Don't ask, you'll never know. And the zaniness doesn't change throughout the game. Your sister has been kidnapped by a rhyming witch who wants to suck the beauty from your sister. Thus you and your backpack bound friend must rescue your sister from the evil witch by collecting jigsaw pieces scattered throughout the nine worlds.

Each world is an absolute wonder. From Treasure Trove Cove to Clankers Cavern, the levels are absolutely huge and full of interesting places to explore and characters to meet and challenges to overcome. Not only are the levels gigantic, but they are all varied in style, from beaches to mechanical caverns, to a haunted mansion, to the overworld, Spiral Mountain and Gruntilda's Lair. And they are absolutely gorgeous, with the graphic power of the N64 really coming out. The textures are not as flat as Super Mario 64, and the polygons aren't as sharply angled.

Ok, ok. I'm getting too excited about the level design... let's move on to something else. The gameplay! Yeah, that. So, you start off with a basic skill set and gradually increase the moves you can do by unlocking them in the game. But you don't just spend skill points you earn from leveling up. No no, you get them from exploration. And by that I mean exploring until you find a molehill. Because a mole is the one who teaches a bear with a backpacked bird how to fly. Yeah, I never said it made sense, ok? Regardless, because exploration is the main goal of this game, collecting the jigsaw pieces and musical notes necessary to move to the next area, finding these molehills just comes naturally, and you never feel like the game is saying "Now you must learn this move" even though that is exactly what they are saying. They hide it well. And the moves keep coming throughout the game, whether it is the ability to shoot eggs, fly, run exceedingly fast, they are all unique, so you'll never confuse one with the other, and all are useful. There isn't one that feels tacked on, or an after thought; each move is just as important as the rest. And then there's the transformations. THE TRANSFORMATIONS! A helper named Mumbo Jumbo, a shaman, will transform you into various things in exchange for tokens that look like him. Little prideful, Mumbo? You can transform into a wide variety of animals, though my favorite has to be the crocodile, because it is hilarious to see a green crocodile wearing bright yellow trunks. I mean seriously? Those colors do not match your scales. I'm just saying.

Whew, I'm working myself into a frenzy here. Better lay off the gameplay before I pull something. Let's move on to the sound, shall we? The sound is perfect. I must especially applaud the music, because the score is phenomenal. Each song for each world fits the setting perfectly. Because the worlds themselves, a desert, a haunted mansion, etc, are all so stylized, the music should follow suit, and it does. Each song is instantly recognizable as belonging to a particular world. Also, for those who bash the fact that the characters speak in Mumbo while you have to read the subtitles, it was a deliberate choice on the part of Rare, the developers, to allow the player more freedom in reading the characters. Also, how many times have people criticized games for terrible voice actors? That's because it's really hard to get right, and there are few games that do. So I think it worked just fine thank you very much!

Goodness, I'm getting rather into this, aren't I? Forgive me, let's let bygones be bygones and move on, shall we? Yes. On to the... I don't really know what to call it... the overall presentation? Sounds good enough. The game exists in a world all its own. The characters, the moves, the story, would not fit in any other world. It is perfectly crafted, and Rare never leaves it, never brings in story elements that don't fit, etc. The banter that goes on between the characters, especially Banjo and Kazooie, is fantastic. Always hilarious. In fact, the game is constantly hilarious. Whether its Gruntilda rhyming absolutely everything she says, or the crazy characters you meet in the worlds, this game had me laughing out loud, which is something not many games can do. Usually the humor feels forced. But this game, thanks to brilliant writing and an unabashedly absurd setting, takes the humor and seamlessly puts the game through its side-splitting paces.

And the ending deserves its own special paragraph, albeit a short one, because I can't spoil anything. Suffice to say, the ending was completely unexpected, yet somehow supremely fitting and satisfying. It takes the entire game, shows you everything you've accomplished up to the end point, and tests you about each aspect. I can't describe other than the perfect culmination to any game. It is everything you were waiting for from the beginning and then some extra.

Banjo-Kazooie's fairy tale back story is reminiscent of Snow White's. A gnarled, ugly witch named Gruntilda asks her magical cauldron who is the fairest of them all. Of course, the pot's answer doesn't please the hag-- he singles out Banjo's sister, Tooty. When Tooty turns up missing, Banjo and his birdie buddy Kazooie set out to find her. The worlds in Banjo-Kazooie are gigantic, and chock full of crazy items to collect. Musical Notes, Puzzle Pieces, Mumbo Tokens, and Jinjoes are just some of the swag that Banjo must stuff in his backpack to complete his adventure. While some of the necessary items are simply stashed off the beaten path, others will require puzzle solving skills to turn up.

Users who own Banjo-Kazooie