Play Back to the Future (NES) - Online Rom | Nintendo NES

Play Back to the Future online with Nintendo NES browser emulation for free! Back to the Future (NES) game rom is loaded with features in our flash, java and rgr plugin emulators. Nothing to configure, we've done it for you!
Game's Soundtrack
Game's Characters
Game's Hacks
Play Retro Games
Game Browser
Netplay Lobby
Play Your Games
Xbox One Emulator

Back to the Future

Play Back to the Future Online Game 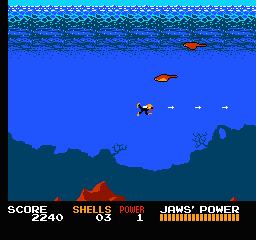 Back to the Future Box Description

You are Marty McFly, just a typical senior at Hill Valley High. But after getting behind the wheel of a nuclear-powered sports car turned time machine, you find yourself in the year 1955 where you've accidentally tampered with history. Now it must be corrected. You must somehow make sure that teenagers Lorraine Baines and George McFly (the two kids that will eventually grow up to become your parents) fall in love before the photo of your family fades away and you're left with nothing to come home to. It won't be easy. You'll have to protect George from Biff and his gang of bullies while doing your best to keep them from beating you up instead. To complicate things, Lorraine has a crush on you, so you'll have to dodge her advances while trying to figure out a way to get George and her to kiss at the school dance. Time is wasting and even if you manage to put all of the pieces in place, there is still no guarantee that you'll get back. It will all come down to one brief moment in time when the past, present and future all meet.

Back to the Future (Nintendo NES) Screenshots

Videos of Back to the Future Gameplay

Joinable Netplay Multiplayer Sessions for Back to the Future

Back to the Future Rom Hacks

Back to the Future Featured Review

Back to the Future Review by: Zircron Swift - 6.3/10
Back to the Future Review
I was told something about bad games. Something I've tried my best about to avoid and push to the very bottom of my mind. Something that others would scorn and rage at when they hear the name. I was told to never, under any circumstances, play an LJN game. The Rainbow of Doom, I liked to call it. Nothing good could come out of an LJN game, so in general, I try to avoid them. For the most part, I did so. Yet I was tempted, tempted to see if they were that bad. Most would consider it a mistake, but I call it an adventure.

The game starts you off at Hill Vally 1955 with no opening scene or text saying how you got there. But I can safely assume that this is after you (Marty, of course) got hit by that car, as during a level, there are three heads that I think resemble your siblings (What are they, anyway? A sargent, Wednesday from the Addams family and....benjamin franklin?), and they are fading away, so at least we know where we are chronologically. You need to collect clocks to restore your family's faces on the photo (if you can call it that), while dodging the towns population....and bees.

Why do clocks restore the faces? There is also a time limit, making two times to keep track of. Why couldn't the clocks restore the time instead? If all the faces disappear, then you lose a life. If you run out fo time, you lose a life. You can gain a life for every 30,000 points you collect (I'm sure it's that much). Through out the level, there's a chance you can collect a bowling ball, which is kind of like a weapon. I just have two questions? 1, Why bowling balls? And 2, if you are throwing bowling balls at people in the past and injuring them, wouldn't that create some effect in the future? You know, the butterfly effect and all that. WIll bowling exist when Marty gets back? I find the bowling ball very usefull for killing those bees. If your good enough and keep the bowling ball with out dying, then you can use the skateboard.

Ah yes, the skateboard. Makes you faster. To me, the skateboard is like a fariy in Zelda, or the Metal Blades in Mega Man 2, you just got to have it. If you keep a clear mind, the skateboard makes things a little easier, in fact. There are bowling pins in the middle of the street when you have the skateboard, and if you throw a bowling ball at it, it'll score you 500 points. It's a nice little reward for not getting hit by anything. I've clocked several perfect runs of a level and foudn out the fastest possible time to complete a level with the skateboard is 84 Marty-Seconds, and there are 200 in each level. What are Marty Seconds? They are the time united mesured in Back to the Future, as the timer runs a lot faster in the game than in real life. But doesn't the Super Mario Bros. timer also run faster in the game than real life? Then those are Mario-Seconds. Happy? But I digress.

When you get hit by an item, you lose all power ups, and also get penalised a few seconds as you recover. The controls aren't the most fluid I've seen, as the prospect of you continuesly moving forward and then trying to move backwards is quite stiff. Jumping is almost useless, an you'll mostly be moving with the d-pad, but jumping does have its uses in the up most emergencies. The graphics are pretty bright and colourful, although the level design is very repetitive (in fact, it's the same, only recoloured!), and the graphics, although nice at first, is all you get for the walking stages.

The music.....urrgggg. I couldn't get it out of my head, it was a nightmare. The style of the music reminds me of Type-A Tetris music for the NES, but instead of the music suggesting you should play more and more, and your cooperation of wanting to play more, it does the opposite, in a manner of speaking. It annoys you, gets into your head, forcing you to do something you don't want to do, like watching a puppie drown or something crule and sick like that. Most people turn off the game by now. But when I continued to play it, the music got to me, the music changed, it seemed less annoying. Weather the music took control of me or if I simply was imune to the terrible wailing of the music, I do not know. All I did know was this: I liked it. It was strangly catchy, addictive and a little soothing. But this is a LJN game. I must be deluded....

After every four walking levels, you come across what I like to call the "Bonus Different Stage". Everyone of them is different. Weather you are throwing milkshakes at bullies, or collecting notes with your guitar, there's bound to be something for everyone at these stages. At the bully stage, you can press the B button to activate some sort of nuke to kill all the bullies on the screen. After a certain amount of bullies, a wateress walks up and hands you a milkshake, and that works as a sort of nuke for bullies.....don't ask me how. It's pretty challenging at first, but with a little practice, it's no problem. I got to 99 bullies twice (it won't go any higher). It's not that bad, in fact.

The walking stages are pretty addictive, accrually. The controls take time to get used to, but when you do, your practially dancing with the bees. Mastering the skateboard really helps speed through the levels. You can destroy clocks with your bowling ball, but I for some reason find it comical when I do it. The enemies seem to throw this purple ball around, and I don't know what it is. If it touches, you, it counts as a penalty. I think I'll call it a Paradox Ball. These are really annoying at times, but it adds challenge to enemies that just stand still. The only thing that increases in difficulty is that the enemies move faster. By the last four levels, the bees move really fast, and that's where real skill is needed to dodge those menaces.

Overall, I give this game a 6.3/10        After completing this game to the end, and reciving very little satisfaction for it, I can say only this. I like it. I think it's a pretty fun game. True, the levels are practially copied all the way though, the music sucks and the relation to the movie is pretty low, but I like it. Consider it on of my guilty pleasures.
Graphics 7   Sound 4   Addictive 9   Depth 4   Story 3   Difficulty 7

Back to the Future Game Description

Based on the hit movie, Back to the Future let's you take control of Marty McFly and try to set time right and get back to the future. You navigate a vertical scrolling screen while avoiding obstacles and picking up bonus clocks. After five levels, you play a minigame like throwing milkshakes at bullies, playing guitar, and blocking kisses from your mom.

Back to the Future Reviews

Back to the Future Highscores

Back to the Future Cheat Codes

Turn off Annoying Music during gameplay

Ever been annoyed by the repetative music of Back to the Future for NES? Worry no more... pause the game, hold the directional pad, select, A and B simultaneously, then unpause the game... won\\\'t get rid of the sound effects, but at least the music won\\\'t be bugging you... enjoy!

Back to the Future Game Genie Codes

Back to the Future Threads

Back to the Future Guides and Walkthroughs

Users who own Back to the Future

Game Characters in Back to the Future

Comments for Back to the Future