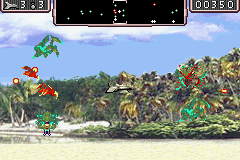 Mega Man Zero 3 continues the saga of the main character, Zero, and introduces new gameplay elements that build and expand upon previous games in the Zero series. While Zero and his Reploid (robot) allies continue the fight for peace in Neo Arcadia, a new reploid, Omega, attempts to brainwash the Resistance. Now, as Zero, you must save your allies by using new customizable chips, a new Recoil Rod weapon, Cyber Elves that increase your abilities, and secret disks that offer valuable information.

Mega Man Zero 3 Review by: Hidden Phantom - 9.7/10
Megaman Zero 3...what else?!
This was my first game of the Megaman Zero series, a series that has changed my life in so many ways, including my involvement on Vizzed as well as my eventual position as a Moderator in the Megaman forum, a forum which I gave all of my viz to create.  This game was given to me by a friend in the 6th grade, along with her Gameboy Advance SP, and I PLAYED THAT GAME.  So, after completing it a record 7 times, I believe that I am certified to make a review to properly suit this masterpiece.  So, without further ado, The Review...of Megaman Zero 3!

Graphics: 9
No offense to anyone, but the RGR window on Vizzed does not show GBA games any mercy.  It spreads individual pixels, making the game have a blocky, primitive look.  So, my rating of the graphics come from what I see on my GBA screen.  The graphics are great, the animations and screen transitions are astounding, but I do have ONE complaint about the Megaman Zero series as a whole.  Well, two actually.  One: Ciel looks distorted. Two: Zero's appearance doesn't change at ALL during the entire series.  But, other than these, I have no complaints!

Sound: 10
The soundtrack for this game is unbelievable and unforgettable.  It has that signature Megaman Zero "feel" (If you don't know what I mean, listen to the soundtrack inside the Resistance Base.), the music is catchy, and it creates a mood specific to each level, you remember the level in all it's entirety as you listen to it.  Almost no other game series in EXISTANCE is capable of this.  Also, the mood set by the music is PERFECT for that stage, down to the tone and individual melodies and harmonies. (Sorry if I'm ranting, I take my music pretty seriously) So all in all, I have NO complaints here.

Addictiveness: 10
As I've said before, this game incorporates the idea (well not really idea at all, let's say "Feeling") of extreme helplessness when you lose, especially if you're on a supreme 100 Point perfect winning streak.  And, as I said in my Megaman X review, it's now a "rage quit" kind of feeling of anger and hatred, it's the kind of hatred that is only satisfied by revenge, which is EXACTLY what you get when you PULVERIZE that sucker who's been giving you all that trouble! TAKE THAT, OMEGA!

Story: 10
Ok, I'm just going to put what I did in my review on the first Zero game...
Sorry if you don't like this but...I need the release of my feelings...
So, the game starts off with Zero investigating a craft in the Direlict Spacecraft zone.  Inside was Omega, who was banished centuries ago due to involvement with the Elf Wars.  He has just beaten Fefnir and Leviathan, and battles Zero.  After that, the SECOND Copy X shows up to greet you and Harupia (who has just shown up). He forces Harupia to step down from his supreme position, and then reveals Dr. Wiel's position in all of this mess.  Going back, the game begins...

Depth: 9
This game is very large, as the Cyber Elf system and EXP skills will force you to play through the game MANY times (unless you're a hardcore maniac, then I feel sorry for you.)  In other words, with hours of play and 2 HUGE systems of completion, each with over a hundred items, this game will have you playing it over...and over...and Over...and OVER...AND OVER AGAIN!!!

Difficulty: 9
This game is not too hard, seeing that I of all people completed it, so it can't be TOO hard...

In the third installment of Capcom's Mega Man Zero series, you, unsurprisingly, play as Zero. Continuing where the Mega Man Zero 2 left off, you have to find and neutralize the recently escaped "Dark Elf," before it's able to brainwash the Resistance for the purpose of conquering Neo Arcadia. In addition to the old Cyber Elf system, this game also contains a new "chip" system, where Zero can gain new abilities by finding chips and installing chip in himself. But they didn't decide to abandon the Cyber Elves in this game by giving them nothing new. No, in order to extend the life of the Cyber Elves, they added the new concept of "Cyber Space" to levels, where you enter a door to Cyber Space and are allowed to use each Cyber Elf as much as you please without them dying. However, there aren't too many "Secret Disks" (items that can contain anything from profiles of characters to Cyber Elves to new chips) in Cyber Space, so it's better to spend more time in the normal level.

Users who own Mega Man Zero 3