Ninja Gaiden Review by: Sephirothxxxxxx.. - 9.9/10
Ninja Gaiden - Fast paced and Super Hard
Today I'm going to review Ninja Gaiden for NES. This game is a perfect example of how to do difficult, high octane side-scrolling action on the NES. Developed by Tecmo and released in 1988 in Japan and 1989 in North America, Ninja Gaiden made a massive gaming innovation by being one of the first games to ever use cutscenes. While it had its great points like interesting story and nice graphics, Ninja Gaiden also proved to be very hard and sometimes unforgiving. Read along as I rate the aspects of the game and, if you haven't played it yet, convince you to try it for yourself!

Graphics-9- The graphics in this game are very well done, and this shows the best in the cutscenes. The developers did a great job of making detailed sprites and environments that have done well at standing the test of time. There's rarely a time in Ninja Gaiden that you will see an enemy that looks similar to another, completely different one. There is lots of variation, and it looks great. The cutscenes are the most detailed aspect of the game. They are smoothly animated, very well done, and when I see them I can't help but think of "Fist of the North Star".

Sound-10- The sound in this game is phenomenal. Everything about it- the music, sound affects, everything - is great. The levels each have a great theme that perfectly fits their design. The developers took special attention to detail when adding sound effects. Your character will make a landing sound upon landing, every weapon makes a noise when swung or fired, etc. If I'm not mistaken, there is a sound effect for nearly every, if not 100% every, thing in this game.

Addictiveness-10- This game deserves that entire "10" rating when it comes to addictiveness.  There's always something to kill on the screen, and the levels are splashed with point bags and power-ups. Top it off with wall-jumping and high speed hacking and slashing and you've got a recipe for a successful side-scroller.

Story-7- The story in this game is interesting. Here's the basics: your father, Ken, has recently been killed in a duel and before he leaves  for this duel he leaves a letter behind for your character, Ryu Hayabusa. The letter tells Ryu to find an archaeologist named Walter. Ryu finds him, learns of 2 very important items that hold the potential to end the world, and sets out to find them. Along the way you will meet some significant characters and find yourself in numerous events all while trying to a) avenge your father and b) keep these 2 items from falling into the wrong hands. The story may sound cliché in this review, but it is in fact an interesting story that is told very well through the cutscenes in a way that no game could tell a story in the same way before it. If you haven't noticed yet, I place big emphasis on these cutscenes. They do their job very well and I have found them to be unique.

Depth-7- I rated the depth with a "7" because, despite being a side-scroller, there is a lot to do. There is a slew of enemies, which succeeds in making the game longer, and on top of that the game has a grand total of 20 lengthy levels and 8 bosses that only become harder and harder as you progress. However, I feel this game could have been even better if they had implemented a 2-player mode and a second story, similar to "second quest" in The Legend of Zelda.

Difficulty-8- The only thing that keeps this game from being a solid "10" is the fact that it isn't as hard as its NES sequels: Ninja Gaiden 2 and 3 (2 is harder than the first one, and 3 is drastically harder than the 1st and second.). The first level is a normal difficulty level that can prove to be a breeze even for new players. After that, though, it starts to take a hairpin turn into Difficulty Avenue. Only when you beat this game can you truly be a "big boy now". It only gets harder and harder from the start, and you will need some serious patience if you want to brave this game. Thankfully, the developers gave us a saving grace by giving you infinite continues. I won't try to spoil anything by talking about bosses and such. You will just have to play for yourself.

Well here we are at the end. I'll be honest, I tried to not sound bias when I did this review. I will be honest, I never played this game as a kid. At the time of making this review, I am only 16 years old. When you live in the age where "graphics mean everything" you don't always come across someone with such a passion for these gems as I have. That hopefully proves that I am not blinded by the rose-tinted goggles of nostalgia - I really do feel the way I do about this game. I hope you enjoyed reading this review as much as I did making it. The game is serious fun to play, but I'm not responsible if you break your keyboard, or in my case, the controller. Now if you will excuse me, I have some gaming to do. *Runs into the basement and turns on his NES.*

My Reviews of the Ninja Gaiden Series (Click one): 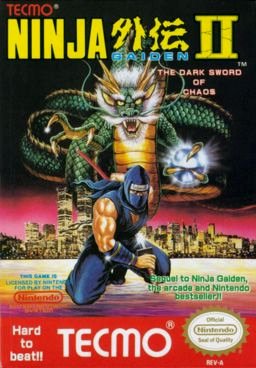 Ninja Gaiden begins with a cinematic animation in which 2 ninjas duel to the death; one goes down. It is revealed that the doomed ninja is the father of Ryu Hayabusa. When Ryu learns of this, he embarks on a quest to find out who killed his father and why. This quest takes him to America to find an archaeologist with whom Ryu's father was working. From there, Ryu becomes embroiled in an evil, supernatural conspiracy involving a villain named Jaquio who has plans to use an ancient castle and some relics to unleash a terrifying evil upon the world.Ninja Gaiden is a side scrolling game where Ryu the ninja can run, jump, and slash with his ninja sword. He can also attach to any vertical surface. Powerups are littered throughout the landscape that allow Ryu to toss fireballs and ninja stars, and perform other feats.Ryu will battle through urban city settings, forests, jungles, snow covered castles, underground railroads, and ancient castles. A major feature in Ninja Gaiden are the cinematic scenes -- sometimes fullscreen -- through which the storyline unfolds.

Users who own Ninja Gaiden