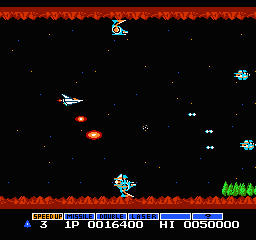 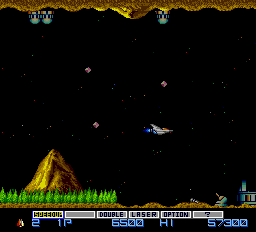 Gradius III Review by: The_Greater_Zion - 9/10
Gradius III
This is a review submitted by a long time fan of Gradius III, since it's first arrival on the SNES console back in 1991. The reason I'm taking the time to write a structured review on this game should be obvious. It is one of my favorites, and as an underplayed, fairly unrecognized gem, I feel it's only right to give this game both the highlight and justice it deserves.

Let's go ahead and start with the graphics. Gradius III was released originally as an arcade game in Japan back in 1989. That being said, for its time, this game's visuals are stunning. You have a selection of scroll-by worlds that your battleship will explore and conquer; from deserty terrain to lush green jungles, each world offers its own distinct feel. When you're not fighting aliens on different worlds, you're flying through space to get to your next location, which helps players get into the feel of piloting a battleship.

No question, Gradius III has the best music/sound track out of any game I've ever picked up. And this coming from an avid gamer, that says a lot about a game that's 23 years old. Konami did a solid when they orchestrated the music. It definitely has that outerspace vibe, yet this gaming gem offers players a different musical piece each level of the game. That's an amazing feat for its time.
The introductory music when you pick and choose your battleships arsenal is epic and upbeat, giving you the sense that an epic adventure awaits. From beginning to end, music is a treat to the ears.
The sound effects include your lasers being shot, with each individual laser having its own distinct sound. The aliens and boss ships make the sounds you'd expect from aliens and boss ships, such as gurgling when your lasers make impact, or exploding when you defeat another battleship. All in all, it's enough variety to keep the game from getting stale.

I remember being young when this game came out, and popping it into my SNES console for the first time. The game immediately captured my imagination, because at that moment I've never been entranced and involved in a video game to this extent. After it was beaten, I wanted to start over and beat it another way, taking full adventage of the games expansive arsenal. Even after so many years have passed, it's still honestly one of the funnest games I've ever played, and I find myself coming back to play it again and again.

There isn't much going for Gradius III in the story compartment. As far as I can conclude, you're a Gradian pilot from a planet called Gradius about to embark on a heroic journey to save mankind from bacterial-aliens. The galactic empire spent a Hundred-Billion dollars to craft your ship and it's up to you to put its weaponry to the ultimate test. However, this leaves many questions unanswered. If there was a single gripe I could make, it'd be that Gradius III didn't offer more background before launching you into space.

There's not a whole lot you can find in this field either. There are a few secret locations on different worlds you can find and in a sense "explore off the beaten track". The weaponry arsenal is expansive, with multiple lasers, shields, and power ups to choose from, making every game play different. This isn't a bad thing because of what genre of game it falls under. In my opinion, it's all in the game play, which more than makes up for Gradius III's lack of depth.

The difficulty for Gradius III is well rounded, because even though easy mode is simply a cakewalk, you can also choose hard mode which I find very difficult to master, and then medium mode that's a little bit of easy and hard rolled into one. The difficulty factor dictates how often an enemy will attack you, and how much health a boss has. It can also effect certain attributes such as speed on specific enemies. And finally, there's an unlockable 'arcade mode' that simulates how Gradius III played on arcade. I haven't experienced it, but from what I gather, if hard mode gave you some trouble, arcade mode will definitely give you a run for your money.

This is where Gradius III shines. There's an old saying, 'the best things in life are simple' and Gradius III sticks to that motto with grace.
As soon as you begin, you'll notice a power-up bar at the bottom of your screen. Accessing these through boosts that you obtain from some types of fallen enemies unlocks different features for your ship. The first one that all battleships have access to is the "Speed up." This is very important as it dictates how fast and sensitive your cruiser is to control. There's a balance in the mix, because if your ship is too slow, you'll likely find yourself in a heated boss battle without the much needed elegance to dodge a bullet.. much less a laser. However, if you put too many boosts into "Speed up", your ship will hence be too fast, and more players have lost simply by crashing into the ground because their ship was no longer drivable.
The second slot on the power-up will unlock your ship's missiles. Whatever type you chose, these are one of the most important weapons.
Don't underestimate the power of a dropped mini-bomb, or the deadly torpedo. And the hawkwind, a missile capable of splitting itself to travel up and down, is an explosive to behold.
The third slot is the split-shot for your ship's standard rapid-fire. It isn't much on its own, but add a second barrel to your ship and you've got some real fire-power. There are 4 different types to choose from: the diagonal split-shot, capable of shooting diagonal and forward.
You've got the doubles, which fire directly behind and forward (not recommended). You've got the split-shot that fires directly above you as well as forward, great for taking out enemies that tend to cling to the ceiling.
The fourth slot are your lasers. Bigger, badder, and distinctly unique, your lasers will be the weapon that your ship gives a standing ovation for when the aliens are vanquished. You get a selection of 4 different lasers - The ripples, the T lasers, the E lasers, and the C lasers.
Like any great weapon, they all have their pros and cons. For starters, the ripples are the fastest rapid fire lasers, and spread out the farther they travel, but are significantly weaker than any other of the lasers. The E laser is the ripples polar opposite. It is slow, takes a charge time before firing, but is capable of taking out a boss in two shots! The T laser is your 'middle man', stronger than the ripples, yet faster than the E laser. The C laser is probably the most unique, shooting straight, long beams at your enemies, meaning there is very little gap between your first and second shot. Play around; they're all fun to try out.
The fifth slot is my personal favorite. So, you think that you're tough, with your missiles and lasers? How about if I duplicate your fire power?
Not good enough.. Okay, triple? You want more fire power? How about if I quadruple your fire power. That's right.. Quadruple. Slot five on the power-up bar are in a sense, your 'familiars', tho Gradius calls them 'options', replicating every shot you make, and every missile you drop. They're invincible too, meaning once you get em, they're there for good. The different options you get to choose from dictate their traits, from staying close to your ship to imbue more firepower on the spot, to options that spread across the screen to get more fire in more places.
All are great; finding the one that adheres to your play style is what it comes down to.
The sixth slot is your shield power-up. Quite a bit of variety here, from shields that revolve around your ship, to dual shields that stay in front to block oncoming fire, to a power up that shrinks your ship, making it harder to hit. Hence the name, this function is here to keep you alive.

When you embark on a new planet, it's 2D rambo all the way to the boss. Dodging enemy fire is only half the battle. The world itself seems like it's out to get you. Volcanic eruptions, ship-eating vegetation, and acidic bubbles are some of the few obstacles you'll need to deal with. The boss battles range from 'lolweak' to truly edge-griping ship battles. For instance, there's a world that will throw 4 ship battles at you back to back, with alternating strategies. You'll need to think on your toes in order to survive.


In conclusion, I give this game a solid 9. It deserves no less in my opinion, and if you get a chance, you've got to play it!

Loop 3 is very hard
>>
Click Here
to View All
Highscores
>>

At the title screen, hold L and press A, A, A, Start 30 Extra Ships
In the Options menu, highlight the Game Level, and rapidly tap the A BUTTON until the level turns into ARCADE. Arcade Mode
At the title screen, press the X button as many times as you can and then press start before the screen fades out. Extra Credits
Pause the game and press Up, Up, Down, Down, L, R, L, R, B, A Full Power-Up
At the weapon select screen, press Right on the D-pad to enter Edit Mode. Then press X, Y, X, X, Y, Y, X, Y Random Weapon Select
Pause the game and press Up, Up, Down, Down, Left, Right, Left, Right, B, A, Start. Suicide
Hold L + R and Start, then press Select. System Reset

Users who own Gradius III