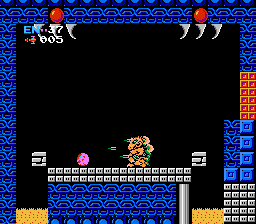 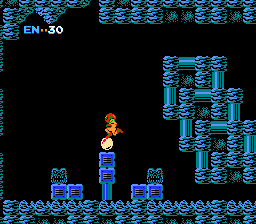 While lending mission support on planet SR388, interstellar bounty hunter Samus Aran is attacked by an X parasite, an organism with the ability to mimic the abilities of any creature it infects. Near death, Samus is saved by a vaccin made from the DNA of the last Metroid--the X parasite's only natural predator. When the X spread to a research station in orbit around SR388, a weakened Samurs is forced to exterminate them all...or die trying.

Sound: Out of all the games that I've played on Vizzed or on my Game Boy Advanced; Metriod Fusion has the most unique sound bits. I can honestly say that the music overall is really well script. The music can start out slow while you play through each Sector, then all of a sudden you hear an emergency warning and the music starts to pick up. What I would say is the best part in terms of music, is how the music adds to the graphics. When playing in Sector 5, the music sounds "chilly", "crisp", and almost "frosty"; adding more cold to an already cold enviornment. When playing in Sector 4, the music sounds very fluid; adding to the presence that you are in an Aqua Enviornment. When one of the Emergency, Time Limit parts the music is fast paced, adding to the mood that you need to get out or your going to die. Overall I give the Sound a 10.

Addictiveness: Metriod Fusion is a very addictive game. The fact that you can enter one room, kill all the monsters, leave, re-enter, and then kill the same monsters you already killed seconds ago, makes the game great for someone who just wants to kill stuff over and over again. The Boss Battles are unique and different. When you kill a boss, you take pride in the fact that your newly acquired suit parts are going to come in handy later on in the game and make you feel so badass. The common enemies you face all have unique ways of damaging you; wheather it is using a beam weapon, raming you, fireballs, or slashing you; adding a variety of ways to either kill or avoid them. Overall I give the Addictiveness a 10.

Depth: The one part of Metriod Fusion that is lacking is depth. Yes you can get upgrades to your Health, Missiles, and Power Bomb; but once you collect all the upgrades; you don't have much to do afterward. Overall I give the Depth a 7.

Difficulty: Metriod Fusion at least to me is very tough. Bosses like The Security Bot, Nightmare, Ridley, SA-X, and The Omega Metriod are some of the hardest bosses to beat if you don't have a lot of Missiles and Health. But after those 5 bosses; the other bosses and minor enemies are not tough to beat; but they are still unique and fun to kill. Something I should point out as because we are playing on a Keyboard, you can only hold down 2 buttons. So lets say your aiming upward to shot missiles at Ridley; he injures you, forcing you out of your shooting spot. Because you can't move, aim, and shoot all at the same time it can become very difficult you those types of fights. Overall I give the difficulty a 10.

Closing Arguements: Overall Metroid Fusion is a great Game Boy Advanced Game to play with amazing graphics, challenging bosses, and an intense story. Overall I give Metroid Fusion a 9.8.

I hope you guys enjoy my review and if you have any questions please feel free to post below in the thread. Thank you for reading!

Metroid Fusion is the direct sequel to 1994's Super Metroid. The game begins as Samus Aran is sent back to planet SR388 to assist a Biologic Space Labs investigation team. While on the planet's surface, Samus is infected by a previously unknown parasite, known as X. The X parasite nearly kills Samus, but fortunately she is saved by a vaccine made from the Metroid she saved on Zebes. Shortly thereafter, an explosion rocks the Biologic Space Labs. Now Samus must investigate the Space Labs, which are orbiting SR388.

This game is similar, in terms of gameplay and structure, to the classic side-scrolling Metroid games. The game consists of a large inter-connected environment. As Samus learns a variety of new moves and weapons, she is able to explore new areas of the Space Lab and unlock the secrets of the X parasite.

Under 2 hours with 100% - Samus with suit off, standing up with a clear image of her to the left. Best Appearance

Under 2 hours, under 100% - Samus with suit off, leaning up a ledge with head leaned back.

Over 4 hours, under 100% - Nothing Special. Worst Appearance.
Secret Message

To see the secret message, you must defeat Nightmare in Sector 5 (ARC) and return to a Navigation Room WITHOUT getting the Diffusion Missile upgrade. A conversation between you, Adam and the Secret Guy will commence.

Users who own Metroid Fusion