X
This game doesn't have any screenshots

Videos of Shadow the Hedgehog Gameplay

Shadow the Hedgehog Review by: Lexatom - 9.2/10
Shadow the Hedgehog Review - ow the edge
Welcome to another very special Lexatom review. Today we will be reviewing Shadow the Hedgehog. Sonic Team wanted to appeal to a wider market, and since guns were appearing in a lot of popular games, they decided to put guns and edgy stuff in this game. However, Sonic is too "good" to use this stuff. So they came up with the brilliant idea to use Shadow instead. It was perfect! Shadow the Hedgehog released on November 15, 2005 for the Gamecube, PlayStation 2, and Xbox. Many people were triggered by the fact that there was cursing and all this other edgy stuff in this game. To those people, I say this: You are dumb. (Just kidding please don't sue love you). Enough with the random chit-chat. Let's dive into the review, why don't we?

The graphics in this game are awesome! In each and every level and location, you can clearly make out what the developers were trying to go for. The character models look great in-game, but in some of the cutscenes they look kind of gross looking. I can deal with it for the most part. I think my favorite part about the graphics is how they made the bullets look. I dunno, I'm weird. They don't look like real bullets to me, which is perfect for the Sonic universe.

I think my love for Hard Rock/Metal music stemmed from this game. You see, this was the second Sonic game I ever played in my life. When I heard some of the music, I was instantly in love with it. I started listening to similar songs that I found on my dad's iPod, heh. The main theme of the game is "I Am (All of Me)" which is absolutely fantastic. I love almost the entirety of this soundtrack. Each song fits in well with the current location you are in, and to me, goes far beyond that. It fits much more than it SHOULD, and I absolutely love it. The sound effects in this game are also wonderful, specifically the sound of shooting. I'm not trying to sound edgy, I'm being serious. I also like the voice acting in this game, especially Shadow's. I think Jason Griffith does a WONDERFUL job voicing both Sonic and Shadow.

I find this game to be pretty addicting. The only times I ever see myself not playing it is either because I got angry from dying a lot (lol) or there are other games waiting for me to play them. The former one happens more often, sadly. Due to the many paths this game allows you to take, it has a very high replay value. If you finish all main paths, then you unlock the final path, otherwise known as Last Story. I love it, and it just gives me reason to keep on playing.

This game's story is amazing, and is one of the reasons Shadow is my favorite character in the franchise. The only issue I have with the story is that some stuff happens differently than what happens in other paths, so it gets a little confusing on which of them actually happened. However, it's most likely that all of those events occurred, so it's not that big of a deal to me. The Last Story is particularly interesting, as it explains the truth in many questions that a lot of people had asking. For example, is the Shadow we are playing as really an android? Throughout the game, it tells you that the Shadow you are playing as is actually an android created by Eggman. During the final boss fight, Eggman tells Shadow that he was lying. Eggman saved Shadow at the end of Sonic Adventure 2 before he died in space, revealing that we are playing as the true Shadow. Amazing. Bravo, Sonic Team.

As I explained a bit earlier, this game allows you to take many different story paths depending on what missions you do in each level. If all you do are the Dark missions, that story route is known as True Dark route. If you only do the first Dark mission and then complete the neutral missions in the levels to follow, it is known as the Dark route. If you only do Neutral missions, it's known as the Neutral route. Vice versa for Hero missions. In addition to having to play at least every level, you must also defeat each boss at the end of the story routes. I think there are 2 for each route. So for instance, you're on the last level of the True Dark route. If you complete the Hero mission in that level, you fight Black Doom. If you complete the Dark mission in that level, you fight Sonic and Diablon. You must defeat all of these bosses before you are allowed into the Last Story.

Some of the missions in this game are as easy as can be. However, there are always those missions that make you moan because you REALLY don't want to do that mission. Some missions are HARD. I remember one mission involved FINDING THE COMPUTER ROOM. Uh, I mean, ignore that. One of the missions involved healing around 20 (I think) soldiers in the ARK with the healing pod thingies near the bodies. Problem is, they are scattered all over the ARK and the place is HUGE. The map doesn't help me at all, it just confuses me more. So then you end up wandering all over the level map for like 5 minutes, but it feels like forever. Eventually, you find the last thing you need to do and scream out in excitement.

Shadow the Hedgehog defenitely is, if not the most controversial game in the Sonic series. Some people don't like it, others do. It's one of those games that's in the middle. I for one, love it. Putting Shadow as the main character of his own game was a brilliant idea, and they executed it brilliantly. Thank you for reading this review. Comments/Questions are always appreciated. 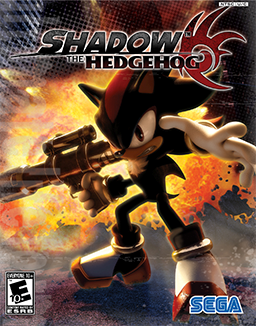 Shadow the Hedgehog Guides and Walkthroughs

Users who own Shadow the Hedgehog

Comments for Shadow the Hedgehog