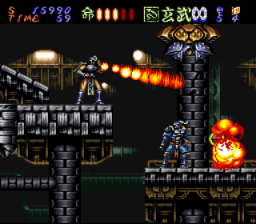 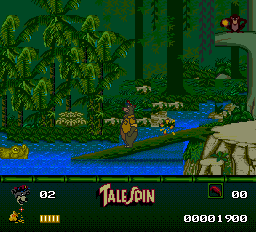 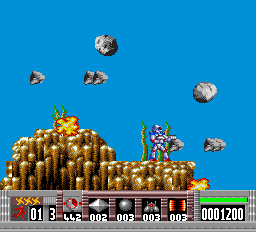 Turbo Grafx-16... If you're into retro gaming and his consoles, you should have heard about this console. If not, let me talk a bit about it: This console (named PC-Engine in Japan) was the result of the NION between Hudson Soft (who was looking for financial support for the making of a console) and NEC (who was looking for a way to enter to the lucrative Video game industry) Even if the console was a big success on his beginnings... With the time (and with the apparition of the Sega Genesis and the SNES) the console started to lose terrain in sales, until it ended being forgotten. Fortunately, This console left us a bunch of pretty decent games, between those: Bonk's Adventure. The game I'm going to review today... So, As usual, sit down and start with the reading!

Story: Back in time, when the Dinosaurs used to live in the Earth, there was a Kingdom, which was Ruled for the Princess Za. Everybody on the Kingdom used to live without any problems... Until, one day, the evil King Drool kidnapped the Princess and took the control of the same. And like if that wasn't enough. He also washed the brain of some of the inhabitants of the Kingdom... And the only one who can defeat Drool is Bonk, a Cave boy with a really big head. So, that's how he decides to start his Adventure to defeat the evil King and save the princess. (5/10)

Graphics: In two words: Pretty good... The Backgrounds and enemies in general have many color and details...  Just look at their Facial expressions and the decoration of the Stages. Animations are decent and fun to watch. Nothing bad about these. (8/10)

Sound: This game counts with a great soundtrack. Full of catchy and memorable songs. You'll be humming them in less than you except! SFX is good also. Simple, but good. The sound that Bonk makes when walking, or the sound that is heard when an Enemy is defeated are nice to hear. Sounds crazy... But those give the game it's own identity. (8/10)

Addictiveness: An addictive game, that's what we're having here. After playing it for the 1st. Time, you'll be coming for more of it. I'm sure of that. His simple Gameplay and concept are what make the title really enjoyable and fun to play. (8/10)

Depth: This game is, also, very deep... This is how you play: Like in every plat former, you can move Bonk to the left of to the right, also, you can make him Jump. The only way to get rid of the enemies, is by head butting... yes, by using headbutts. You can attack them in the ground, or by jumping and then head butting. That's not all... Bonk also can climb walls by using his teeth. Through the game we can find some helpful items (such as the Meat pieces, that give our hero temporal invincibility and the ability to freeze enemies, the vegetables and Hearts, that fill part of our health, the Smilies, that are like the Mario's coins... With the difference that the smilies doesn't give extra lives, just points, and the Heart Containers, that extends our Life bar) all of these can find inside of Flowers. Every stage is divided into different parts. At the end of the last part, we'll have to fight a boss. If we succeed. We'll go onto the next stage, and so, until finishing the game. (8/10)

Difficulty: High... Yes, high. Since the 1st. Stage, the game will try to stop you as soon as possible. And as long you progress, it becomes more harder to beat. Even some Bosses are capable of killing you in one hit! (9/10)

Bonk's Adventure is one of the most decent platformers out there... For something it's the most sold game of the console. So, if you have the chance... Play this game, you shall not regret it.

Prehistoric platform game where you are in control of a baby and have to guide him through the levels avoiding all manner of strange nasties.The game is very similar to every other platform game you have ever played, but it does have its own unique features such as the ability to climb vertical walls with your teeth and do a diving head butt from a jump. Power ups come in the form of lumps of meat and give extra speed and invulnerability in the later stages.If you have ever played chuck rock then you know what to expect from this, a bog standard platform game with a prehistoric theme.

Users who own Bonk's Adventure