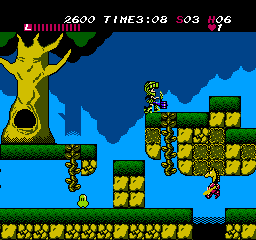 Mario Bros Review by: Zircron Swift - 9.4/10
Mario Bros. Review
Mario Bros. was once an arcade game released in 1983, two years after the release of Donkey Kong. Mario came a long way in those two years, as he was once a carpenter with a pet ape in Donkey Kong, then an evil villian in Donkey Kong Junior, and now he's a Plumber. I must say, not everyone can say that on their CV. This was the first game that told us Mario's surname, which some of you might already know as "Mario" (making his full name "Mario Mario", I'm sure you know), but this game was also the first to indroduce Luigi, the Green Wonder as I like to call him. Let's take a look at the NES port of this arcade game classic.

The story appears to be that you are clearing up the sewers of turles and crabs.....Why are there turtles and crabs in the sewers in the first place? Are they the kind that live down there? Or did they get lost and just ended up there? There are also coins you can collect.....because people normally throw money down the sink. Maybe it's how they pay Mario for his job. Kinda rude if they do it like that....but I digress. To clear a stage, you have to defeat every enemy in that phase. But you can't just jump on the enemies like in Super Mario Bros., you have to hit the platform underneath them and then just kick 'em out of the way. This earns you 800 points, but if you are able to kick more than one in quick sucession, you'll earn bonus points.

But if you don't kick them for too long, they'll get back up and are a little angry with you, with a change of colour and an increase of speed. The last enemy is always angry for kicking your friends, and will go to top speed. The crabs take two hits underneath to become flipped, but what exactly happens to them on the first hit? Are they wearing.....underwear? Why?......scratch that.....how? The bugs can only be flipped over when they are on the ground, and as they hop, you need a little sense of timing to get them.

There is a POW block that will flip all enemies on the screen if you hit it. You can only use it a number of times, so use it wisely. Every once in a while, the game will "test your skill" with a mini-game. All you have to do is collect all the coins on the screen. Easier said then done the first time round. Collect all the coins, and you'll get a 1-up and a lump sum of points. These get harder as you go along. The level layouts get hardas as well. There are ice paltforms waiting for you in future levels.

There are four different game types, two for each number of players. Game A is your standard game, while Game B gets harder faster than Game A. If your looking for a challenge, game B is the way to go. You can play with someone else in 2-player mode. You can work as a team to get as far as you can in the game, or you can squabble when ever you can to get that coin to trick people into dying when they think they're going to knock out an enemy. Mostly, I try and do the second thing and get the most points over my opponent. The results are normally very amusing on both ends. Wait a minute.....Mario has blue hair.....while Luigi has green hair....Why does this remind me of something?.....  =O   Urban Champion forshadowing! If you're not careful, you'll get hit by some fire balls that appear from time to time. The red one is rather straight and forward, while the green one looks a little....drunk shall we say, as it moves.

The graphics are somewhat simpler than the arcade version. The koopas, erm....turtles look rather like the Super Mario Bros. ones. Maybe they resued the ones in here for that game and ramped them up. The background is black, which annoys me, but does suit the sewer surroundings rather well. The animation for the enemies moving and you walking is decent. It was an arcade game after all. The music is pretty catchy. While there is no main theme through-out the level, the little tunes before and after the game are classic.

What I don't quite get is the sound when you walk. You make this "beat" as you take every step. Continuesly walking would result in a kinda level theme, if you want to call it that. The controls are a little slippery. You have to move as you jump to jump forward, which takes a bit of time to get used to. The game in itself is very addtictive. It's almost like Pac-Man.The game gets fairly difficult along the way. I can get to phase 15 with-out trying. But then the increased speed of the enemies being launched on me throws me off at some points and kills me.

Overall, I give this game a 9.4/10      It's simple game play makes it what it is. It's a classical game that is best played with a friend, even if you don't plan on working together. The lack of music in-game gives it a some-what Atari-like charm. I wonder what this game would be like on an Atari 2600.....Well, not much different, I suppose, save for even simpler graphics. It was like a bench mark for the Mario series, many things in this game were used in future games. The fire balls became the Fire Flower, the POW block became, erm, the POW block, and the different colours of the Koopas (sorry, turtles...), became their own speices. I don't know where the para-koopas came from, but enemies with wings are a win for me. Mario seemed to keep the Plumber career after his game for future games to come. It's hard to believe he used to be a simple carpente over 25 years ago....
Graphics 7   Sound 8   Addictive 10   Depth 7   Story 3   Difficulty 7

Mario and Luigi, the best plumbers in the world, have a real job on their hands. A host of characters have taken over the sewers, and the brothers must clear them out of the pipes.The platform puzzle which first introduced Luigi to the world has both single and multiplayer action with two differing game types, but with the same objective.
Crabs, turtles and fighter flies must be cleared out by jumping underneath the platform they sit on, then kicking them away. Each level is cleared when a set number of coins is collected.For the two player mode, the first to collect the set amount of coins wins.

Users who own Mario Bros