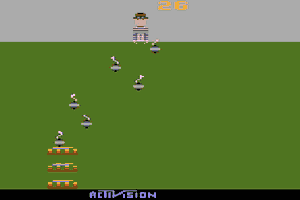 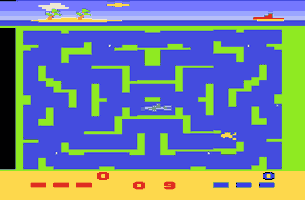 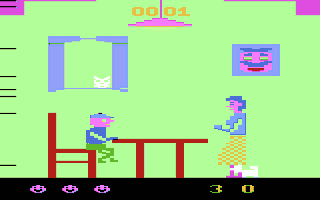 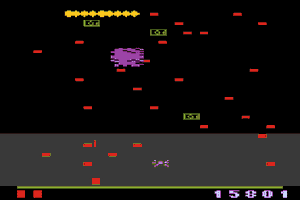 Millipede
Mr. Do! (pal)
Name This Game
Off Your Rocker

His world is filled with gigantic mazes and nasty bullies. He eats more, runs more, and plays harder than Pac-Man and Ms. Pac-Man combined! Junior is impish, incorrigible, and independent. Come race with him in his amazing playground. With Jr. Pac-Man, it's a whole new game!

Considering there were 100s of Pac-Man games made by various different companies at this game's time I thought I might review another Pac-Man game and compare & contrast them. I'm going to be reviewing Jr. Pac-Man. I have chosen to review this game because I previously reviewed a different Pac-Man game, both same concepts but different. Different by standards.

Considering this is an Atari 2600 game, I'm not going to take other consoles and their games into consideration. There was a major improvement in this game's graphics than the previous version of Pac-Man that I reviewed. This game's graphics have been greatly enhanced and they are, in a sense more tolerable. The previous version of Pac-Man that I reviewed, its graphics were very elder and primitive. After playing this version of Pac-Man I can definitely see improvements. Improvement in every element of the game's graphics. The orange and blue color scheme had vanished, leaving a delicate neon blue color complimented by a masculine shade of black behind. This was indeed a lot more attractive and easy on the eye. I could focus more on the other qualities of the game because of this. Although the game is clearly made up of boring and less appealing 2 D shapes, I actually found this version of Pac-Man more inviting and more satisfactory than the other version. The shading used on the ghosts were a lot more pleasing and I could clearly identify the shading of the colors used, whereas in the other version of Pac-Man I couldn't really them out.  Having said all that, I do feel that in some areas of the game's graphics, I found it very primitive and dull. In some levels the poor brown colours that were used really took away from the overall appearance of the game. The ghosts flickered again in this game which I really didn't adore. They put a slight strain on my eyes when playing the game. I can't tell you definitively which game came first or last, but this game's graphics If this game did come after the other Pac-Man version that I previously reviewed then the creators and editors of this game really did themselves proud, particularly because the game was made years ago.

The sound in this game is very, very similar to the previous version of Pac-Man that I reviewed. The same faint chimes of bells and the irritating sound that PAC made when he munches down a snack or a power-up item. I really didn't 'naime' that sound. Naime is french for like. I used the french language to emphasize the dislike for that sounds, I don't like the french language all that much (too hard). The same constant bleep sound that triggers at the start of the game is also featured in this version, not good. However, there was actually A LOT of improvements on the sounds in this game. The faint sound was actually a lot more vivid and I could enjoy it more because of that. The sounds PAC made may have been slightly irritating but they were also improved and it sounded a lot more realistic and fresh in a way. The creators definitely worked on the sounds in this game I can tell. I'm really impressed.

Exactly the same here. If you put all the graphics and sounds aside and really understand the actual goal and intentions of this game, you will really understand how addictive this game actually is. It's an amazing game, I thoroughly enjoyed playing it. As I said before, it's one of those 'venerable classics' that everyone loves. You can't get enough of this game in my opinion. Pac-Man was the ultimate game growing up, that has to be said without any shadow of doubt. It's a remarkable game, even for an Atari Game. People tend to judge Atari games on the physicality of the game but not on the actual intentions and emotions of the game. I refer to this game in a personified way because it really did get to me. I thought it was such an awesome game. I'm really impressed. Although not many levels, the game is excellent in bringing excitement and thrill to the table! I'm impressed. This game deserves at least one play, if not tens of plays! I hope you try it.

I used the term N/A in this review because the game doesn't have a story so it's really not available. There really was no story featured in this game. However, there was a PLOT. A small story-line as such. I mentioned this in my previous review. - You are a small circular object in a very alien maze surrounded by hundreds of little snacks and power ups, trapped by vicious ghosts who want you dead. That's it. There's nothing more to the story. There's no introduction to how you got there and where you must go to succeed. But hey, that's not what you need when you're playing an Atari Game - you don't need a story. All you need is your hands and a screen to play the game on. I didn't need a story, I happy without one. A small introduction or a video of some sort would have been very beneficial but I'm not complaining.

Like I said in my previous review, there was no real depth to this game. It's pretty basic and straight-forward. "You are a small circular object in a very alien maze surrounded by hundreds of little snacks and power ups, trapped by vicious ghosts who want you dead." What you see in the game's videos and screenshots is really what's in-store for you in this game. You're in a maze, eating your way out to survival! That's actually amazing. I want to be PAC. There were level(s) in this game so it really contributed to the depth, and you could always restart or die to start again. The fun never really ends in Pac-Man! Not a very deep game as such but fun anyway.

This game isn't very challenging or difficult to defeat and clock. It's a really, really basic game. But, it is very fun. There may be times when it gets difficult though. When you're near the end and have nearly eaten all of the munchies, the ghosts speed up and begin to trap you. This is where you get a little moved and you have to step up your game slightly. Other than that, this game is straight-forward and is really aimed at 'jr.'. - Juniors, also known as children/minors. You can retry as many times as you want which makes the game easier. Overall, easy game.

Overall, I think this is a wonderful game. It's a really fun-filled, mouth-dropping game, <- Literally, because Pac is actually eating food. Not funny? Okay, I tried! I think this game shows a brilliant appearance, it's very touching and moving in a way that you want to play it even though it's not very advanced or 'new'. I would recommend this game to ANYONE. Go on, give it a go!

Thanks for reading! Enjoy the game.

In this version, you play as Pac Jr. The gameplay is very similar to other Pac-Man games, with the exception of new extended level layouts, items, and cut-scenes.

To skip the musical intros on any level, press the button on the joystick.

Users who own Jr. Pac-Man