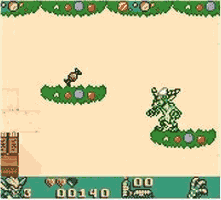 Metal Gear Solid Review by: supersonic44 - 7/10
Metal Gear Solid GBC: Meh
The metal gear solid series is easily my favorite game series.  Everything just clicks in a way that it almost shouldn't.  The story=brilliant.  The voice acting=brilliant.  The Gameplay= brilliant.  Basically, every game in the MGS series in amazing.  For those of you who care, my order from greatest to least in my favorite metal gear solid games are 4,2,1,3, (I still love them all.)  What I think makes metal gear great is the fact that, even though it's a war game and you kill people, Hideo Kojima still finds a way to make you feel sorry for killing people.  WHO DOES THAT?  Anyway, Im getting off topic.  We're all here to talk about Metal Gear Solid for the game boy color.  And, for a video game, it's not bad.  But, for a metal gear game, it's not really needed.

Story:
First mistake this game made, changing the story.  A metal gear prototype was stolen by a rouge group in Africa.  The group plans to use the robot to win an ongoing civil war.  You play as Solid Snake, and your mission is to infiltrate the robot and destroy it.  While the story is good, it isn't needed.  If your new to the metal gear universe, you need to know that the story is a crucial part to many peoples enjoyment of this game.  The main games twists and turns with the story keep you playing and get you hooked to the story.  The problem with this games story is that it isn't needed.  The main series isn't affected by it.  You could say, "This is the GBC, you can't deliver an epic game on the GBC."  True.  But, why put in on the GBC then?  Again, its a good story, but it isn't needed in the main series.  6/10.

Presentation:
the graphics are beautiful in this game, especially for a handheld.  What this game squeezes out of the GBC is pretty impressive.  The sound is also really good.  Remixed 8-bit tracks from the first Metal Gear Solid are welcomed here, as they are done very well.  My only gripe with the sound is they really didn't add more tracks, because they are needed in this game.  But still, this game is technically impressive for the GBC.  8/10 for graphics and 7/10 for sound, making a 7.5 for presentation.

Gameplay:
If you never played a Metal gear game before, (SHAME ON YOU!!!!!,) the whole point of the game is the sneak into enemy bases and destroy bases or enemy forces without being spotted.  Because if you are spotted, you will not live long.  You are not given weapons, they are found on-site.  You are not given health powerups, they are found on-site.  Basically, you have to infiltrate enemy bases with your own ingenuity.  This game does what it can, and for the GBC, it's pretty good.  However, there really isn't any replayability.  6/10.

Overall:
While this game is fun, it's not necessary.  They should've worked with this one more and put it on a console, because the story really isn't necessary.  That's fine for any other game, but for a Metal gear game, it's not acceptable.  I'll still give it a low 7.  You can play it, but you don't have to if you're a hard-core MG fan.
Graphics 8   Sound 7   Addictive 6   Depth 7   Story 6   Difficulty 4

Metal Gear Solid is a Modern Action Adventure game, developed and published by Konami, which was released in 2000.

This opens up after you beat the game the first time. Here you can challenge three new missions for each level of the game and you can find out more about the game's story.

When you get caught by a soldier inside a building or car, get out of the place and go back in. Keep on doing this and the enemies dissapear, causing your alert mode and evasion mode status to clear. You can also do this by entering and exiting a door.

Complete all of the VR missions in both practice and time attack mode to access sound mode.

Users who own Metal Gear Solid