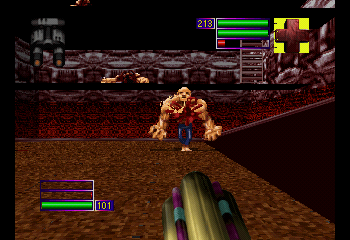 Perfect Dark Review by: thenumberone - 9/10
Perfect dark (N64)
So, this is actualy my 2nd review of this game, I made one last year, twas a thing of beauty with descriptions about weapons and everything, then i hit submit and got a vizzed error, wiping my entire review =(
Il copy it this time in case something happens =p
Perfect dark, i was sadly ignorant of until i stumbled upon it on vizzed, but what a find. Even having played moderngames i was amased at how well this one stood up, but you almost expect that from n64, a truely great console.
In the game you are an agent of the carington institute, youre essentialy a female james bond, following up on leads to uncover a very...interesting scenario.
The game wasnt overly lavish on the hints so i never realised certain things until well into the game. weapons you pick up, from pistols to rocket launchers are all unlocked for training in the carington institute ( your hq).
Each individual weapon has 3 timed challenges whereby you have to either destroy so many targets in a set time or get a certain number of points while maintaining a certain accuracy percentage.
It limits your ammo too, and some of these are exceptioaly difficult to do but well worth the effort, for every challenge level completed you get an accuracy and damage increase, making missions FAR easier.
You can also unlock cheats like start with a rocket launcher or a partner etc, by completing set goals like complete said level on perfect agent (hardest difficulty) or complete in say, 15 minutes.
If youre in game and think, id like to play a harder difficulty but i dont want to lose what iv unlocked, that too, is not a problem. From the carington institute you can scroll through missions, and choose the difficulty ( but if you want to do a harder one you have to play the missions consecutively). I started on easiest, and then went back to do it on perfect dark.
As well as unlocking things for doing that, the harder the difficulty, the more objectives there are, the easy difficulties essentialy cut half the mission so uping the difficulty after, really expands the gameplay.
The great thing about the game is all the extra things you do mean completing the game is only half the battle. I got a bonus mission after and unlocked another one, started doing the harder difficulties, upgrading my remaining weapons via training, and unlocking the cheats.
On top of that it has multiplayer style modes that can happily run npc's, giving you yet more to do.
It has to be the longest lasting n64 game, or retro game even, that iv ever played. Iv not finished everything yet either.
But, everything has its weak points and perfect dark is no exception.
So what could be wrong?
Well honestly... The plot is stupid.
Yeh, i said it, i wont go into details because i wouldnt want to ruin (despite my feeling you cant break what is already broken) the story for those that havent played but, really?
It starts great, conspiracy, men in the shadow yada yada. But frankly, the speculation was better than the truth.
Still, the gameplay just feels right, and everything seems to flow, so its a setback, nothing more.
The next point is a little more serious, however i think its more to do with problems emulating it than flaws with the game itself so its exempted from my judgement of the game.
The camspy, the floating camera, ( yeh you get some cool toys) is needed in the 2nd mission. A simple youtube search shows what it should look like, a kind of night vision mode. What you get however, is a fairely unhelpfull black screen. Given that the room you use it in is radioactive, you have to release the camera outside and navigate it blind. With a bit of trial and error, and a healthy dose of luck, you can eventualy get the photo you need. I can only be glad that you rarely need to use the thing.

So then, lets wrap this up.

Graphics-10
Iv got to be honest, bearing in mind when this was made, i have no problems with the graphics, its clear and consistant, im impressed that they managed it if im honest.
The one thing i could pull at is the design of the... Final enemys, and oh could i pull at that, but thats not bad implementation, thats dumb design.
Also, the way enemys die could be considered stupid, but i found it hilarious so i hold no grudge.

Sound-9
Really, its not half bad, i mean some tracks suck but its not the same thing recycled over and over again, the soundtracks fit well, theyre nice inthemselves, and generaly add to the atmosphere.
The character audio is less than perfect, stoping it getting a 10 but its not bad. Equally the death sounds are stupid, some of them could publish there last words as a book on the way to the floor...

Addictiveness-10
Make no mistake, this is addicting. As i said, completing the campaign is only half of the game. The makers put so much extra stuff in that you can expect to triple youre playtime if you do it all, at the very least.

Ah, what a letdown... It was all going so well and then, boom!
But, it was still fun to start with, and ok as it drew to an end.

Depth-10
Iv covered it multiple times so i wont keep on about it, il just conclude that it has a huge amount to do and many hours of play quality.

Difficulty-5
Dont be misled by that, the reason i give it 5 is you have difficulty settings, at its easiest it'd be about 2, at its hardest 9.
But if you do the weapon training it can be as low as 1 and as high as 7, i cant overstate what a difference that makes.

Overall-9
It was close, so close to a 10. It was simply let down at points, such as audio. Honestly, if that had been that, i probably still would have given it a ten, I just felt the plot just hit the ground at a certain point. The sheer skill in creating everything else, the weapons, the aim, the reactions, the audio, the extra unlocks and the objectives to achieve them all make this a truely great game, anyone who dosent play it will be left in the dark. I award it a close to perfect 9, and its well earned.
Graphics 10   Sound 9   Addictive 10   Depth 10   Story 5   Difficulty 5

Joanna Dark is an agent for the Carrington Institute, a secret organization funded by anonymous sources and dedicated to protecting the world. Through their highly trained operatives and special devices (gadgets), Carrington keeps an eye on terrorists, world powers, and strange happenings. The speed in which the dataDyne corporation has established itself through the development of new technologies is starting to worry the institute. So when Carrington receives a message from Dr. Caroll, a scientist wishing to escape dataDyne, they send their best agent, Joanna, to infiltrate the company headquarters...

Perfect Dark is a first person game similar to Rare's earlier Goldeneye: 007 though with more of an emphasis on stealth. Joanna can pick up and use a variety of firearms. In addition she carries quite a few spy gadgets such as IR scanners, night vision, probes, and a deadly laptop.

Users who own Perfect Dark