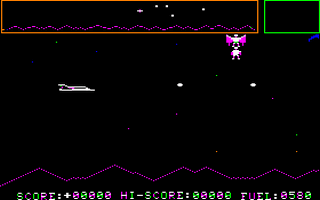 Home Alone Review by: rcarter2 - 3.5/10
Just watch the movie.........
Ohhh, Home Alone. How we laughed when we saw 2 grown men getting mutilated by the traps of a little kid. You were a descent movie, but a crappy game. If you have seen the move that was made close to 20 years ago, you know the basic gist of this game. Remembering the ingenious traps that young Kevin sets up in his house to defend himself from two bandits would make you think that doing the same thing in a game would be entertaining. I'm going to be honest with you. Home Alone for the NES falls VERY short.

Graphics: 4
The NES isn't known for super amazing graphics. But when this game came out, we were at LEAST accustomed to shadows and a background that at least looks like it is on a different plane than the game sprites. But I guess they must have been working with a $10 budget for the background. Your character, Kevin, and the two enemies, Marv and Harry, don't look all that bad. But the house has absolutely no depth and looks like it was drawn by an 8 year old. And even though the characters look fine, their movements are ridiculous. Kevin walking looks like he is either pretending to be a train engine or he is an extra in West Side Story. And if you thought the traps will work remotely like the movie, you are out of luck. You pick up little squares that have crappy pictures, and you place them anywhere you want. Them getting hit is just them falling on the squares for a few seconds. I guess at least they throw in some stars.

Sound: 2
Why does the sound department get such a bad rating? There is no sound effects! You heard me. No sound effects at all. You would assume that you would at least get some sort of "boom" or "bang" when the bandits hit a trap. But no. The only thing you are going to hear throughout this whole game is the annoying music that the developers have so 'kindly' provided for you. Not really. There are no levels, so you are stuck listening to the same music over and over and over and over.............

Addictiveness: 3
Honestly, there is very little addicting aspect to this game. Let me break this down for you. As I said, there are no levels. This game has one objective. Don't get caught for 20 minutes. And I'm not talking about 20 minutes in video game time where time goes super fast. You have to last for 20 minutes of doing nothing but avoiding getting caught. You get traps that you can grab and set down to slow down the two bandits. You get caught once, it is game over. There are no lives, so if you get caught with 5 seconds left to survive, too bad, so sad. There is one thing that can make this game slightly addicting. Get a group of friends together and make a competition to see who can last the longest without getting caught. Trust me, I doubt anyone will be lasting the whole 20 minutes soon.

Story: 2
If you knew the story of this game, then the rating would probably be higher. This game follows the main point of the trap portion of the movie, but there is a problem. The game doesn't give you ANYTHING that tells a story, even when you let the title screen go for a while. The only way you will really know what the heck is going on in this game, you have to have seen the movie or at least know what the point of the movie is. Otherwise, all you can come up with on your own is that you are a little blond boy being chased around by two pedophiles.

Depth: 2
By reading everything prior to this, you expected this rating. There is very little to do in this game. You just run around for 20 minutes eluding the two bandits. To slow them down, you just grab little squares that are supposed to be traps and place them down so the bandits walk on them, making them fall down for about 3-5 seconds. That is it. If the traps had some animation, or the point was to damage the bandits enough to put them out for good, that would be better. But no. You have to do the same thing over and over for 20 minutes strait. You get caught, you get a Christmas looking screen with the words "Oh no!". You last the whole 20 minutes, and........not to spoil the ending, but it is not really any better than the screen you get when you lose.

Difficulty: 8
There is one good aspect of this game, it is that it will give you a good challenge. This game is very hard to last for 20 minutes. For me, challenging is almost always good. It isn't challenging due to glitching or bad controls. It is just challenging the farther you get through, because your traps start running low. The thing is, the difficulty of this game also makes seeing such a crappy ending less worth it.

Overall: 3.5
If you haven't played this game yet, you are not missing out. If there is any reason I could give you to play this game, it would be so you can try to beat it without save states so you can have the bragging rights of being able to do so. Otherwise, you can leave it, or play it once just to see its low quality graphics and no sound effects accompanied by repetitive music. You won't have any story, and you have little to do, but it will certainly give you one hell of a challenge. Just one very repetitive playing challenge. But I still suggest that you just watch the movie instead.
Graphics 4   Sound 2   Addictive 3   Depth 2   Story 2   Difficulty 8

Based on the film of the same name. Kevin McAllister has been left home alone for Christmas while his family is on vacation. This wouldn't be so bad except for two burglars, Harry and Marv, aka the Wet Bandits have decided to burglarize his house. But Kevin's too smart for that and will use the items he has available to make traps for the burglars.Home Alone is a side scroller. Controlling Kevin, the player must wander around Kevin's house picking up icons representing different kinds of traps. He then drops these icons onto the ground, in the path of one of the burglars, stunning them and earning a score. Once stunned, Kevin can walk past them and continue collecting trap icons.

MOVIE IS THE BEST

Users who own Home Alone