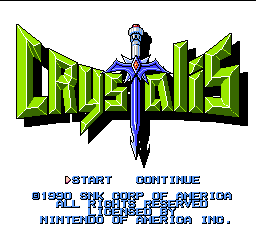 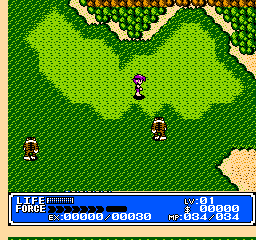 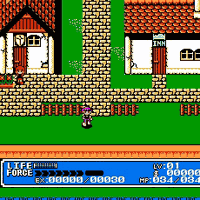 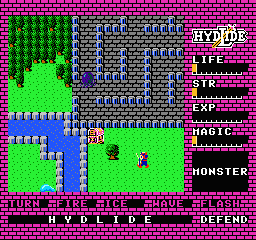 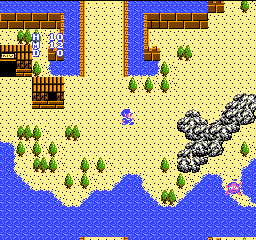 When the Great War engulfed the world, bringing civilization as we know it to an end, it ushered in a new era of sorcery and magic. The magicians used their magic to keep order, and peace reigned for a hundred years... Until an evil magician named Draygon, seeking to control and dominate his fellow men, began to use his powers for destruction and conquest. To combat Draygon's evil, the other magicians constructed four powerful swords of wind, fire, water and thunder. Used together, the swords would transform into the mightiest weapon ever created: the sword Crystalis. But Draygon seized the weapons and scattered them far and wide throughout the land. Only one hope remained: A young lad, himself a great magician, who had been imprisoned in a cave and frozen during the Great War. Though they knew it might destroy them, the wise magicians pooled all of their powers in an attempt to revive him. When the boy awoke - his mind a blank, even his name forgotten - they had vanished, leaving him to find his destiny in this strange new world. In CRYSTALIS, you play the role of the young magician, making your way through Draygon's hostile land in an effort to locate the weapons you will need to defeat him. Draygon's monsters and black magic will threaten you at every turn, but you must not falter - only you can deliver the world from his scourge of evil!

Crystalis Review by: Jordanv78 - 9.8/10
One of the best adventure/RPG games on the NES
The End Day comes and goes; humanity is devastated. Bizarre mutations spring up from all corners of the world, bent on the destruction of all things good. The dark warlord Draygon has taken control of an empire, the soul of which is an airborne tower that contains the very might of evil itself.

Although Draygon's might truly has pervaded the world, a new foe stands in his way. Awakened from a cryogenic slumber, a hero in purple armor steps out of a cave and into the peaceful town of Leaf. Although dazed and stricken with a loss of memory, the young lad walks to the village elder and all that is known comes to our attention. The wise man then gives to our warrior the Sword of Wind. His journey has just begun. It is now up to the player to decide whether the anonymous assault machine will succeed in his quest to unify the Sword of the Elements into the mighty blade Crystalis, defeat Draygon, and lead the world into a time of peace.

Noticeable when you begin the game is that you're walking far faster than the game that this one is compared to frequently: The Legend Of Zelda. Merely touching an NPC saves you the inconvenience of actually having to push a button - they immediately begin blithering on in a blue box reminiscent of Final Fantasy. This sort of speed is what sets this game apart from Zelda... instead of a slow, casual jog throughout Hyrule, the pale-skinned psychic sorcerer of Crystalis charges quickly into his enemies, preparing for a high-paced battle. Why walk ever-so-slowly to a potion shop when you can run to the next city?

In fact, compared to a round of Legend Of Zelda, the pace of Crystalis seems outright feverish. Sword, shield, agility, and magic are all brought forth in a blitz, and the enemies don't wait for you. If you're getting triple-teamed by enemies on the overworld, you'd better have your wits and reflexes about you, unless you like being smashed into a small pile of armor and human parts. Dexterous moves are the order of the day, and the controls superbly respond to everything you do with all the accuracy of a finely-cut diamond. An increase in level can come at unexpected times, providing you with much-needed HP and MP to pull you out of the most peanut-butter-sticky situations. Fortunately for you, if you do get obliterated, you can continue from remarkably close to where you last where, although, as with most battery-backed adventures, I recommend you save as often as it comes to your mind to save.

Fortunately, you engage the blobs and wolves of the world with more than just your sword. You can buy shields and armor to increase your defensive abilities. Also, balls and bracelets power up your blade to amazing abilities. You can hold the attack button to charge your sword to level 1, 2, or 3, depending on whether you have the power-up items for that sword. At level 1 you fire a simple forward blast that does slightly more damage than a taste of pure steel. The second level is a wall-cracking orb of pure elemental energy blasting off from your trusted saber and passing through enemies with much pain and screaming. At the final level, your sword consumes your MP and executes an amazing elemental energy explosion, eliminating enemies and diminishing Draygon's dignitaries.

Although ''Magic'' is the term used by this game, ''Psychic Abilities'' would probably be a better description for the powers that are in your possession. You have the talent to communicate via telepathy with the wisest people in the world; to teleport to the entrance to any town at your whim; to heal your body through pure concentration; to send the minds of men and mutants alike into such disarray that they are temporarily unable to move; to focus your energy to make your body as invincible as a rock; and to levitate over the ground in an amazing feat of telekinesis.

Items exist primarily to either further the game's plotline or to recover some aspect of the player's life. Among the recovery items: an Antidote speeds poison out of your body, a Fruit Of Power or a Magic Ring recovers your MP, a Lysis Plant restores the feeling in your limbs, a Medical Herb heals physical wounds, and a Fruit of Repun cures the questionably-named status ailment ''Nuper,'' which is Bizarro-speak for ''I've been turned into a blob of goo.''

As the plotline progresses, it's obvious that this game is serious. The storyline is often dark and rife with plot twists - compared to the titles of its era, Crystalis is a cerebral masterpiece. People die. Villages are destroyed. Bad things happen to good people. And you can't stop any of it from happening. From the saga of the Four Wise Men to the tale of your female compatriot, Mesia, the chronicle of Crystalis leaves you wondering just what will happen next. And just when you think you may be making some headway against Draygon's empire, he introduces the Finest Four - the most elite warriors ever to grace his kingdom. If your first few battles were getting you cocky, soon your feathers will be plucked by Kelbesque. The rest of the Four are just as difficult and you will need to plan new strategies just to take each one down, not to mention gather up ridiculous amounts of experience points.

From the first time you step out of the cave in front of Leaf to the anticlimactic final battle, the game will stun you with lush, detailed backgrounds and astounding special effects. I found all of the Level 3 sword attacks to be incredibly beautiful, and the same goes for the special attacks that some of the bosses possess. The elements are handled in such a way that they appear realistic and powerful, a balance often lost on many game designers. Bosses intimidate you, as they should, striking naturally and never appearing still. Your character has all the appearance of a virtuous young lad who, deep in his heart, knows that despite an overwhelming amount of violet coloring slapped on him, he must deliver the world from the great evil that has overtaken it.

Melodies drift from the world as you run towards your goal. The least powerful of the compositions can be said to be nothing worse than forgettable, and the strongest stick with you and bounce in your mind even after you've laid down the sword for the last time. Tunes match the backgrounds and always set an atmosphere. The sound effects, although appropriate to their settings as well, are uninspired, the lightning sounding weak and the sword humming a generic ''whssh!''

It's hard for me to find a down side to this game. My biggest annoyance was that sometimes it is possible to engage a boss without a high enough level. This makes it fully impossible to damage them. However, this irritation can be easily avoided by seeing to it that your level is high enough before trudging into the dungeons. The difficulty isn't so great that any decent gamer would have too much trouble with it, although I can't guarantee that the game won't send you off looking for an walkthrough at some tricky steps. Nonetheless, most of the puzzles can be solved with common sense, and it always feels better to work games out on your own.

The bottom line is that this game is basically like The Legend Of Zelda, but faster, deeper, more involved, less immensely overrated, and ultimately, more fun. For someone who didn't even like Zelda to give this game a perfect score really ought to say a lot about the mystical allure of the vast adventures contained within a Crystalis cartridge. I heartily recommend that anyone happens upon this game for sale purchase it at once. If it disappoints you, you can burn down my house or something. Have fun!
Graphics 9   Sound 9   Addictive 9   Depth 9   Story 9   Difficulty 8

October 1st, 1997 is known as END DAY. A great war encircles the globe and brings about an end to civilization. The surviving humans concluded that they could never repeat their mistakes and build a great tower in the sky to watch over the world and act accordingly to combat "evil". One hundred years have passed since then and a hidden cryogenic chamber in the mountains springs to life...Crystalis is a top-down action RPG. Starting from the cryogenic chamber, the player takes the role of a mysterious hero who must uncover the mystery of the tower. The character may equip weapons, armor, shields and globe/bracelets on his body and a single item from his inventory for use in the field. To aid in the hero's goal. he will meet up with the four wise people and learn their magic, while also obtaining the four elemental swords which will help him progress. Players gain experience and gold from defeating monsters. The experience is used to gain levels and improve statistics, however a minimum level is required before one can do damage to specific bosses. Gold is used to purchase items in shops.

To pause the game, press B on the second controller.

Users who own Crystalis