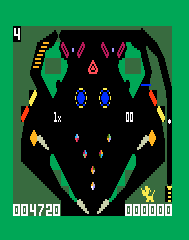 Pokemon Pinball - Ruby & Sapphire Review by: mlb789 - 8.8/10
Pokemon Pinball-Ruby and Sapphire
Pokémon Pinball-Ruby and Sapphire is one of the Pokémon Company's different ways to put Pokémon on the market and actually have a different game play type.  Whether it be the Mystery Dungeon series or the Pokémon Ranger series, there is always a different way to play Pokémon.  This is one of those games, and like the others, you will get hooked as you play.  Pokémon Pinball-Ruby and Sapphire creatively combines the fun of playing pinball with the challenge of catching all of the Hoenn Region Pokémon.  The main objective is of course, to catch all of the Hoenn Pokémon (around 200) to complete your pokedex.  There are two main maps you can use in the game, one is Ruby, and the other is Sapphire.  The two do NOT have different routes, gym battles, and etc. But there are bonus levels provided that keep the game from getting a little boring.  The two main maps contain: A water Pokémon to start the catch sequence, an egg holder, a Pokémon Mart, a travel station, and an evolution sequence.  I should state that each map you play on has different Pokémon.  For example, if you start on the Volcano map you can get a Torchic, but on the forest map you can catch a duskull.  Each time you either catch a Pokémon or evolve a Pokémon, in the middle of the machine you get a Pokeball.  You need three Pokeballs to start the first bonus stage, Kecleon or Dusclops, and another three to get to the next stage, which corresponds to the version you are playing.  There is also a bonus Wailern mini game, and you have the opportunity to catch Jirachi and Rayquaza.

Graphics: 8  The graphics of this game are like those of Pokémon Ruby and Sapphire, so the graphics are not that bad, but they are not the best either.  Expect a slightly grainy game play experience, but the graphics will not get in the way of enjoying this game.
Sound: 8  Each stage in this game, whether it be the main stages, Kecleon or Dusclops stage, or the legendary stages, have different or slightly different music.  The sound quality is actually quite good, and some of the songs actually make you believe you are in the game

Addictiveness: 8 The game is not quite as addictive as the regular Pokémon series, restarting the game after you beat it does not have the same thrill as restarting a Pokémon game, but as long as you don't beat the game, you will not grow tired of it at all.  The game is almost impossible to put down, unless you get really mad at missing catching Kyogre or Groudon by just a second, or you lost all of your lives right before the boss stage.

Story: 4 The story of this game is almost non-existent, because you can't travel around meeting other people and doing slight missions, you can't beat gym leaders, and you can't BATTLE at all, which is the most fun part of the Pokémon games in my opinion.  The reason the game has a story is because you can catch all 200 Pokémon, which is technically a storyline for you to follow.

Depth: 10 The game, even though it ends at one point, provides enough play for a very long time.  The game also has certain ways to get each Pokémon, and finding them out is all the more fun.

Difficulty: 7  The game is difficult, but not too difficult as it is possible to actually beat the game.  It takes a long time to get to all of the Pokémon, so it is difficult, but it isn't an impossible game like Battletoads.

Overall: 8.8 Pokémon Pinball-Ruby and Sapphire is a very fun game I would recommend to anyone who likes Pokémon, as it has the main element of catching all of the Pokémon you can.  The game is not unlike Pokémon, but it has a certain twist unlike the other games.