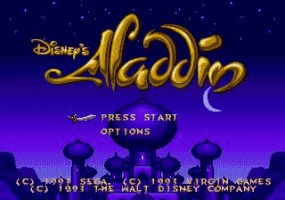 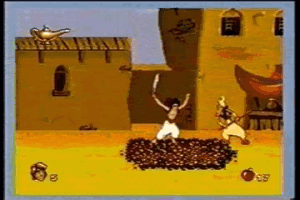 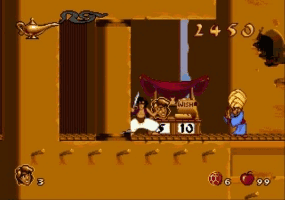 Back when the movie was released in the 1990s, Aladdin was also released on the two main 16-bit consoles. Despite the attributed limitations to the Sega Genesis, Disney’s Aladdin was technically superior to its Super Nintendo version, although that latter version was more faithful to the movie.

The graphics in this game are really astounding for Sega Genesis.

They are nice and colorful and are far superior to their SNES version. For starters, Aladdin himself his closer to his movie alter ego by being tall and nicely drawn – the SNES one was rather short, although Abu was always close to him. He is less Prince of Persia-like by lacking the SNES acrobatic abilities, but he carries a scimitar and the swing is perfect. This makes progressing in the game much easier to my taste. Also, his swing varies depending where he stands (if he hangs on a rope, for example) or where he looks – pressing the up arrow and swinging makes him look like he tries to chop off ivy blocking his way. Finally, all his movements are fluid and life-like – he can throw apples at an amazing speed – from running to jumping to climbing ropes. You actually see the realistic movement of the arms and legs, something not done until Final Fantasy VIII for RPGs. And his “suffering” doesn’t make him jump back as in the SNES version, which can be practical when close to bottomless pits.

The levels are also nice and colorful, albeit smaller in size than the SNES version and with less details in the background – you don’t see the Sultan’s Palace. The graphics have logical perspective by letting you sometimes go down stairs and behind a wall and sometimes even go beyond the regular path (like in the second level). Although the colors show the Genesis pallet limitations, they are nonetheless well-adapted to the level. While in the streets of Agrabah (levels 1 and 3), you can see the houses around you, the desert level has a lot of sand and landing from high up creates some dust, the dungeon and Cave of Wonders levels are dark enough to reflect the “undergroundness” of the level and the Genie’s Lamp level is as colorful as the character. The Sultan’s Palace is a colorful and luxurious level, while the final level where you fight Jafar has a fiery red background of evil that reflects the vizier’s character.

Finally, the foes you face are also well-drawn and better so than their SNES version. First, when you kill them they die quicker. They also come in various shapes and abilities; the knife thrower will cut your apples while the fat guy will see his pants drop if you throw an apple. There is also the regular guard who swings his scimitar and you and a snake crawling around with his fez and sunglasses. Finally, the few bosses you come across (the thief, the Captain of the Guards, Iago, Jafar) all have different strengths and weaknesses and are also well-drawn (although Iago merely runs on that wheel thing to create ghosts so you don’t see much of him). However, Jafar had “more to offer” on the SNES, be it in his magician or giant snake form.

The only thing the SNES version had better than the Genesis version was the “cinematics”. In the Cave of Wonders, you see Abu taking the forbidden treasure and Carpet trying to stop him (rather than just see his picture); and after killing Jafar, you relive what happened in the movie, from his imprisonment in his lamp to the freeing of Genie.

Wow! I’m still amazed at how the game’s creators were able to adapt the movie’s soundtrack so well.

Tracks like Prince Ali (level 1), One Jump Ahead (level 3), Arabian Nights (level 4), Friend Like Me and A Whole New World were wonderfully remastered for Genesis. I even have to confess that, except for Friend Like Me, I kind of prefer the Genesis version to the original one.

Original tracks like Camel Jazz and Turban Jazz do have a jazzy beat to them, although the former one is livelier with its “desert-like” orchestration – you know, a kind of Persian bagpipe. Gloomy Tune (inside the Cave of Wonders) is the strangest track of all, with a mix of “desert music” that sounds out-of-place and more mysterious sounds that are more appropriate. Finally, Arab Rock (when escaping the Cave of Wonders and in the last level) sound appropriately dramatic – although I would have preferred a more dramatic track for the last level – and Rug Ride sounds dramatic enough to maybe have you blood pressure rise a little.

Sound effects are also good, but if you don’t care for them you can turn them off while keeping the music on. They are life-like – you can hear the fracas from the jars people throw out their windows – and even have some (would-be) voices like the ordinary guard taunting you with his “Come on!” and the enemies showing their suffering when you throw apples at them. The scimitar swing is well-done, and so is the metal hitting when you deflect the knife thrower’s attacks. The exploding skeleton in the dungeon sound genuine (you can even hear his bones bouncing everywhere), as is the case with the “magical sounds” (like the ropes in level 3 or when you collect a Genie token). Finally, there are some goofier sounds like Abu jumping on a man’s belly in level 2, the pink flamingos in the Sultan’s Palace and the klaxon sounds when bouncing inside the Genie’s Lamp. That level also features realistic balloons popping.

Thanks to the previous two parameters, I just loved the game. Some days, I would just go in the sound test and listen to the tracks because they are that good.

But what hooked me was the invincibility cheat code. As I’ve said in the past, I’m more of an RPG guy and games like Aladdin can be tedious to go through which was the case. The Cave of Wonders and the fight against Jafar were extremely difficult, but thanks to the code I was able to get through without a scratch.

But before I discovered the codes I was still able to enjoy the game up to the Escape from the Cave of Wonders.

This is where the Genesis version starts lagging behind the SNES version.

While yes, you revisit the highlights of Aladdin’s adventure, you do it less faithfully so. On the SNES you do walk in the streets of Agrabah and explore the Cave of Wonders, but you also see Jasmine and fly with her in the sky (a good level to grab some bonus items). In the Cave of Wonders, you see Abu grabbing the jewel that triggers the implosion of the cave. Finally you also see some dialogues at the end of the levels and your carpet ride has much more action – you see the lava “tidal wave” and have to make your way through a maze.

In the Genesis version, you do see some dialogues at the end of some levels but they are not cinematic-like compared to the SNES. Also, there are huge gaps between escaping the Genie’s Lamp and the Sultan’s Palace where Iago steals the lamp. That could have been improved.

In addition to being less faithful to the movie storyline, Aladdin for the Genesis has less depth than the SNES version.

In the latter, there are three zones for each levels, all of which have a fair amount to explore (including getting all those red gems). In the Genesis version it’s pretty straightforward: you simply walk left and right to reach the end of the level and (when there is one) fight a boss. Other than Genie tokens and the occasional one-ups (which are well-hidden usually), there isn’t much to see in the levels.

Despite a lack of depth, Aladdin still has plenty to challenge you.

Killing enemies/avoiding their fall offs (like the exploding skeleton) is quite a challenge at times. Since you can’t bounce on them like in the SNES version, you can only use your scimitar and apples. With the other obstacles around you (people throwing clay pots out of their windows, hot peppers on the ground, spikes, ball and chains, etc.) you will need to stay on your guards constantly. So you will appreciate the Jafar lamps you sometimes find that will destroy any enemy in sight.

The difficulty is especially challenging in the Escape from the Cave of Wonders. There are lava pits everywhere and giant rocks rolling at you. With a very uneven surface and other obstacles to avoid, you will likely get hit often and therefore die.

Finally, the last level seems to have an unusual quantity of fiery floors, making your progress and you fight against Jafar nearly impossible. Add to that his snake staff throwing magic at you and you have a nearly-impossible final boss.

But nevertheless, I strongly recommend Disney’s Aladdin for Genesis. The graphics are more colorful and detailed than the Super Nintendo ones and the music sounds much better. But if you want more depth and a games closer to the movie (and a possibility to get passwords to save your progress), then opt for the SNES version.

Hang on to your carpet for ACTION and FUN! Aladdin slashes his shining scimitar to fight through Agrabah, escape the Sultan's dungeon, survive the fiery Cave of Wonders, snatch the Genie's Lamp and save Princess Jasmine from the evil Jafar! All-new technology creates animation so smooth, it's like watching a real animated film. Aladdin battles thieves and desert warriors, and barely dodges danger on his high-speed carpet. Survive Jafar's troops for a dash through special bonus rounds. Hilarious! Palace Guards drop their drawers and camels spit dirt wads. Aladdin ping-pongs like a pinball INSIDE the Genie's Lamp!

Users who own Aladdin