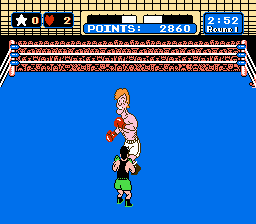 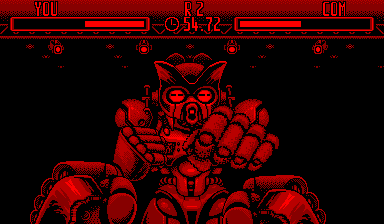 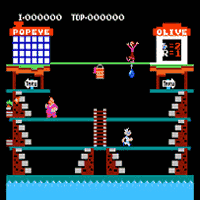 It's a right jab, a left hook, an uppercut - it's Mike Tyson's Punch-Out!! where you'll get the chance to compete against boxers from around the globe. Punch your way through 13 bouts in the minor, major and world circuits against tough contestants like Piston Honda, Glass Joe, Super Macho Man and many, many more. Defeat all your opponents and meet the ultimate challenge against the World Heavyweight Champion Mike Tyson in the greatest fight of all - The Dream Bout! Knockout Tyson and you can become WVBA (World Video Boxing Association) Champ.

Mike Tyson's Punch Out!! Review by: Zircron Swift - 9.5/10
Mike Tyson's Punch-Out!! Review
Mike Tyson's Punch-Out is regarded as one of the best NES games out there, and I'm not sure why. I have often stated before that sports games, especially the golf ones, are just the sports and don't offer anything interesting or new. Sometimes a sports game can capture the simulation of sports, but if that can happen, why not just go out and do it yourself? Regardless, amazingly high praise has been given to this game, and now I'm going to see what this game is all about. This game was first released as a Famicom, simply marked "Punch-Out!!", but it wasn't until Nintendo's founder, Minuoru Arakawa, went to a boxing match that featured Mike Tyson, who was yet to claim championships. He was so impressed with the boxers "Power and skill" that he was inspired to use Mike Tyson as a special guest in a port of "Punch-Out!!" to help with sales. And so Mike Tyson's Punch-Out!! was born. And then he went to jail, breaking the contract they made, and the ordinary Punch-Out!! was re-released. Personally right now, I don't see a difference. It's only a change in the final opponent. Why do people hate the re-release so much if they're both practically the same? This is what I'm going to find out.

The game starts out with an 8-bit sprite of Mike Tyson saying he awaits your challenge, and then the title screen comes up. Wait a bit, and some back story will show up. Apparently there is this little guy called "Little Mac", who wants to become the world champion in boxing. Doctor Louis, his black couch, is there to support him every step of the way. Basically your stereotypical American sports movies when a wimp wants to be the best, tries and fails, gets a couch, trains and have a montage, and after so much hard work and determination, he finally comes out victorious, only we just get straight to the building up the ranks part. Cliche to say the least. You start playing the game straight away, and who do you fight to start off your boxing career? The worst that is ranked, Glass Joe. This character has pretty much no strategy, so it's a good place to test out what each button does. There are two types of normal attacks, a normal punch (A and B for left and right) and a face punch (which requires you to hold down the up button + A or B). You can press down for a block, which reduced the damage dealt to you, or you can press left and right to sway out of each attack. If you have a star, you can quickly tab the Start button a few times to unleash an upper-cut special attack. Every attack missed or blocked and every hit you take takes away some of your stamina. When it reaches 0, you can only block and dodge, unable to attack. Make every attack count.

The music starts playing as you start the boxing match. This music was unlike anything I expected it to be. I just expected it to be a buzz of the crowd, that like many other sports games there would be near silence apart from the sound effects and would be an utter bore. But this game blows that all away out of proportion. It's incredible, amazing, and inspirational. Every match this plays, and every time it plays, I feel a sense of determination piquing, and a feeling that if I fail, a comeback will happen, and he will be defeated next time. It just manifests everything related to hard work and determination, and always builds up to a climax when you finally punch him in the face, he topples over and is finally KO'ed. It might be the same track every time, but by golly, it's the best music I've heard of in a sports game, because it's the only music I heard in a sports game. See, this is why you need to have good music in sports games, instead of silence. Music enhances the feel of the game and how you should be feeling in that moment. If you have silence, it's just a dull void of doing something on the screen. While the game play might be superb, without the music the feel of the game goes out of the window and makes it feel much less exciting. Mike Tyson's Punch-Out!! did that where others have failed. I can practically feel like if I play this long enough, I can face the mighty "Iron" Mike Tyson, and maybe even beat him. I can feel the build up and immense satisfaction of beating each and everyone of my opponents. I can only imagine what I will feel when I defeat Mike Tyson himself. All this, thanks to the music. Take a note, sports games, because this pointer is as fine as a well sharpened knife.

The graphics I also think are amazing. Sure, the mini peep-talk screens aren't very interesting, but everything else is rather well detailed, especially the training montage cut-scenes where you get the pass key. Not as well as the arcade version, but for an NES game, I think it did superbly. I love the shocking size comparisons when you fight the bigger guys. You are literally the size of their legs, it's frightening. Every boxer has their own personality, and they use that in their style of fighting. Every time you punch or kick them, their expressions are very detailed for an 8-bit game. You can see the pain on their faces, or the shock of being counter-attacked, but the best part is when you knock them out. They all fall to the ground a different way, they stagger, they fly to the ground, they flop down, they turn and try to gain balance, but fail, and even stumble back before fainting. The way they did this was so amazing. The movements are accurate and smooth, and it almost feels like that they are genuinely being knocked out as if they were real people, and not just sprites on the screen following a line of code to make them do an event caused by an action. There is so much variety in this game, so, so much it's hard to think it was made back in the 1980's.

Now, the game play is where it really shines for this game. It requires patience and skill to complete this game. You can't just mash buttons and expect to win easily, as that will run your stamina dry in seconds. It's far more beneficial in this game to be the defender than the offender, and that only adds to the satisfaction of out-witting your opponent, despite their infinity larger chest size, using tactic instead of brute strength to take down your opponent, showing agility instead of recklessness. That's something I admire in a game, a true need of skill to complete it. Of course as the game moves on, more and more opponents will have these features as well, making it more difficult. It's a game that requires timing and trial and error. It would be very hard to do it all the first time round. Also there are moments when an opponent seems too powerful, and you almost feel kinda hopeless when you can't even land a single hit on him. But then you work out his weak spots, attack before he lands a punch on you, his trunks go down and you can punch him in the gut! What a great feeling. Also, you'll fight opponents that have unique properties, such as the Tiger guy, who uses his magic to his advantage. Not sure if that's legal in a boxing match, but makes fora very interesting, and tricky, match.

Overall, I give this game a 9.5/10     This is the sports game. It has everything. Inspiring music, satisfying graphics and reactions, a compelling and interactive game play, a selection of opponents that are just full of character, a sense of intense difficulty that makes you honestly believe that if you try hard enough, you'll come out on top, and most importantly, a main goal you want to achieve. Most sports games have a goal, but it isn't put forward as much or as powerfully as this game does. You're off to fight "Iron" Mike Tyson, champion of the heavy weight champion of boxing in the world. The guys an inspiration to us all at times, and you're off to fight him yourself. That's what drives you. To be able to beat the best and then be the best. That's what the re-release got wrong. Dr. Dream. I don't want to fight this character that has little to no personality. I want to fight Mike Tyson. He might be a sprite on a screen, but at least he's real, and that does something when you defeat him. But Mr. Dream? That takes the whole aspect of the game and chucks it in a blender, mixes together bland and "meh", and then hitting frappé, then chugging it down the sink after realising what was just created. Yes, Mike Tyson's Punch-Out!! is an incredible game, absolutely superb in every manner. If you want a challenging game, then this one is no picnic. Just go for "Mike Tyson's Punch-Out!!" and not that other one...
Graphics 9   Sound 10   Addictive 10   Depth 9   Story 2   Difficulty 9

Users who own Mike Tyson's Punch Out!!

Comments for Mike Tyson's Punch Out!!