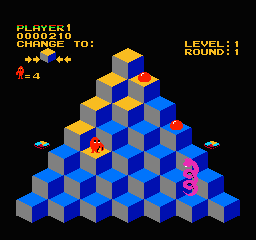 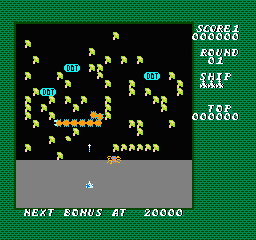 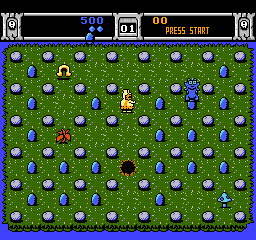 Graphics: 8
Okay, arcade games aren't really known for awesome high definition graphics, but I like the ones that this game has, they are colorful and simple which makes the game easy to enjoy and plus it is an arcade game so the graphics aren't meant to be super high quality. I like the sprites of this game's graphics and I think that everything about them is very clear and easy to understand and see. I think that they are very nice and colorful and they really fit the arcade look. I scored the graphics an 8 because for their time period and still even now the graphics look pretty good and I think they look decent for a game that came out almost 30 years ago with an 8 bit pixel screen.
Sound: 7
I like the sound in this game because it kind of puts you into gaming arcade mode and it really makes the game that much more interesting to play with good sound. The music that plays when you first enter is so classic and I really enjoy listening to it because it puts me in a gaming mood and I really do enjoy it. Some may think that the sound may get a little annoying because it always happens every single time you move and it may get boring but I think it is better than nothing because a game would be pretty boring if there were no sounds to it. The sounds are actually pretty good, there is a pumping sound when you pump up the enemy monster before they blow up which I think fits in really nicely. I scored the game's sound a 7 because it provides for a gaming environment and it gets you in the mood to want to play the game and it makes it more interesting.

Addictiveness: 6
I play this game a few times before giving up altogether because I find it so fun, I would always play it and I got a high score of 96,710 on a Nintendo game disc that had all of these namco games and I guess it is a different experience doing it on the computer which I think is funny because I couldn't get my score past 30,000 and I have gotten better scores on a joystick controller. These sort of games are meant to be addictive, for what they don't deliver in graphics, sound or storyline quality, they definitely make up for in addictiveness, because they are classic games with a simple objective which is setting a high score and winning. I think that if a game like these arcade ones in particular had a complex story behind them, it would take away from the actual game because they can be confusing or hard to follow and it really just makes the game more complicated then it needs to be and also less fun. So here is the basic objective of the game and it is simple, all you have to do in the game is eliminate all of the monsters that dwell underground, you can either do that by inflating them until they explode or you can dig a tunnel underneath a rock and then drop it on top of them. If you decide to drop a rock on them you get 1,000 points if it fell on 1 monster, 1,500 if it fell on 2, and 2,000 if it fell on 3 and so on. For every 2 rocks that you drop, which they don't have to successfully land on a monster, a special fruit or vegetable item appears in the center of the game where you start and you can get it and get points, the point values increase for each item when you get into the higher levels. There are 2 types of monsters in the game, there is a pooka which is a round red monster with goggles and it hops around to chase you, and there is a fygar which is a green dragon which can blow fire at you from a long range so be sure to watch out for those!I usually just dig a path under a rock and wait for them to come to get a lot of points, if there is one left over and there is a fruit or vegetable item in the middle, I would go for the item because chances are it is worth more than the monster that got away. Levels are indicated by the flowers that show up in the top right of the screen, white flowers signify 1 level and red ones, 10. I just find this game really fun to play because of how increasingly challenging they get in the later levels. There are so many levels in this game and I find it addicting to keep playing to get a higher score. I rated the addictiveness a 6 because these games are very addicting but then it may seem easy at the start but then they become much harder as you go on into the higher levels and it gets harder to complete the task let alone stay alive which really makes it challenging and fun to play.

Story: 4
Like I said before, these games don't really come with a back story of what happened and I think that is good or games like this because, no one want s to play a story that can draw on forever and that changes and gets complicated and hard to follow. Arcade games might have very little to no storyline behind them, and a game like this has a simple objective that doesn't change and that is just to stay alive and win the game by eliminating all of the underground monsters. I scored this game's story a 4 because it doesn't really have one and I don't think that it is necessary either to  have a good arcade game, so don't let the score reflect that the game is terrible, it is just that this type of game wouldn't be as fun to play if there was a long complex story that draws out through the entire game, it really takes away from the fun of it.

Depth: 4
The game has 1 simple task that never changes in this game and that is to defeat all of the monsters that are underground, and it is like that for the entire game. This game is just like pac man, it has 256 levels and then on the last one it becomes the kill screen level and becomes impossible to beat there is a pooka that is right on top of you making it impossible to go any further. Aside from that though, the game does have a huge amount of levels and the objective is the same but the difficulty becomes harder an there are more monsters and they get faster making the game more challenging but at the same time more fun. I scored the depth of the game a 4 because the task is still the same thing but it just becomes harder to accomplish with the increasing difficulty on the higher levels.

Difficulty: 5
The game itself starts out pretty easy and simple but then it gets much harder to defeat all of the monsters and even stay alive. I think that is the main difficult of the game and I give that part a 5 and for the controller part I think that is really easy to understand even if you have never played it before, there are only 2 functions, moving with the arrow keys and then launching the pump with the z button. There is nothing difficult about the controls of the game, they are extremely easy to understand and that really doesn't contribute to the overall difficulty of the game itself. So the difficulty just goes to the task of beating each level and completing the purpose of dig dug which is just staying alive and getting rid of the monsters underground. So I scored them a 5 because of just the gameplay itself and how increasingly hard it can get once you get along in the game.

Overall: 9.6
Overall I really liked playing this game an I thought it was just a fun and addicting classic and I really enjoyed the challenges of the game and how increasingly difficult it got in some of the later levels. I like these kinds of arcade games because of the simplicity of the game's task and how fun and classic they are, I just think that these key components made the game fun. It is so easy to pick up on and play even if you never have before. I never got past level 20 of this  game when I played it but I still enjoyed it regardless and overall I thought it was just a fun and addictive classic arcade game to play. I truly extol this game and all of the fun that it offers. I scored it a 9.6 because it is just one of those fun classics that you never forget and will leave you with lots of fun play time.
Graphics 8   Sound 7   Addictive 6   Depth 4   Story 4   Difficulty 5

Dig Dug is a 1-2 player arcade game in which you have to use your shovel to dig your way through the earth. Stopping you from doing this are two monsters, called Pooka and Fygar, who will continually chase you around. The only weapon that you carry is an air pump, which you can use to inflate the monsters to the point where they explode. (if you start to inflate them but stop doing so, the monsters will get turned back to their normal selves.) Furthermore, rocks are scattered throughout the earth, and you can use these rocks to squash them. If the monsters do not find you for several seconds, they will eventually get turned into ghosts, which are able to walk through the earth. They are invincible and cannot be killed. From time to time, vegetables will appear in the center, and you can get these for points.

Users who own Dig Dug