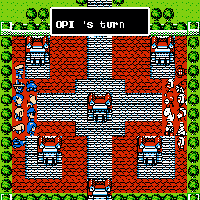 Fire Emblem - Zombie Apocalypse (demo 2) Review by: NovemberJoy - 3/10
Uninspired and unfunny
So, what comes to mind when you think of a good combination? Mario and Sonic? Mario and Mega Man? Whatever you may think, it probably has nothing to do with modern forums and Fire Emblem. But, that's exactly what we're taking on this time. Prepare yourselves, this one'll be a doozy.

The hacked graphics look fine, personally. They're artistically well-done, and there aren't too many issues with them being nserted into a GBA game. However, there are still problems with the coloring, as some of the graphics end up looking horribly glitched. And in a stunning display of incompetence, some of the graphics that are originally part of the game are glitched up and look horrendous. But that's the least of your worries.

The sound appears to be totally unedited. Other than showing that either -

1. They haven't found a way to nsert sound and music yet
or
2. They were too lazy to do it

I'm going with the latter. How about you?

The gameplay is the real disaster. No, not the nuclear WW3 that happens in-game, the gameplay is a disaster. Though it's the same Fire Emblem mechanics, the balance is severely off - several characters are hideously overpowered, with infinite-use weapons that have so much power that there's no reason to use anything else, while other characters are hideously underpowered, to the point of being so useless that their description advises you to use them as suicide runners and enemy bait.

"But it's supposed to be a COMEDY GAME!" Some may cry. But they forgot two large aspects of making a comedy game - make it fun to play, and make it funny. So, why does this game have almost no good jokes in it? It's mostly forum in-jokes that are completely obscure to anyone who isn't part of said forum, or the same jokes over and over again. I swear I've seen the "Main character gets blamed for things that the other characters do" joke at least three times in about five chapters worth of writing.

The characters are relatively flat, and have next to no personality - the main character screws up a lot, and the other characters are mostly the same - their personalities change for no good reason to fit in with the joke at hand. While this could work if done perfectly, this game does NOT do it anywhere near well, much less perfectly. You see, most comedies rely on the characters' personalities to fit in with their jokes, and it works out, but this one doesn't. As a result, even the potentially good jokes are totally ruined.

The writing also torpedoes the gameplay in favor of more unfunny comedy. There's a plot revolving around WW3, and Germany suddenly starts invading everyone and destroying them with soldiers and zombies. Most of the chapters have "survive" or "capture x location" as their goal, and they perfectly reinforce it with one thing - MASSIVE HORDES OF IMPOSSIBLE ENEMIES. I'm talking, like, most of the chapters have waves of impossible enemies pursuing you, and you just have to try to beat the chapter as fast as you can to avoid being slaughtered by them. It's not fun, and it's mostly luck-based and requires you to know what's coming next.

You want to know what I'm talking about with the comedy torpedoing the gameplay? Well, in the beginning of the second chapter, there's a "joke" about a few characters running from some zombies because "THEY HAVE HAX!!!", and then three weak zombies show up. You'd think, "Hey, there's the joke. I'll just kill them now so they don't trouble me later," and go up to kill them, and then, suddenly, BAM! A bunch of zombies with maximum stats come out of nowhere and kill you. How are you supposed to know that's coming? It's like you're supposed to be psychic or something.

To be honest, this hack fails on (almost) every level. The only thing they really got right was the graphics, and even then, they still made mistakes. The balance is broken, the game constantly pushes you along with waves of impossible enemies, the humor falls flat, and you have to be psychic to beat these levels on your first try.