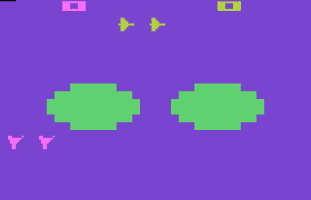 Meet the queen of video games - Ms. Pac-Man! She's all dressed up - and hungry as ever! Score points as Ms. Pac-Man gobbles up dots, energy pills, fruit, pretzels, and of course, those grumpy ghosts.

Ms. Pac-Man Review by: starwars293 - 6/10
Ms. Pacman Review
This is starwars293 with another review. This is my first Atari 2600 review. I am reviewing Ms. Pacman. This is a fun game. However, there are some things not right about it.

The music is the same on every stage there is. The colors change. On one stage, the color is just blue. You even only get just one ghost to chase you. You also need to get the food in the game or else you die and lose a life. It is fun, just needs to improve. That's pretty much it.

Some things in the game need to be improved. For one thing, the makers should make it colorful for the stages instead of one color. Second, they needed to added the other three ghosts. Third, they should've made it like the classic pacman. It probably would've been so much fun for people. It could be like the arcade version. Let's move on to the review.

Graphics-They're okay I guess, just need to make the stages more colorful instead of one color on some stages. That's pretty much it.

Sound-The sound is the same on every stage. It's not catchy, but it's pretty good I guess. I was kinda hoping it would be an Atari version of pacman's theme really.

Addictivness- I really would probably it again. I mean, I did like this game, it just needs to improve really.

Story-There isn't a story really. You just have to complete each stage like in the original Pacman and collect the things that look like Tic-Tacs

Depth-It doesn't take that long really. It's pretty much the same thing you do in every stage.

Difficulty-The game isn't really hard. It's pretty easy actually. You should be able to beat the game anyways.

Overall-The overall of the game isn't that great, but it's fun to play anyways.

Wrap Things Up-Ms. Pacman isn't that great of a game, but it's fun to play. If you want, you could play the game and try it out. I don't mind. I can't stop you.

Glitch: Make The Ghosts Disappear
Push Select while the game is showing the demonstration. The ghosts will alternately appear and disappear while they move around the maze.

Users who own Ms. Pac-Man