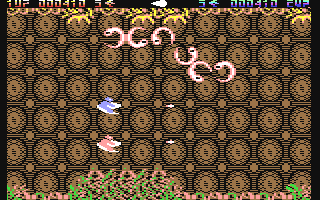 Gunstar Heroes Review by: Zircron Swift - 8.9/10
Gunstar Heroes Review
Many games on the Sega Mega Drive weren't that good compared to other consoles. Sega were the overlooked gaming community over thrown by Nintendo. They had good games, but Nintendo produced better. Some say this is a view of perspective (and I am a pretty big Nintendo fan), but I think that Sega, in all their efforts, didn't support the best titles. However, they did have some exclusive titles that were superb in their own right. Although it didn't have the same charm as Nintendo seemed to breathe into their games, it did offer some superb game play. One of the best for the Mega Drive was GunStar Heroes. Possibly one of the best Hack and Slash type games without the hack or slash. What makes it a classic for Sega? Lets find out.

The game starts off with a cut scene of the story of the game. It looks like some guys are chasing someone or thing, as they are on a tight schedule. There seems like the earth was at stake and now.....Huh? A Mega Man 2 intro like thing were you pan up a very tall building. Whose up there? WHAT? M.Bison? A Street Fighter in a futuristic game? Well, as it turns out, this isn't M.Bison, but in fact Smash Daisaku, an evil menace who wants to (you guessed it) take over the world (of course!). I'm sorry, I just had to say it, I just had to. He wants to get four powerful gems so he can reawaken Golden Silver from G-9's moon. Golden Silver was a machine that traveled millions of miles to nom all the resources from G-9. Yet Dr Brown (sorry, not that Dr Brown) was able to extract four gems from it's power supply and trapped it on the moon. And so we have a plot.

So you play as Gunstar Blue (or Red, depending on weather you are player one or two), and your twin brother Green has been taken by Smash and is brain-washed to do what ever he says. They got all the gems, it's your task to get them back and get Green back to his senses....oh, and to wallop that Smash guy. You have a selection of four levels to choose from. Each has a unique twist and epic outcomes. There's the village of adorable-tiny-green-guys, the mines, the rocket launch, and the board game level. Each has it's own boss (or bosses) which keeps variety within the game. Such as cube guy, or the multi-weapon robot (although they ado tell you the boss name, and the names of the attacks before you fight them.) Each boss has a health meter, but it's in numbers. When this number reaches 0, you have beaten the boss. The weapons system is superb. You get to choose what you start with. You get a fire blaster, a blue lazer gun, a gun that fires green homing arrows, and a flame thrower. But the best part about it is that you can combined the weapons together. How awesome is that? One property of that weapon is combines with the attack of this one! So you can get homing fireballs, or lazer throwers....You really have to try them out to see which suits you best.

You fight hoards of enemies with either your weapon, or your bear fists. You can grab them, and then throw them if you are close enough. I find this particularly epic, as you can do it in mid-air! You can jump, grab an enemy, and then throw then to the ground. That's the kind of thing I expect from Shinobi. Anyway, after you beat all four levels, you get into another level, with the heading "Kill them all", which matches perfectly on what has just happened. They sure do know how to make an epic last couple of levels. When you think it's over, there's another thing round the corner. Each of these puts in an epic level that some games only have one of. They really wanted to make this game good to have put the thought of really fun levels near the end.

The controls are near perfect. You have maximum control over Gunstar Red. You can press the jump button in mid-air to preform some dive attack. this is were throwing enemies in mid-air comes in. It's helpful to get by a level faster, and you can even wall-jump with this move ^^ Get in! The music isn't half bad either. Matches the mood and level style rather well. Not too good as it gets stuck in your head, but a nice tune to get passed a level. The difficulty is just right. With a choice between easy, normal, hard, and expert, there's a difficulty for everyone. It's got that rare level of difficulty were it's challenging, but not too much so for the new players. It only gets really hard at the end, and this is on normal difficulty. The satisfaction of beating the main boss at the end of every level (including the last) makes it a great game to play, even if you are playing it again.

Overall, I give this game a 8.9/10    It is a classic in it's own right. This has to be one of the best games not only on the Mega Drive (Genesis? Game Gear? Can't they just stick to one console per game? -.-), but probably one of the best side-scrolling shooting games of it's time. The effort put into this game really shone and shows just what the Sega consoles are capable of. As you progress further and further through the game, so does the epicness of it. The weapon combination system is a great way to make you explore all the possible weapons this game has to offer (my favorite one is the fire blaster with the flame thrower ^^). Although seemingly short on an overview, once played, it is very lengthy in game play.
Graphics 8   Sound 7   Addictive 8   Depth 7   Story 7   Difficulty 8

With the military detained and the planet in serious peril, two brothers vow to find and destroy the evil power that now threatens Gunstar 9. If they succeed they shall go down in history as Gunstar Heroes! If they fail... Gunstar 9 shall perish. Explosive 2-player action. Race through impossible mine shafts at mind-numbing speed! Do battle with incredible mechanical menaces! Hang from ledges, shoot in 360 degrees and body slam the mindless minions!

Users who own Gunstar Heroes