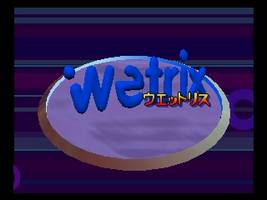 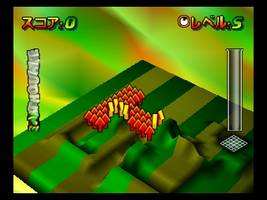 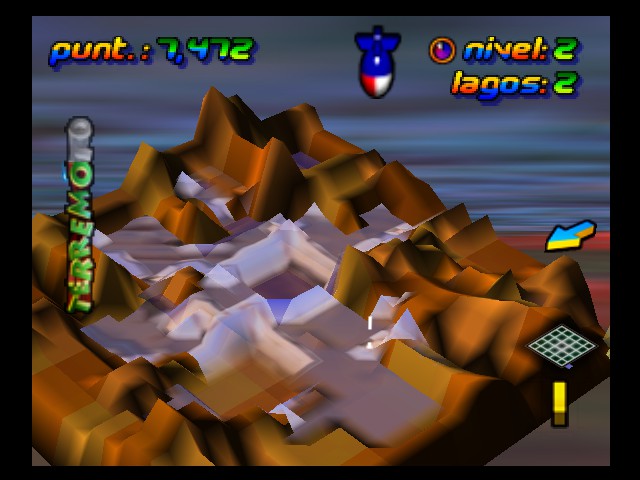 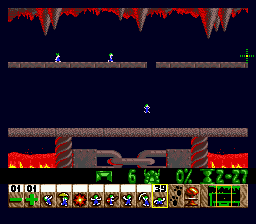 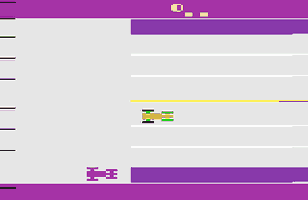 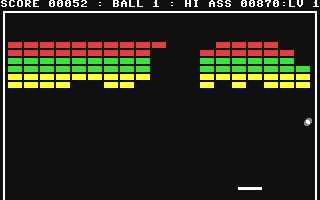 A rainstorm so fierce, it will keep you from leaving your home for the next six months. Wetrix just might be the most addictive puzzle game of all time. Using randomly shaped 3D blocks as they fall from the sky, you must create a series of lakes and dams before the heavy rains appear. Because if the water drains, you lose! Sound simple? Well, mix in a few natural disasters and bomb attacks, and suddenly you need to muster all your strategy and skill to combat nature's fury!

X Wetrix
This game doesn't have any screenshots

Wetrix Review by: Eirinn - 9.5/10
Just another puzzle game?
Wetrix: is it just another puzzle game? This game may bear a simillarity to Tetris in name, and a few of the pieces used during gameplay, but the similarities end there. The playing field is shown from an isometric view, and is a flat square. Your goal: to keep water from draining over the edge of the playing field, or through holes in it. You do this, by guiding the pieces that fall from the top of the screen, to the playing field. During the course of the game, you will be given various types of playing pieces, including "uppers" which raise the area of the playing field that they land on; "downers" which lower the raised areas they land on; fireballs which will evaporate all of the water in any body of water that it lands in, and lower any dry raised area of the playing field that it lands on; bombs, which will make a hole in the playing field, even if it lands on a raised area; and drops of water, which, as you might expect, places water on the playing field. Where you place each of these will determine how long you will last in the world of Wetrix. Now, let's get to the reviewing!

Graphics: 9/10
Excellent.
While there isn't much to look at, what you do see looks great, and I've never seen a reason to rate a game low in a particular category, just because not much is asked of it in said category. The detail put into the raised areas of the field are incredible. They're super smooth, and beautifully 3-D, rendered much better than the average 64 game (though most were impressive for their time). Also the water effects are great as well, very realistic. They lend a great deal toward the high graphics rating, and yes, the realism and overall fun factor. Hey, graphics may not be extremely important, but great graphics can definitely help make a gaming experience more enjoyable. Graphically, Wetrix thrives on small, often overlooked details, which happen to be the first things I look for when checking out a game's graphics. Unfortunately, the particle effects of other items are lackluster at best, and they feel uninspired, and recycled. For example, the eplosions seem to be only slightly altered versions of the fireball's impact effects, or ice cubes, etc. This is the only reason I don't give the graphics a 10, as it really deserves it in other ways.

Sound: 9/10
Excellent.
The sound effects are where the game really shines in the audio department. The water sounds are incredibly realistic, and will be one of the first sounds to greet your ears when you start the game. The only word that can describe the water effects acurately, is beautiful. Also the sounds of the sirens when mines drop, are excellent as well. They pull you into the atmosphere, and absolutely immerse you in the experience. The other effects are fine, nothing special, but not disappointing. The only problem I find with the audio is a lack of variety. The background music, I find very enjoyable, and very well selected for the game. It grabs you right from the start. There is a different tune for each mode, and it manages to set the mood very well, for each occasion. The robotic narrative voice is also a nice touch, and also serves to add to the atmosphere. The only issue with the audio, is the lack of variety in the sound effects. Yes, once again, variety is the game's downfall. However, what it lacks in sound quantity, it more than makes up for in sound quality, and though it doesn't offer much by way of audio selection, what we do get is excellent quality.

Depth: 10/10
Incredible.
Surprising for a puzzle game to get a 10 for depth, isn't it? To be honest, I didn't expect it either. I actually expected it to be low. While every mode is just, keep the water from filling the drain, they all offer twists and variations that manage to keep it fresh. And with five single player modes (classic, challenge, handicap, pro, and practice) a multiplayer option, and fifteen variations on the five single player modes. Not to mention the two types of practice, and sixteen lessons (eight 1 player, and eight P1 vs. CPU) that, once completed, unlock special "floors" (playing fields). All things considered, Wetrix delivers alot more depth than most other puzzle games. The possibilities are endless, or at least, vast. So much so, that the player could spend quite some time playing if they wanted to master every mode.

Story: N/A
As usual with a puzzle game, there is no story to be had here, which is a shame, since this is such an epic game as it stands. Had a good story been implemented, this would have been even more incredible. Still, a lack of story doesn't take away from the fact that this game is a great among greats.

Addictiveness: 10/10
Incredible.
I admit, I was torn between rating this 9 and rating it 10. I finally decided on a 10 for various reasons, one of which being that I rented this game one time when I was 11, and I never forgot it. In fact, once I got back to gaming after ten years, this was one of the first games I got. The other reason being, I play this game often, and I will definitely play it again within a matter of hours. In fact, once this review is put up, I'll probably be heading to play it again, and I don't even tend to enjoy puzzle games. For puzzle gamers, I could only imagine the addictiveness that this game would offer. So fair warning: don't start this one until you have ample time to spend glued to your screen.

Difficulty: 6/10
Challenging.
While this isn't the easiest puzzle game out there, it isn't overly difficult either. It's challenging enough to be more than average difficulty for a puzzle game, but not so difficult that I would actually call it hard. Getting all the way to level 10 on the other hand would be a challenge I'd rate at least a 9, but since the game can't be beaten, I would say the closest you could get to that, would be to score an "expert" rank on every mode, which would also be very difficult indeed.

Overall: 9.5/10
Excellent.
Wetrix is a puzzle game for the ages. It offers hours of puzzle gaming fun, that gamers of all ages and genre prferences can enjoy. And with all of the gameplay variations that are offered, you won't have time to get bored. A 9.5 is high, but this game earned it, by dominating all puzzler opposition so soundly in every category, with the exception of story. Why we never saw the development of a Wetrix series is beyond this gamer, but at least we can always go back to the original for some excellent puzzle action.

In conclusion, Wetrix was a giant among puzzlers, towering well above it's so called peers, but it somehow slipped past the puzzle crowd's attention. I would recommend this to anyone looking for a fun and different game, especially fans of the puzzle genre. If you enjoy a good puzzle game, you definitely will not be disappointed by this classic. All of these reasons and more, are why I don't hesitate to say, Wetrix is one of the greatest puzzle games of all time, if not the greatest.
Graphics 9   Sound 9   Addictive 10   Depth 10   Difficulty 6

Wetrix is a 3D-Puzzle strategy game, published by Ocean Software and developed by Zed Two Game Design Studio, which was released in 1998.

Score a rating of Master in any game mode (Excluding Practice)

Score a rating of OK in all game modes (Excluding Practice)

Score a rating of Expert in all game modes (Excluding Practice)

Score a rating of Super in all game modes (Excluding Practice)

Once you have the green background at the main menu, hold the C-up button to make a watersprout or C-down to make a vortex that can be controlled with the joystick.

Users who own Wetrix