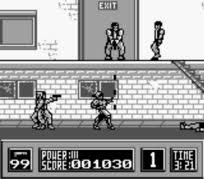 Based on the 1987 movie of the same name, Patrolman Alex Murphy was killed on the streets of Detroit. The major corporation there, Omni Consumer Products (OCP) saw an opportunity to sell a new kind of law enforcement officer to the troubled city. They took what was left of Murphy, encased it in titanium armor, wiped his memory and created RoboCop. Now it's up to RoboCop to clean the streets of Detroit and eliminate the one responsible for his murder, Clarence Boddicker. But it looks like Clarence might not be the kingpin of this town...

RoboCop is a side-scroller shooter. The player, taking the role of Robocop can move left or right, duck, jump and fire his pistol in front, up or diagonally from himself.

RoboCop is a Shoot-'Em-Up game, published by Epic Sony Record, which was released in 1990.

Get more ammo for the Cobra gun

In the second last stage in the steel mill, kill Clarence Boddicker and take his Cobra gun.

You will have 10 shots for the Cobra gun.

However, if you walk around and PUNCH down enemies while you are equipped with the cobra gun, your ammo for the Cobra gun will increase!


Similarly, when you face ED-209 at the end of the steel mill stage. If you manage to jump and SUCCESSFULLY PUNCH the ED-209 while you are equipped with the Cobra gun, you ammo will increase to 92!

Wait near an energy tank and intentionally allow Robocop to get shot. Touch the energy tank before dying to advance to the next level.

Users who own RoboCop