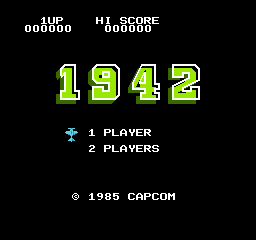 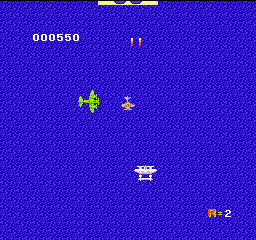 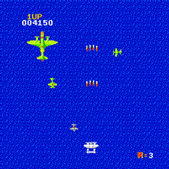 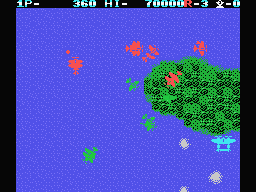 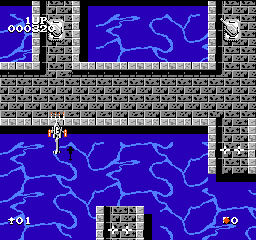 1942... you and daring fighter pilot "Super Ace" are engaged in realistic, thrilling and challenging high-flying battles with the enemy. Over land, on the sea and in the air, your own skill and dexterity... combined with Super Ace's flying mastery, duel enemy pilots in fighter and bomber craft. 1942... it's airplanes taking off and landing on ocean-going aircraft carriers... disrupting enemy formations ready to attack... intercepting enemy air-warriors you must defeat by "blasting 'em out of the sky." Will it be victory? Or defeat? It's in your skillful hands!

1942 Review by: Azul Fria - 5/10
Turn the volume off and just enjoy the game.
Overview
This is the first game in the 194X game series and you are in control of a green plane flying over various terrain such as oceans, islands, and occasional sand with various planes that are seriously out to shoot you down but more on that later. Bear in mind that this is the NES version so my opinion is subject to change if I decide to review this game on another platform.
Gameplay - C+
This game can get kind of boring easily as all you have to do is shoot enemies and avoid bullets all day. The object of this game is survive 32 levels of shooting down planes that come from all sorts of directions including some of them that like to sneak up from behind you to crash into you first and if you are fortunate to avoid the initial kamikaze attack, then you have to worry about avoiding the bullets they shoot back at you in a three way pattern and worse of all, these type of planes take several shots to destroy them but yet as big as they are they end up dying by crashing into you too even though you die as well. Most of the time you are flying over an ocean trying to fly your way safely to a docking port and after your score is tallied based on enemies shot down and rolls unused, you are told how many levels you have left to survive. Occasionally, you'll have a boss battle against a giant plane that is 100 times bigger than yours and I'm not kidding, that sucker is huge but yet, if you keep your guard up, this plane goes down easily.
Graphics - B
The graphics on the other hand are actually great but not perfect. The terrains are all colorfully displayed beautifully and well mapped. Just the boss battle take off the points from perfection because the background disappears and you are fighting a plane in a section that is a blue void. In all, the graphics is the only aspect of the game that gives it any saving grace.
Sound - F
Oh my freaking goodness. If you got a TV that allows you to turn down the volume, then turn it all the way down. If your volume knob is broken, then I feel totally sorry for you. This game hardly has no music at all. Throughout the whole game is Morse Code, Morse Code, and more Morse Code with a few gunshot sound effects combined with it to make a sorry excuse for a rhythm beat. The other sounds are bad. But they sure could've used sounds for blowing up the smaller enemy planes or gave a sound warning for enemies coming from behind.
Replayability - C
As long as you don't beat the game, then the replayability is a little bit ok if you just want a game to give a challenge and really test your eye coordination. As to why I mentioned not wanting to beat the game, read my final recommendation.
Overall - C-
I gave this a C- because there are people who just play it for the fun of it and not care much about the game aspects. I won't spoil the ending but you can check it up on Youtube and you will know the main reason my tagline says "Turn off the volume and just enjoy the game." and after surviving 32 levels for that piece of monkey crap ending you would want to gun gun blast on the TV.

A conversion of the arcade game, 1942 is a vertically scrolling shooter for one or two players. Taking place in 1942, you are a pilot "Super Ace".