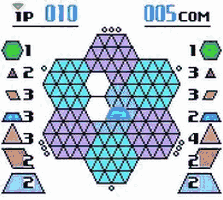 PokeMon Puzzle Challenge Review by: XxEzraxX - 8.8/10
Pokemon Puzzle Challenge Review
Imagine yourself locked in battle with a Gym leader, but instead of commanding your Chikorita to use Razor Leaf you fit together blocks in a puzzle. That is what makes Pokémon Puzzle Challenge so different than an average Pokémon game. There are slowly moving blocks raising up from the bottom of the screen with different shapes on them, your job is to match them up into the more you match together the higher the score and the stronger the attack you use. This game was a way to get those fans of Pokémon that were not that into battling to have fun with a game too.

I got this game when it first came out in I believe '98. It struck me as odd considering Gamefreak didn't make the game but Intelligent Systems did (the same company that made Paper Mario). Here is the low down on the game. You play as a beginning trainer in the Johto region, and you travel from town to town collecting gym badges. Sound familiar? Well it is a little more different than you think, you don't actually navigate anywhere you end up in these towns have your gym battle and then move on to the next town.

I rated this game an 8.8, I really enjoyed it. It was quite fun, and when you get far enough can be quite the challenge. And there is more than just battling gym leaders, you can also play the game as a time run to see how long you last, line clear where you must fit all the blocks under a line that randomly shows up during your game, puzzle where you must clear all of the puzzles in a set amount of moves and garbage where you must clear the puzzle while getting rid of your opponents attacks or garbage (which I assumed is what they were called since the game never really told you anything).

I gave the graphics of this game a 9, because well for gameboy color graphics they were actually really good. The detail in the Pokémon where amazing, the overworld had a nice detail to it even though it was the same background no matter where you went and you could which gym leader was which. The blocks looked nice and neat. The sound I had to rate a little lower, a 7.8 actually. Although I liked the music the game had, they easily got stuck in my head and drove me crazy later on when I wasn't even playing the game anymore. Hearing them for the first time, they are catchy and enjoyable but leave your sound on all the time and you will want to kill yourself later on just to rid yourself of the noise in your head.

I rate the addictiveness a solid 8, I became obsessed with the game saying I would only play a match or two ends up into playing well over half the night sometimes even longer. I had a great time actually playing the game, and I still do (since I still have the cartridge). Trying to beat your recent high scores starts to become your goal, getting farther and farther in the gym leaders battles (which consist of three levels easy, normal and hard) and even unlocking the rest of your Pokémon team. I won't give away too much about that, but I will tell you that if you happen to run into a random trainer during the gym leader challenge expect him or her to give you their Pokémon. Also you could hatch eggs that are given to you during the game.

Like most Pokémon games I didn't bother to rate the story, because there is no storyline your only goal is to get better and better at the puzzles. The depth I rated a 6, only because this game is not too long but can be a time consumer when you are trying to beat high scores or if you happen to get stuck on hard mode in the Elite Four like I did. In all reality you are doing the same thing over and over again with the game and that is the only real reason why it is even kind of long in the first place. For difficulty, I would give this game a 7 at the beginning this game is probably one of the most easiest games you will ever play, keep going however and you will soon find yourself wanting to snap your gameboy in half. It can and will get quite frustrating, especially if you end up making little mistakes that cost you the game.

Overall this game is pretty good, I really enjoyed playing it. Nintendo found a very nice and steady way of incorporating competitive battling with simple puzzle solving and I think it worked out. I recommend this game to just about any Pokémon fan, unless of course you are not into puzzle games.
Graphics 9   Sound 7   Addictive 8   Depth 6   Difficulty 7

Pokemon Puzzle Challenge is a Matching Puzzle game, developed by Intelligent Systems and published by Nintendo, which was released in 2000.

Codes
Disable Stops
When you power on the game, wait until Pikachu smiles, then enter:
Left, A, B, Up.

With this code, the blocks will no longer temporarily stop rising when you score a chain or combo.
Max. Speed Increase
At the beginning, right when Pikachu smiles, enter:
B, A, Left, Left
This will increase the speed drastically if you're on speed 99. Normally, anything at or above 50 will continue at speed 50.

Intense Mode
To open up intense mode on challenge, highlight super hard mode then press select+A.
More Options
On the option screen hold select and press A, some more options will appear below the gallery option.
More Records
While in the record screen, press and hold Select+A and you get more records. Now you can display how much combos, chain you got and how much blocks your cleared.
Super Hard Mode
Highlight ''Hard'', then hold select and press A button.

Users who own PokeMon Puzzle Challenge