Play Gatsbee online with Arcade browser emulation for free! Gatsbee (MAME) game rom is loaded with features in our flash, java and rgr plugin emulators. Nothing to configure, we've done it for you!
Play Retro Games
Game Browser
Netplay Lobby (0)
Play Your Games
Xbox One Emulator 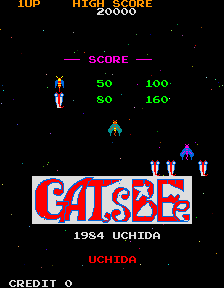 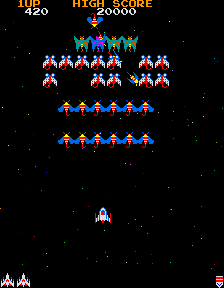 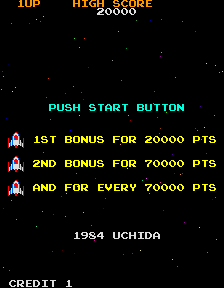 Gatsbee Review by: Mohammedroxx3 - 8/10
Hack/Clone of a Simply Awesome Game
Well, hey guys. It has been a while since I made a review. I have pretty much been occupied with homework and studying for A.Ps. But luckily I now have the time to make a review. (And first thing to point out, NO, this is NOT for the TDV so go lip about something for the TDV elsewhere, just doing my staff job. I honestly didn't feel like making a review thanks to the TDV but I can't stop myself because I need to do my job as a staff member). So anyways, let's go ahead and start on the review!

"Gatsbee?" Well, that was actually the very first question I asked myself the first time I saw this game. To be honest, I really have no idea what "Gatsbee" even means or if it is related to the game in anyway, I don't even think it's even a word lol. I guess it's just more of an average made-up name for a game... Or does it actually have some type of meaning? Well, I don't really know so I'm not going to make up some information about it nor am I going to say anything false.

Anyways, so this game is actually a clone (or hack? Not sure whats the difference.) of Galaga from Namco. As you can guess, it is an arcade/mame game. This game is quite similar to Galaga in several ways, but with a few changes here and there, which I will talk about in the upcoming sections of this review. Anyways, let's go ahead and dive in a bit deeper to the game!

So, most of us may already know what Galaga is and how to play it. A very simple game, Right? Well, I got to make my review 100% noob-friendly so anyone and everyone can read and understand what I'm actually talking about. So, just in-case you have no idea how this game works, let me give you an idea.

So, you see that ship in the bottom of the screen? Yes, that is obviously you. You are the one controlling that ship. You can move it left and right just like the original Galaga in the same speed. However, here is something new, unlike the original Galaga, you can also move the ship up and down, but, you can't really move all the way up. You can only move up to like a little less than half up the screen. Well, it is actually pretty hard to say this in words but if you try it, you'll easily understand what I mean. And of course, you can move up-right, up-left, down-right, down-left... etc.

Now, what you are supposed to do is to actually shoot your opponents, which are all of the other ships on the top area of the screen. To shoot, just press the ctrl key on your keyboard. As you can guess, your opponents can also shoot your with projectiles and actually charge towards you, so, you got to annihilate all of the opposing ships without bumping into them or getting shot. If you do end up bumping to them or touching their projectiles, you lose a life. If you run out of lives, obviously you get a gameover. So, the gameplay itself is very simple, and yet fun. It's really fun to dodge your enemies and try to get rid of them. I guess I explained the gameplay enough.

The graphics....... aren't so bad, I guess. The graphics aren't really very stunning, vivid, or amazing, but not really dreadful or bad. And there were a few changes in the graphics compared to the original Galaga. The first change you will notice is that the ships look different from original. The ship you control looks more like a rocket, which is pretty average for how a ship would look like but it's alright. Also, what makes it look awkward is that the original ships from the original Galaga still shows up in the amount of lives you have left. (Shown at the bottom-left of the screen) And the enemy ships looks more like a bunch of bugs instead of actual ships. Well, the original does have sort of the same case here but in this clone/hack, the enemies look even more like insects than ships but nothing really wrong with that. There are also a few slight color changes on some of the text. (some of the text is orange instead of red) Depending on your emulator that you use to play this game, it may or may not look slightly fuzzy, but, best not to judge that since that isn't from the game itself. To sum that up, it is sort of colorful, but not vivid or extraordinary, but at the same time, not bad at all. So, in my opinion, it is pretty decent for a classic arcade game.

Well, at first, the game may seem pretty fun and somewhat addictive. But after a while, you might start getting tired of playing the game. Maybe because you went pretty far in the levels and then you get a game over, or you keep getting gameovers, or the game itself just loses your interest fast. It sort of depends on what type of games you like and how persistent you are in playing games. (If you rage-quit easily, this game won't be addictive at all to you since it is fairly difficult)  Well, for me, I do find the game a bit addictive at first, mainly because everytime I win a level, I simply just want to keep moving on and on to the next levels, but once I get a gameover after going pretty far, I get in to the mood of playing something else since I don't want to start from the beginning of the levels all over again. Thats about it for the addictiveness.

I honestly don't know if there is really a story behind this game or not. Well, based off this game, it doesn't really show you any type of story behind the game itself. Just instantly starts the game once you play it. No intro, no hint of a story, nothing. Just the game. So, there is really no story that I can rate or talk about. Though, I can see great potential in an interesting story behind this game but I guess they decided to not put any type story. That doesn't really matter much to me, well, thats in my opinion though since I mostly look at the gameplay for classic games. Nothing more to say here.

Well, there isn't really any special options, modes... etc in this game. However, this game does have an unlimited amount of levels to play (Well, I honestly never reached far enough to know whether this game does have a certain amount of levels or if it keeps going on and on but either way, it does have a lot of levels), though, there isn't anything very unique or special in each level. Just the game gets harder and harder as you go on since your enemies will get more aggressive. There isn't really much to talk about here. It's just a simple game that really offers nothing but the game itself to play, but I guess thats good enough for a mame game.

Well, one thing that makes this clone/hack of Galaga pretty different from the original game is that it's a lot more difficult than usual. Even the first level is pretty challenging. Like normally, in the first level of the original Galaga, you would expect the enemy ships to just arrange first before attacking (which pretty much gives you a chance to easily destroy all or most of them before they even attack) but in this hack, they attack right away as they are arranging as if you are already in the 2nd levels or so. It's as if the difficulty of the levels are a bit ahead than normal. (I mean that the game starts out hard and then it continues getting even more difficult instead of starting out easy then getting hard.) Though, the ability to move up and down unlike the original does sort of help you in dodging the enemy ships and their projectiles. It might even be necessary to move up and down to sometimes dodge the ships when they charge into you. To sum that up, it is a lot more difficult than original, which can actually make the game more fun to play, but people who would ragequit from games easily might not like it. lol

Well, I guess it is a pretty decent clone or hack to try out sometime, especially if you like playing Galaga or games like Galaga. Thanks for reading this review! (If you actually bothered to read all or at least some of it) Don't be afraid to leave any feedback. Any feedback will be appreciated so I can learn more ways to improve on my reviewing for my staff role!

This is a hack/clone of Galaga (Namco rev. B) featuring:

1. Graphic hacks. (New ship, new enemies... etc)
2. Slightly more difficult.
3. Unlike the original, you can move your ship up and down, not only left and right.

8
Hack/Clone of a Simply Awesome Game   Mohammedroxx3
Well, hey guys. It has been a while since I made a review. I have pretty much been occupied with hom...
Graphics 7   Sound 8   Addictive 7   Depth 7   Difficulty 9