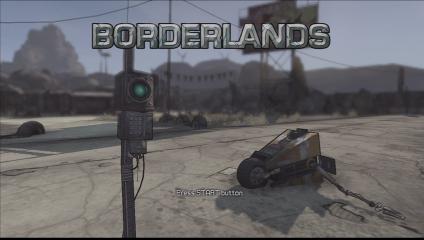 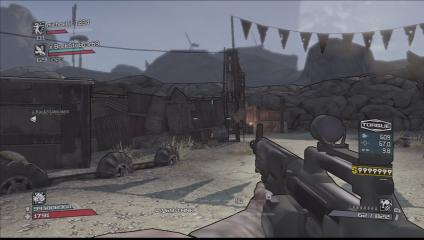 Borderlands is probably the only game that I've ever seen not lie as it states something like "bazillions" of guns. This game literally has bazillions. Okay, maybe that's slightly exaggerated... however it does have a rather unique method of creating the guns in-game. Instead of using a pre-created set of guns, like Call of Duty does, Borderlands uses a Gun Generator which means that it's pretty damned difficult to get two identical guns. (I've actually heard it said that it is nearly impossible.) Personally, I have never gotten two guns even slightly similar. (As in, share any two stats.)

Guns aside, Borderlands boasts a seemingly endless quota of quests to complete. Several of the quests allow you to proceed along the primary story line. However, many "side" quests give depth to the story line and allow you to do, meet, and kill more.

On top of that, there are quite a number of characters to get to know from the Claptraps to T.K. to Mad Moxxi and beyond. (Mad Moxxi is personally my favorite.) Various quests can introduce you to new characters. T.K. is somebody that you get to know very early in the game when the "tutorial" quests take you over to him for a few main-line quests before you can start freely choosing which quests you take.

You also have the "monsters" like the Scags and Bandits, two of the enemies that you meet from the getgo. Scags are my favorite creature in the game. The others that you'll meet along the way are Spiderants, Rakks, Scythids, Crab Worm Larvae, Trash Feeder, Drifter, and the Craw Maggot. Sure, that sounds like a puny list but each enemy has several ranks. Take the Scags, for example. They can appear in any of the following ranks: Scag Pup, Scag Whelp, Adult Scag, Spitter Scag, Elder Scag, Alpha Scag, and Badass Scag. Add in the fact that the higher level Scags can also be elemental (corrosive, incendiary, shock) and you've got a fairly large variety of enemies. And that's just the Scags. Each enemy (exempting bosses) has a similar tier. Oh - and let's note that, as you proceed through the playthroughs, the names change. For example, "Badass" goes to "BadMutha" in Playthrough 2 and then "SuperBad" in Playthrough 2.5.

The enemies didn't get all of the uniqueness. Each of the four characters that you can choose to start as (Lilith the Siren, Mordecai the Hunter, Roland the Soldier, and Brick as himself) has his or her (in the case of Lilith) own skills that the player can choose to upgrade. Of course, you do not receive enough skill points to max out everything so you have to choose wisely. Fortunately, resetting the points is not too difficult or costly so you can try various skill sets.

Game of the Year edition exclusives also spice up the game, if you so choose to obtain the GOTY version. Between Mad Moxxi, the Claptrap Revolution, and General Knoxx's Armory add some pretty neat end-game content. However, I haven't actually played any of the end-game missions yet so... you'll have to experience those on your own or read about them in another review. Sorry folks. (D:) From what I hear though, they are pretty friggin' awesome. And Mad Moxxi's introduction into hers is amusing enough. For me anyhow.

You can check out Moxxi's introduction in the below video:
[youtube]8V1hlHGNZqs[/youtube]
And if the video doesn't work for you, here's the URL: http://www.youtube.com/watch?v=8V1hlHGNZqs

The 360 isn't exactly tooting it's horn for graphics. With that in mind, Borderlands' graphics aren't as good as the best of what Microsoft has to offer but isn't the worst either. Actually, the main issue with Borderlands is that unless you have a large TV, it is rather difficult to see everything on the screen clearly because there is a lot of detail in a very tiny space.

There's not much to say about sound in Borderlands. It's clear, it's crisp. It's there.
Although, admittedly, Borderlands is one of the few video game soundtracks that I can listen to for long periods of time without it annoying me. I suppose part of that is due to the fact that it really relies on real world sounds to fill the "Sound" block in-game, like the cries of an attacking bird for the Rakk or the growls of an angry dog for the Scags.

Borderlands is a 9 in the addictiveness category for me. Why? Simply because it's such an overwhelming game. There's so much to do that, while a re-do is almost guaranteed, it is a lot to start into and get ready to do over. Although, to be fair, Borderlands offers so much that by the time you reach the point of needing to start over, it is difficult to recall the exact details of the missions in the beginning.

Borderlands' main story is, while engaging, not very long. The game relies more on filler missions than anything to add detail to the story - and since those "filler" missions are not required to progress through the story itself, then it doesn't really count to the story rating. I personally enjoyed the story in Borderlands, but I wish that there had been more. It was your typical bad guy team vs. handful of good guys.

Sheer amount of content awards Borderlands an automatic ten in the depth category. Between storyline missions, side missions, and endgame quests, Borderlands has so much to offer in the category of "depth" that I doubt you will find that you have completed everything even after six or so playthroughs.

Borderlands is probably one of the more difficult games that I have played. The controls are extremely simple but to actually manage to progress in the game without multiple deaths is rather difficult. Of course, dying doesn't actually hurt you too much. Except that it costs a hefty bit of money to respawn. Borderlands definitely perfected the art of "Easy to learn, difficult to master."

All-in-all, I'd say that Borderlands was definitely worth playing. I absolutely love the game and it is one that will probably keep my attention for a while yet. (Even despite the second one that has now found its way into the hearts of many die-hard fans.)
Graphics 8   Sound 10   Addictive 9   Depth 10   Story 8   Difficulty 8

Borderlands applies a mixture of shooter and role playing tactics, featuring a protagonist of the player's choice. Whatever skill tree the player chooses, their aim is to seek a treasure hidden in a wasteland planet called Pandora. Filled with bandits and mercenaries, Pandora threatens the life of the character at every turn. It's up to the player to defeat each enemy, improve their skill set, and find the alien-hidden treasure.

Users who own Borderlands