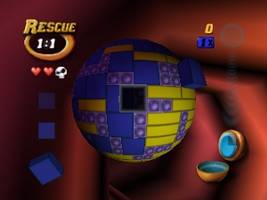 The story starts with a league of space pirates hovering over a world full of people and life. Suddenly, one of the pirates (Artemis) teleports down to the city with a hoard of their minion soldiers;who spread throughout the world. Above, the leader Altair uses a tool called the Omni Cube to drain the life from the world (Blue Harbor) and trap it in a type of vivarium. Afterwards he returns to the ship with his partners Orion, Regulus, and the leader Altair, and they move on to the next world, Planet Bomber. Bomberman sits on a cliff overlooking the city when he sees the fortress hover down to his planet with 4 world they conquered anchored below. Then, blinding lasers blast at a populated area. The people start to run to evade the lasers but some aren't so lucky. Bomberman sees this and is alarmed but is then surprised by a flying white and gold cloaked angel like figure (Sirius) that emerges in front of him. He tells Bomberman that he has a bone to pick with them and will help him along the way. He also says that Bomberman must destroy the 4 anchor and that will destroy a force-field that protects the main fortress. Then he flies away and Bomberman sets off to beat the enemies.

The four world the are anchored to the fortress are called "Green Gardens", "Blue Resort", "Red Mountain", and "White Ice". They all have four stages within, 2 in which are boss battles. The stages each have their own means of completion. After Bomberman beats the final boss for a world, the anchor breaks away and the vivarium disintegrates. When all four worlds are freed, Bomberman then makes his way to the "Black Fortress" and conquers its stages to face off against Altair.

The gameplay in the story-line is interesting but still with a classic feel. They're are items scattered within that can help, like fire blast and max bomb upgrades; along with remote control bombs and explosive red bombs. Bomberman can jump, but can scale gaps by placing a bomb in the gap and bouncing on and over it before it explodes. This is much easier and safer with the remote bombs. The second stage  is a boss battle with the 3 underling pirates and at Green Gardens, Sirius battle Bomberman as a training session. The 4th stages are bigger animal like bosses, excluding Black Fortress which is the other way around. Also, each stage has four gold cards to collect; they're earned in the boss battle by how you hit and attack them. There is 100 all together and when all are collected, a secret world called "Rainbow Palace" is unlocked with is secret boss and a little more to the story!

The four player multiplayer is great and players can now move to above or below opponents with stairs to other levels. There's the classic power-ups like blast increase, max bomb increase, hearts that let you take a hit, and the contagious "Disease" that negates your bombs, buffs them to the max, shrinks you and much more. It's similar to the other classic Bomberman games and feels just right.

The soundtrack is pretty nice and one of my favorite. Each world seems to have a soothing song, even after their invasion and enslavement! Bomberman also make little "ohhs", "kaas", and "yuu" sounds when getting knock down and getting up. The multiplayer song stays the same but its a beat that gets you riled up to battle so it's fine. You're not paying much attention to it when yelling at your friend for throwing you off the course. The graphics are just like any other N64 game, not too shabby; not to much to say about it.

So I give this game a solid 8. It changed the course for the series and spawned to sequels - Bomberman Hero and Bomberman 64: The Second Attack. I think it's a great game for both single play and multi-play. I give it the Zimkin thumbs up!
Graphics 7   Sound 9   Addictive 8   Depth 8   Story 7   Difficulty 7

The inhabitants of Bomber World have a unique philosophy of life: if something gets in the way, blow it up. Now you, too, can join in the fun with Hudson Soft's Bomberman 64.In Bomberman 64's all-new one-player Adventure mode, marauders have set their sights on Bomberman's peaceful planet. You'll explore labyrinthine levels by dropping bombs, solving puzzles and finding hidden items. The action takes place across five brightly colored worlds: a smoldering volcano, ruined castle, icy mountain range, orbiting space station and storybook village. Find all 100 Gold Cards in the first five worlds and you can access a sixth world.To maximize your score, you'll need to finish each of the 20 levels as quickly as possible. Deadlines are tighter on the Hard difficulty setting. Despite the prevalence of incendiary devices, Bomberman 64's overhead perspective, cartoon-like graphics and bright palette gives the game the cheerful feel of Super Mario RPG. It's Bomberman 64's multiplayer mode, though, that really blows the socks off the pyrotechnicians at Power Source. In Single Battle mode, dashing about the baffling arenas and blowing each other to smithereens proves to be, well, a blast. Team Battle mode is a highly explosive version of capture-the-flag. Your goal here is to destroy the enemy team's gems while protecting your own. You can choose the number and duration of battles. You can also choose from three levels of artificial intelligence for CPU-controlled bombers. When the Ghost option is selected, your little guy will return as a wispy double of his old self after he's gone boom. Ghosts can control a normal Bomberman, but they cannot deploy bombs.You'll savor Bomberman 64's sneaky new features, including extremely high explosives and the ability to toss or kick your bombs diagonally. Other new features include the ability to pump up bombs, knock foes unconscious, grab and toss unconscious foes, and toss or kick bombs diagonally. Bomberman 64 is a blast!

Users who own Bomberman 64