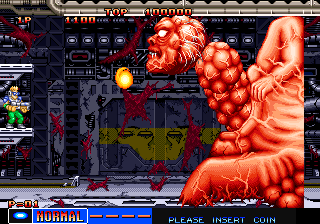 Metal Slug 2 - Super Vehicle-001-II Review by: Eirinn - 8/10
An adrenaline pumping ride from start to finish
When I found this game, I was searching for a fast and fun game, and it did not disappoint. Out of all of the Metal Slug games I've played, this one has easily been the best. It took the problems that the other installments suffered from (such as putting you in impossible to survive situations), and fixed them, while taking the good things about Metal Slug games, and making them better. For those of you who may not be familiar with the Metal Slug games, they are easily identified by the tooney graphics they employ, and the intense action that constantly fills the screen. Metal Slug games are among the most chaotic of their time, and require incredible reflexes, or many many continues to finish. You may or may not like them, but one thing's for sure: you will never find a dull moment with them, and Metal Slug 2 is no exception. This one is jam packed with explosions, gunfire, missles, grenades, and giant vehicles of mass destruction, not to mention a few other surprises that I'll save for the player to find. I could go on and on about the chaos that Metal Slug 2 offers, but let's get down to the reviewing, and see what exactly this one brings to the table.

Graphics: 10/10
Incredible.
Here we have an impressive display of animation and artwork made into Video game sprites and backgrounds. That's what I love so much about this game's graphics: they use sprites that look hand drawn, and incorporate them so beautifully. This results in incredibly smooth sprites all around, with very little -if any- pixelation. They animate very well also, with fluid movements, and also provide us with some very humorous moments. For example: have you ever wondered why these people in other games act like there's nothing strange about you respawning after they kill you? Well, SNK has too apparently, and decided to incorporate more realistic (and downright hilarious) reactions from your enemies when their boasting over killing you is interrupted and their eyes bug out as they see you drop back on the field in front of them, alive again, and out for revenge. Sometimes they will try desperately try to kill you again (but in vain, since you are granted temporary invincibility so you can exact your revenge with extreme pleasure), and sometimes they will run away scared (understanble, I would say!). Next on the list of impressive graphics shows, are the good backgrounds. I am a sucker for well designed backgrounds, since I love detail work in games, and Metal Slug 2 came through for me in this department. In fact, not only are the backgrounds well designed, some are outright gorgeous, namely the final boss fight. That background has so much action going on in it, it just feels alive, and really pulls you in. They also incorporated a layered background at points, so that one scrolls behind the other, creating a very nice effect that pulls you into the levels. The next stop on the awesome graphics tour is particle effects: the explosions here are incredible! They aren't all identical, and they look believable, and you'll get to see plenty of them, trust me. The color schemes are well done also, with a good mix of earthy and bright colors. Finally, I can't talk about the graphics here, and not mention the water-blood. When characters are shot, bombed, or sliced, a generous amount of fluid issues out of them, but it's clear like water in this particular version, instead of red. I actually really appreciated this personally, but I didn't rate it up or down because of this. It's just a heads up for you, the player.

Sound: 10/10
Incredible.
Wow, these Background tunes are great. The style is fitting for the game, and each level's tune has it's own little flavor mixed in to make it fit that level perfectly, as well as being incredible quality, and highly enjoyable. "Interesting" would probably best describe hearing the "Egyptian" style music placed over the rock tune of the first level. It doesn't sound like one solid track, but rather two tracks plying one on top of the other, which actually makes for a sweet soundtrack. I would be willing to listen to these just for the sake of listening, whether I'm playing or not (yeah, it's that good). In fact, I've actually considered downloading the tracks for this one. The sound effects were also nice, though the screams became a bit repetitive at times, but not repetitive enough to make it annoying. The explosions were very nice, and the voice overs (the talking, not grunting) were surprisingly good quality as well, and the sound of constant gunfire keeps the adrenaline pumping. All in all, Metal Slug 2 has some of the best sound I've found in an arcade game, or any game of it's time, and other than the somewhat repetitive scream sounds, I can't think of a bad thing to say about the audio in this one. So go ahead, turn the volume up loud when you play this one. I know I did.

Story: N/A
I so wanted to rate this category, instead of saying N/A, but there really is no story here, despite the amazing and moving story that the game gives you by way of cut scenes in the final boss fight. Instead of giving you a story, they just drop you in the middle of the game, and you blindly blast your way through the levels until you reach the final boss fight, and see a scene or two that explains what that boss fight is about and how it ends. Still, I can't rate the story since there isn't technically one there.

Depth: 4/10
Poor
Boy, that was a sudden drop in the ratings. Unfortunately, Metal Slug 2 earns every bit of this rating in depth. It offers no variation on the gameplay, aside from using different weapons, and there are only about five levels. On the upside though, it does offer between four and five weapons to use and vehicles to control, as well as offering around ten different enemies, four playable characters, and plenty of powerups along the way. These features are what gives Metal Slug 2 a much needed boost in the depth department, though it didn't boost it quiet enough.

Addictiveness: 8/10
Exceptional.
This is one game that I will definitely play again, because while it lacks in depth to keep pulling me in, it more than makes for it with fun and exciting gameplay, and I'm pretty sure that the majority of the people that play this will feel the same way. And while I enjoy the new updates and such that modern games offer us, there's still nothing quiet like blasting through levels and wiping out everything in sight, with ridiculous powerups, retro style. If you've ever played a game like this, then you know how addicting it can be to grab a machine gun and tear through a level, spraying dozens of bullets per second and throwing grenades, watching vehicles and buildings blowing to pieces and mowing down countless enemies. It has that certain level of Video Game violence found in arcade games, balanced out with cartoon style animation and humor, so that it's exciting, but never too real. And believe it or not, the light hearted animation actually adds to the addictiveness factor of the game as well.

Difficulty: 7/10
Difficult.
While completing this game is pretty easy (thanks to unlimited continues) my first run through took me forty-three credits, so this wasn't exactly a breeze as far as MAME is concerned, but anyone can finish it, since unlimited continues means you can't lose. The controls are also responsive and easy to learn, as are the commands they perform: jump, fire, move, and throw bombs.

Overall: 8/10
Exceptional.
Metal Slug 2 is a solid retro arcade/shooter blend that stays true to it's roots with intense action, endless explosions, exaggerated weapons, larger-than-life bosses, and odds that are stacked all but impossibly against the player. With great graphics, an equally awesome soundtrack, and action aplenty, this one is a constant thrill ride from start to finish.

So there you have it, Metal Slug 2 is definitely worth a play. As with all entries I've found in this series, Metal Slug 2 is filled with insane side scrolling action that will keep adrenaline junkie gamers coming back for more, and will certainly draw fans of arcade shooters in, and won't turn them loose anytime soon.
Graphics 10   Sound 10   Addictive 8   Depth 4   Difficulty 7