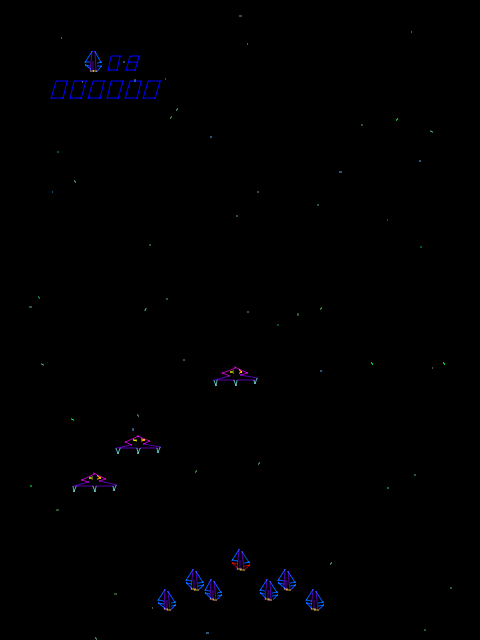 An excellent vertically scrolling shoot'em up.

The game forbids the initials 'SEX' on the high score table. If you try, it gets changed to 'H!?'.

If you beat the game in Single Character mode with Car-Pet, she says she's off to work on a great RPG and it shows a parody of the original Nintendo Famicom Dragon Quest boxart called 'Car-Pet Storys'.

In the Secret Stage, you fight the first and last boss of Razing/8ing's game "Sokyugrentai".

Medals score : As long as you catch all medals of a wave, the increasing continues up to 10,000 points per medal. If you miss one, the next wave restarts at 100 points. You can tell that the medals are increasing in value by how they start changing in appearance.

* Stage Edit : start from the game mode selection screen, highlight the game mode of your choice and press A+B simultaneously. This can also be enabled by setting a DIP switch.

* Player Select : with this mode enabled you can select one ship instead of a team. Insert a coin and press Up(x2), Down(x2), Left, Right, Left, Right, BOMB, FIRE, START. This can also be enabled with a DIP switch.

* Score Mode : to show up score calculations, start from anywhere in the game, hold the START button and press BOMB (To leave the score mode, re-enter the code).

* Special Course : at the title screen, press Up, Down, Up, Down, Left, Right, Left, Right, A, B, START. This will enable a fourth 'Boss Attack' game mode. This can also be enabled with a DIP switch.

* Garegga Option Formation Codes : the Garegga ships are unique in that their options can be set to a variety of different formations. Typically, this is done by pushing button C, just as in "Battle Garegga". However, since Batrider is 'officially' a 2-button PCB, some cabinets may not have a third button. If you're stuck playing on one of these cabs, use these "Street Fighter" moves instead :
Front : up, down, A
Back : down, up, down, A
Wide : right, down, down-right, A
Control : left, down, down-left, A
Rolling : left, down-left, down, down-right, right, A

* Ingame Commands : press these button combinations during play to customize the game's bullet patterns. Note that the START+A and START+C combinations affect only your ship, and not the enemies :
Increase your ship's firing rate : START+A
Decrease your firing rate : START+C, or Start+Up (B ver. only)
Score Display : START+B (displays points given for destroying enemies)
Change color of round bullets : START+Left
Change color of straight bullet : START+Down
Change color of destructible bullets : START+Right

* Secret Extend Items : an extend item will drop after each 1.5 million points. In addition, there are two secret methods for triggering extends :
1) Kill the Highway Stage's blue hovercraft only after it's stopped.
2) Miss 3 max bomb items.
Missing three extend items and collecting the fourth will yield a 'special extend', refilling all your empty life slots.

* Galaxy Valhallyzer : this is Gain's 'dream machine' from the "Mahou Daisakusen" games. In Batrider, you can actually play as this ship for the first time, although it's not particularly useful. To get it, you must be playing as Gain. Miss an extend item with no options on your ship, and collect the next option you see. Your ship will now transform into the the 'Galaxy Valhallyzer'. It can be difficult to reach 1.5 million points without using options, so it's easiest to just suicide to drop your options right before you hit the extend.