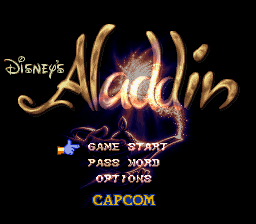 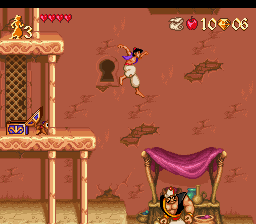 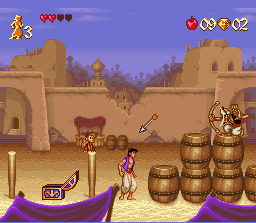 For years, Jafar, the Sultan's evil advisor has sought a magic treasure - a single lamp that holds the key to the greatest power in the world. With this goal in sight, Jafar learns that only one person in the world can claim the magic lamp from the dreaded Cave of Wonders - one whose rags hide a heart that is pure - a diamond in the rough!
Join Aladdin and his pet monkey Abu, as they race through the marketplace toward their date with destiny. Watch as Jafar tricks our hero and his friend into retrieving the lamp from the dangerous Cave of Wonders. But Aladding and Abu outwit Jafar, releading the power of a wacky blue Genie! Aladding will have the chance to spoil Jafar's devious plans and win the hand of the beautiful princess Jasmine. But it will take more than magic to make his wishes come true...

Disney as a significant monster of a machine with its immense proportions has thrown many good character animated productions at the film going public. One of the greatest successes for the Empire was Aladdin from 1992. As it should be for a modern company, emphasis is also at Disney has always been on a winning the award on all current consoles for above all small and large players. Of course this also applies to the massive hit Aladdin, which is to be discussed here for the Super Nintendo.

A nicely illustrated intro introduces you into play Aladdin, his wonderful companion Abu, Princess jasmine, and Genie. I'll save myself here decidedly retelling the story. The goal of the game is to survive it to eliminate the evil, Jafar in the final rendition and in the final classic level. Roughly based on the plot of the film, the story of intermediate images is retold in the game constantly. While the complete setting is thematically in the Oriental region. So runs one of marketplaces, explore ancient temples and jumps through the Interior of the magic lamp. As an opponent, archers, Saber oscillator and other minions of Jafar keep ago in the first place, as also his Parrot Iago. The Genie is the host of opponents by duration of bombardment with apples and swords on it jumping. Abu, following you at every turn is always on your side. Genie has unfortunately only a role playing techniques and occurs only in bonus sequences in appearance, which are based on roulette. He is also omnipresent in the inside of the lamp in many graphic elements. This level is extremely, but represents a nice change. A further nice goody is the carpet level in which you must flying avoiding obstacles on the carpet. All in all created this issue a very dense atmosphere, which is still supported by the little annoying music.

The difficulty is moderate and is defused in addition by a password system. There is of course a rule continues.

The image is pretty to look at and with very entertaining animation of the hero and the opponents of the host. Sometimes there are also quite nice scrolling background, if pass multiple levels of houses in a row. The intermediate images are beautifully drawn, pull out the console but no leg and could be measured by the technical possibilities of the Super Nintendo's spectacular.


All in all a nice Disney skip that has many beautiful approaches, especially in the graphic area where a high level of expectations remains. I
Graphics 8   Sound 9   Addictive 8   Depth 9   Story 10   Difficulty 8

Disney's Aladdin is based on the 1992 Disney animated film. For the GBA and the SNES editions development was handled by Capcom. Like other versions, the game is a side-scrolling platformer where the player controls Aladdin through locations from the movie like the city of Agrabah, the Cave of Wonders, and Jafar's palace. Some locations not appearing in the film include a trippy, candy-colored world inside the Genie's lamp and an ancient pyramid. Enemies standing in Aladdin's way include the Sultan's guards, animals and various magical creatures. They can be dispatched by jumping on top of them or by throwing apples at them. Besides jumping and throwing, another one of Aladdin's abilities consists of him pulling out a blanket and using it to slow his fall.

Besides the platform levels, the game also includes magic carpet rides as well as a bonus game played between levels: if Aladdin collects a golden scarab in a level, he can play a wheel of fortune for extra health, lives or continues.

Go to options and press L, R, Start, Select, X, Y, A, B on controller 2, exit, then hold L+R and use the D-Pad on Controller 1 Level Select

Press B when the Genie blinks during the bonus levels for one or two
extra lives.

Users who own Aladdin