Play Boxing online with Atari 2600 browser emulation for free! Boxing (A2600) game rom is loaded with features in our flash, java and rgr plugin emulators. Nothing to configure, we've done it for you!
Play Retro Games
Game Browser
Netplay Lobby
Play Your Games
Xbox One Emulator 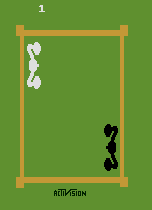 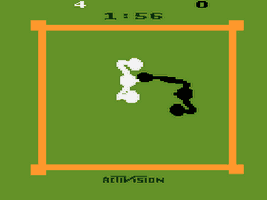 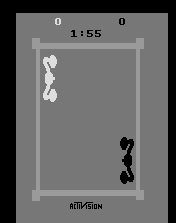 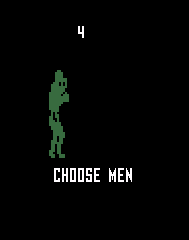 Graphics:
the graphics of boxing for the atari game, isn't too shabby, but It doesn't mean I really enjoy them either.

(Sprites: if I were to say anything the sprites of the game kind of look pretty blocky and not so well detail, If  I can say anything, They kind of look like stickmen or something in my case, because they really don't look all that well detailed. They just happen to look very blocky and pixelated, and plus with their Colors of black for the cpu, and white for the human player,  Yea It kind of looks pretty plan and basic, as if it were on a game and watch system)

(Level/areas:  The Main area is Just boring and plan.  Now I am not trying to be mean or critic this game too badly, but All I can really say, is the place looks like a poorly designed boxing ring, and everything else is a really plan gray color, why grey?  Now I understand that the colors of the atari were pretty low, but I felt they could choose at least a more decent color like green, just to make things look more pleasant and interesting. Not to mention that, the level doesn't change at all.)

Sound: The sound isn't too shabby now, but I suppose for a 2600 game it's alright, Just a bunch of bloops and boops to make some sounds, When punching you're opponent.   Nothing too bad in my case.

Overall sound rating 5 out of ten.

Addictiveness:   I really don't enjoy this game all that much, You know for a boxing game, You'd at least expect some challenge or some amount of fun within the game, but Really when playing this game, I was pretty disappointed.

Overall addictiveness gets a two out of ten pretty boring game in my opinion.

Story: N/A   no storyline in this game, skipping the rating.

Depth & difficulty:   The depth isn't bad, but like alot of games during this time, this game was basically a never ending cycle,  Difficulty: Now on to the parts and difficulty, first off you start off with practice, because you basically just punch you're foe 100 times, then it's on to vs mode were the cpu will try to actually fight, but the main problem I have with the difficulty is the ai is just cheap and really easy to beat.  The game pretty much goes on and on after you win that fight, no differences.

Put on your gloves! You're about to mix it up in the most pulse-pounding fight of your life! Listen to the THUD of those jabs and power punches. Watch your opponent reel back when you catch him with a good one. Keep bobbing and weaving - and DON'T GET PINNED AGAINST THE ROPES! It's fast and furious fun! And if you stay in training, you'll soon be a champion at BOXING by Activision!

Users who own Boxing