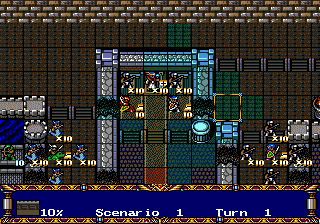 In Fire Emblem: The Sacred Stones, you must help protect the nation of Renais from the invading Grado Empire. Plan your strategy, choose your units, and then lead your soldiers in to battle. The more experience your soldiers gain, the more you can upgrade their abilities. This time, your soldiers can gain experience by fighting new monsters in the Tower of Valni.

Fire Emblem - The Sacred Stones Review by: Deadman9001 - 9.8/10
Fire Emblem: Sacred Stones
The Second  installment of the fabled Fire Emblem series to reach outside of the Japanese border, truly rocks the handheld market by storm.  One of the few Final Fantasy esq. games where the player will suffer perma death if any party member dies.  Unlike in Final Fantasy if a party member falls at any point in the game, that person is lost forever.  This feature in all Fire Emblem games is what continues to set the series apart from the rest of the Nintendo and video game library.  The series made only two trips to the consoles with Fire Emblem Path of Radiance and Radiant Dawn being released on the Gamecube and Wii respectively.  These releases followed Sacred Stones in the order release.  This game is a top view map featuring grids guiding the character movements, using RPG elements and mechanics to advance the battles along.  Cutscenes and music shine through despite a lack of voice acting.

Story: 10
One of the classic and great RPG games of the Gameboy console, Sacred Stones uses the long old tale of war to drive its story.  The many kingdoms on the continent of Magvel are driven into war, when the southern most kingdom of Grado suddenly attacks its long time ally Renais.  You play as the Princess and Prince Erika and Ephraim on a quest to discover why Grado began an unprovoked war, and to free your kingdom from its evil clutches.  Along the way the main characters meet many a friend who will valiantly give their lives to return peace to the world.  It is only after a few chapters in, that you discover the true reason your neighbor envelops all of Magvel in total war.
The twists and turns the plot line of the game puts you through are wonderfully done, and well scripted.  This game is a true testament to how well the developers of the Fire Emblem series are.

Depth: 10
With the perma-death mechanic and the many many chapters you will play in this game, the depth is tremendous.  Each character can level up and change their class to one of two or even three advanced classes once they reach level 10-20.  You must collect class changing items in order to do this, and once you've invested the effort to level the characters up, you will want to start keeping them alive, even if you have to restart the console and play the level all over again.  If that wasn't enough for you, the game also offers the ability to travel anywhere you had previously been on the map (the first time this had been used since Fire Emblem: Gaiden, the second game in the entire series), and either fight in two grinder towers (they are there simply to level up your characters) or to the various shops and armories all over.  After you have beaten the game, you will then be allowed to continue from that point and use your current team to fight through the grinder towers to the top and even unlock NPC's to play for your team.  It even features a multiplayer function, where you can challenge your friends to linked arena battles using your best fighters with their best weapons.

Difficulty: 10
While the game's controls are relatively easy to figure out, it is the constant threat that your lord, or any of your precious characters will be killed, that you will most likely have to restart the console and try again so that you can keep that character alive.  Surviving the entire game without losing one character is a difficult task, and takes a lot of careful planning and strategy to pull off.  This is what makes the game so good however, that you are forced to develop the characters and learn them.

Graphics: 10
For a game of this console, having a top down, sprite ruled screen can be a bit disappointing.  However the graphics fit the bill for the game, as each battle features cut scenes showing the attack, and very fun critical hit moves that will make the player beg for more "killer" weapons to see this happen more often.  The maps are beautifully designed and each character is beautifully colored and placed in. Even the overworld map is very well designed as well, allowing the player to be aware of what each place on the map offers.

Sound: 10
Fire Emblem is very well known for its soundtracks.  Each map uses a variety of over 100 or so songs, with the individual battles having its own sound effect based on whether or not it is the players turn, enemies turn, or allies turn.  The soundtrack is one of the top memorable things about this game, as each song at the beginning is hidden from the sound room until the player has heard it at least once.

Addictiveness: 10
There is not one time that I have found myself not wanting to play a Fire Emblem game of any kind.  While I find that Path of Radiance offers a little more than what is offered in this game (plus Path of Radiance also auto changes your class rather than forcing you to use the class changing items found in the world).  I own this game and still go back to playing it every now and then to challenge my skills, or play one of the other two games that came before it.

This game is not as good as it could be for me.  I feel that some of the added features of Path of Radiance would fit this game beautifully and make it a perfect 10/10 game.  I really enjoyed that games ability to auto level without having to find class seals, or get enough gold to aquire them, as well as the ability to customize and create your own weapon.  However this game is the better Game Boy Advanced out of the three released (only the last two GBA games for Fire Emblem were released outside of Japan, the other one was a sequel to the game simply known as Fire Emblem).  I recommend anyone looking for a challenge and wanting to test their skills start playing this game now! It is that great.
Graphics 10   Sound 10   Addictive 10   Depth 10   Story 10   Difficulty 10

Eight hundred years ago, the sacred stones were used to defeat the Demon King. Sealing his soul inside the stones, peace was brought to the continent of Magvel and five nations were built around the power of the sacred stones.

However, after 800 years of peace, the Grado Empire suddenly attacks his longtime ally Renais and a larger war threatens to break out. The player takes on the role of Prince Ephraim and his sister Princess Erika, two of the few survivors of Grado's attack, following their different paths through the story.

Gameplay in Fire Emblem: The Sacred Stones is similar to its predecessors or the Advance Wars games. The player controls several different units in tactical turn-based battles.

There are many different classes ranging from knights, thieves and archers to paladins, wyvern riders, great knights and more. As in RPGs, units receive experience points for their actions and may choose to upgrade to a different class once they reach a high enough level.

A key element in Fire Emblem's gameplay are the three different types of weapons and magic. One type of weapon or magic is always strong against one, and weak against another type.

During battles, it is also possible to visit stores to buy equipment, or houses to gain hints.

Sometimes neutral units will also participate in battle. They can be convinced to join the player's army if the right person talks to them.

Unlike most similar games, when a unit dies in battle it is impossible to revive it.

Users who own Fire Emblem - The Sacred Stones