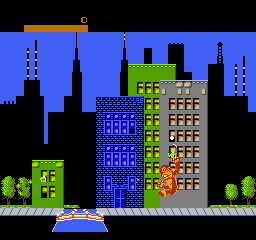 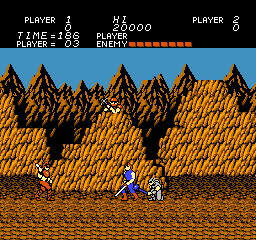 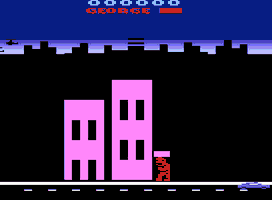 Rampage!
Back to the Future Part III

Nearly fifty years has past since Simon Belmont rescued the land from the curse of Dracula. Now, Simon's descendant Juste Belmont, must acquire the relics of Dracula to unravel the disappearance of his childhood friend Lydie. The castle's enchanting mysteries and danger await all those who dare enter.

The game itself does change one thing in the game. The final boss. In most Castlevania games, Dracula is the final boss. However, Dracula is not the final boss this time. The final boss is Dracula Wraith. Dracula Wraith is Dracula with Dracula's relics combined. He has never fought a Belmont before since this is his only appearance in this game. You should also see his final form. It's pretty much all of the relics combined as a big creature. He really isn't that hard to beat really. He's as easy as Dracula.

The controls are pretty easy to learn if you've played the other two Castlevania games on the Game Boy Advance. You can now dash back and forth without changing directions. That is called front dash. Also, when you hold down the attack button, it becomes a chain that blocks projectiles, but does little damage to the enemies.

The game now has two new sub-weapons in this game. Those two are the Holy Book and the other one, I can't remember the name for it though. The game also has spell books to it now. You can use it combined with the sub-weapons. They do more damage an they prove to be useful through out the game when you fight harder enemies. There is one powerful spell book that is the most powerful then the other ones. It summons monsters that do so much damage on the other enemies. It does take away a lot of your magic though.

The relics in the game are really useful and you need to get them so badly. One relic can make you have the super jump. It proves to be useful when you are finding one of Dracula's parts. You get two relics at the start of the game and you have to get all of the relics in order to help you defeat Dracula and to bring down the castle.

There are some items and equipment that do really cool stuff. You can even get them before you even get the relic for the certain thing you do when you get it. Like for one thing, there are these boots called infinite boots that you can jump infinite times in. You can get it before you get the Super Jump relic. Now it's time to finish this review.

Graphics-The graphics are great. The characters and enemies sprites are also great. I was hoping they would be better, but they're close enough to what I thought it would be.

Sound-The sound and music are awesome. The music fits with the stage and the boss music is pretty good.

Addicivness-I would play this game again because it's really fun and has some really good things I like about it.

Story-50 years after Simon defeated Dracula, Juste Belmont(the main character and the character you play as) has been lead to a castle by his friend Maxim. He later finds out that the castle is Dracula's Castle after seeing Death. Now he has to save his friends and take down Dracula and the castle to save all of Transylvania.

Difficulty-The game is hard, but not that hard. It has some tough enemies and tough bosses in the game.

Overall-This is one hard and fun game to play really. Has good music, the story line is perfect and it's how I want it to be.

Wrap Things Up-Castlevania Harmony of Dissonance is a hard and fun game to play. I would recommend that you would play this game. Trust me, you'll love this game so much.


This has been another starwars293 review
Thanks for reading

Castlevania: Harmony of Dissonance is the second Castlevania game to appear on the Game Boy Advance. Juste Belmont and friend Maxim are drawn to the newly resurrected Dracula's Castle in order to save their mutual friend Lydie, although it remains to be seen who will be saving whom.

The game is another Castlevania in the action/RPG style of the previous Castlevania: Symphony of the Night and Castlevania: Circle of the Moon. Juste is able to dash at will similar to Alucard, and use subweapons like the axe and holy water. By combining subweapons with magic tomes located throughout the castle he can increase both their power and their properties, such as turning the holy water into a rain that damages every monster onscreen, or turning a Bible into a holy shield that circles him. Juste can equip many kinds of armor and accessories, and he can modify his Vampire Killer whip with different tips that change its elemental property or increase its power. As an optional side quest, Juste can also find furniture and furnishings left around the castle and decorate a room with them, although there is no reward for doing so beyond a nice looking room.

After you\\\'ve beaten the game and obtained Boss Rush Mode, input the Konami Code (up up down down left right left right B A) while the Konami logo is being shown. Enter Boss Rush mode and Simon will be automatically selected.

Users who own Castlevania - Harmony of Dissonance

Comments for Castlevania - Harmony of Dissonance