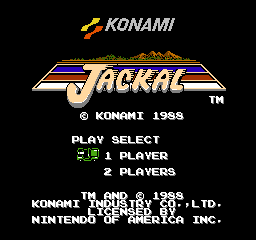 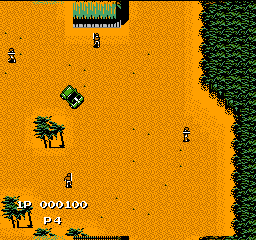 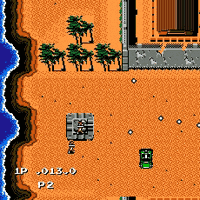 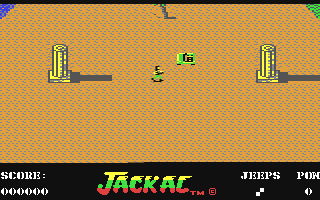 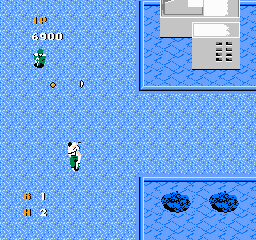 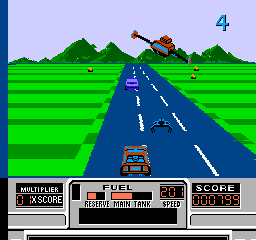 Your brothers-in-arms are hostages behind enemy lines, and you're their only hope for freedom. But the firepower you'll face to rescue them is awesome. Cannons, tanks, submarines and snipers will blast you with horrific crossfire, while jet fighters zero in from above. To defend yourself, you control the army's advanced all-terrain attack jeep, with its arsenal of guided missiles and incendiary grenades. Of course these are merely tools, and to save your countrymen you'll need more than a handful of gunpowder. You'll need a pocketful of miracles, and the ferocity of a wild Jackal!

Jackal Review by: LegolasJJH - 7.2/10
Jackal
Jackal for the NES pits you right in the middle of the most dangerous rescue operation of your life! Jackal is a top view game where you control a Jeep containing 4 men armed with a machine gun and a grenade launcher which is upgradeable. Your goal is to save your comrades from enemy buildings and then drop them off at rescue points. Jackal is a fast paced action packed game not recommended for people with slow reflexes.

The games graphics are ok to average, I feel like their is something to be desired , maybe the games sprites could have been more detailed. In some of the locations their seems to be large areas with little to no detail.

The games soundtrack is catchy, you know the games soundtrack can't be all bad if you find yourself humming the background music after playing the game , which I can say I've done with this game. The sounding of a boss battle about to begin does a good job preparing you for the intense fight. The sound effects for the guns and explosions are appropriate but could potentially been made louder or more dramatic.

The game is very fun, the controls are crisp and responsive and the pace of the game leaves you at the edge of your seat and screaming at the tv/computer screen once you die. The game contains 6 stages all with a boss at the end and after the first stage it becomes very difficult. The game can be played 2 player giving you endless fun with friends. The game also has a score system allowing you to compete for the highest score.

The story kind of seems like a cliché action movie script but these games are not played for their story. About the only plot twist I can really see in the game comes towards the end and it's a stretch as to if you would consider it a plot twist or not.

The game is long once you consider how difficult it is to get to the final stages. If you were good it wouldn't really take all to long to complete the entire game, but it would take practice for anyone to become good enough to do so. I think the greatest re-playability of the game comes in the form of playing with friends and competing for high score.

This game is very hard, and takes extremely fast reflexes (or incredible luck). I consider myself an above average gamer and I've only been able to beat the game 2 player.

I take the average of the graphics, sound , addictiveness, and depth category's to get my overall score which is 7.2. I think this is a fair scoring for the game because it is a very fun game but it has its limitations in graphics and it may be slightly hard for some people. The game is very fun for the NES though because their is not a ton of other games exactly like it. Driving a military jeep equipped to the brim with firepower appeals to any action lovers. This is another one of those games best played 2 player, but can always be enjoyed solo.
Graphics 6   Sound 8   Addictive 8   Depth 7   Story 5   Difficulty 9

The enemy army has captured too many of your forces. Being held in P.O.W. camps, these soldiers are effectively out of the war... unless some kind of rescue operation can be mounted. Heavy Forces are too slow and visible to be of any use, but perhaps something smaller and lighter may make it in where larger forces would fail. A small jeep, maybe two, crewed by about 4 people.... minimal enough not to represent too much of a loss and yet suitable enough to aid in rescue. But of course, if these brave men want to succeed AND come back alive; they'll need to fight like animals... they'll need to fight like jackals...Jackal is an overhead view jeep game for up to 2 players. The controller moves in four directions, button A fires your gernades (upgradable to bazooka) and button B your machine gun which ALWAYS fires to the top of the screen. Your mission is to locate facilities where soldiers are being held prisoner, rescue as many as possible, and escort them to a safe landing zone where they will be air transported away. After that, you'll need to fight a boss battle against the enemy to progress.

Start a two player game and press A + B at the exact moment that player two loses his last life.

Users who own Jackal