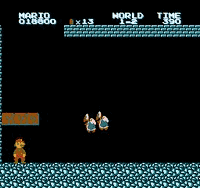 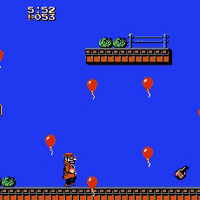 Super Mario Bros. Review by: Azul Fria - 9.5/10
When your sink is in trouble you can call them on the double.
OVERVIEW
Mushroom Kingdom was once a peaceful land where Princess Toadstool (Peach) rules over her subjects called Toads (Kinopios) with a gentle heart. As with all peaceful  settings there is always going to be an evil being to come around to take it all away. In this case, the evil King Koopa (Bowser) has kidnapped the princess in hopes of making him his unwilling bride. He then turns everyone in the Mushroom Kingdom to blocks. That is everyone except to recent outsiders named Mario Mario and Luigi Mario whom are better known as the Mario Bros. They mysteriously ended up in Mushroom Kingdom by getting sucked down the drain and now it's up to them to rescue everyone.
GRAPHICS - 10
I applaud the excellent use of backgrounds and sprites used to create a level. From a programmer's standpoint you'll notice how everything is technically the same size regardless of if its a background tile, character or enemies because everything is drawn within a bounding box. Almost everything is drawn within a 16 x 16 bounding box. The only two notable exceptions are Big Mario and Bowser who are 16 (w) x 32 (h) and 32 x 32. Guess you can add fireballs (and to an extent, the firebar) as the flames are 8 x 8. The use of colors are also something to praise as there nothing that will make your eyes bleed unlike most of the games made for the Emerson Arcadia 2001 and those were games to where glasses for. One of the many blessings is that people of the Mushroom Kingdom were only turned into blocks. If they were also turned to bricks.... Mario and Luigi would more or less be cold-blooded murders every time they break a brick that's not a hidden coin block.
SOUND - 10
With Nintendo putting in some early elbow grease during this time, the sound is top of the line. The sound comes out immediately after certain actions are made such as when you gain a power-up or kill an enemy. Matter of fact, just about every sound that was produced in this game was used within everybody's imagination whenever they did or saw something fancy or stupid. On a personal note, the invincibility theme usually comes to mind when watching a football game during a play that results in touchdown from far away but I'll talk about music in the next section since it will give a small lesson.
MUSIC - 10
Here's another interesting programming secret. The music in this game as well as it's true sequel (which never saw a release outside of Japan prior to Lost Levels) was created by taking some sound tones produced in BASIC and putting them together to create one big music score. While you may not hear notice it well with the Castle, or Underwater, it is more apparent in the Overworld and Underworld levels and the ending theme. If you are fan of Sting (singer), you may have noticed that the Underworld theme sounds so much like the title track to his Dream of the Blue Turtles. Compare the two songs and you'll see what I mean.
CONTROLS - 7
The controls are the only part of the game that hurts it. There are times when you are in a tight situation and the control fails to respond to the press of the button and thus you end up biting the dust. It doesn't hurt too bad but a split second can determine the difference between life and death especially when trying to hop over pits and you end up running off into the abyss to your doom. This leads to tremendous frustration when far into the game.
REPLAYABILITY - 10
No matter how old or young you are, this game will have you begging for more because this game was as tough as they came when it was first released and even today, some people haven't been able to beat the game without cheating. While glitches are usually frowned upon, the glitches that randomly occur in some spots make this game worth playing over and over just to find them all. The best glitch of all time is the minus world glitch where you can end up in a secret Underwater world that doesn't end. However, since this is the Famicom Disk System version, you get to play three minus worlds and beating the third world takes you back to the title screen. You can also take advantage of the same glitch by going down the middle pipe to end to go to World 5 instead of normally warping from World 4.
OVERALL - 9.5
If not for the controls, this would have earned a 10. Other than that, the game is perfectly flawless. A game that is still one for the ages even until this day.
Graphics 10   Sound 10   Addictive 10   Depth 10   Story 10   Difficulty 5

The Princess has been kidnapped by the evil Bowser, and it is up to Mario and brother Luigi to save the day.The first ever platform adventure for the Mario Brothers has the player exploring level after level, with Bowser to contend with as the end of level boss. Power-ups include the Super Mushroom, which increases Mario's size and power, the fire flower, allowing him to shoot fireballs at enemies, and the ever important starman for a short burst of invincibility.Each level includes a bonus section filled with coins plus a shortcut through the level, plenty of bad buys and obstacles to get past, and an end of level flag, in which the higher the player grabs it, the more points are awarded to them. Certain levels also include warp points, which takes the player to higher levels.

Users who own Super Mario Bros.