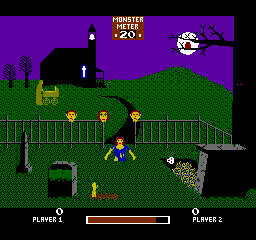 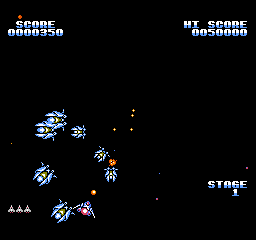 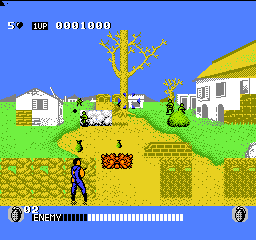 Wild Gunman Review by: Melancholy - 10/10
Gun Slinging Cowboy
Everyone has dreamed of being a gun slinging cowboy. Wild gunman, an old classic, was part of a LightGun series. I think an amazing piece to the Nintendo. The LightGun can actually tell which color is in front of the gun. Sadly, there is no LightGun for the computer, and the LightGun doesn’t work on HD screens. Try it on the Nintendo with an SD TV for the most enjoyment.

There isn’t much explained in the game, but you can tell you’re a cowboy hunting outlaws. There are three options. 1 Outlaw, 2 Outlaws, and Gang. On the outlaws, you are facing 1-2 outlaws in a gun slinging contest, exciting I would say. When you get the signal, raise your gun and fire away, the faster you shoot, the bigger reward. Miss, or run out of time, the outlaws will shoot and you will lose a life. Watching what the outlaws do when you shoot them made me laugh but later get old. The game itself is entertaining forever.

In gang mode, there are outlaws popping in and out of the windows and doors of the saloon. This is a very fast paced mode of the game. I think this part of the game is great for getting your friends and having a high score contest. The contest wouldn’t last as long as a party game, but is really fun for an hour or so. But contests are just as fun the next day.

The graphics are great for a Nintendo game because you can actually tell what everything is and see what is going on. When Mario falls in Mario Bros. it’s kinda strange. When the poncho guy falls, It’s hilarious.

The sound, I thinks is all the same on every Nintendo game, so there’s no point in rating. I just wish the sound of your gun would sound more realistic.

Controls for the menu are sketchy but one you figure out how to work it with the LightGun, it makes you feel in charge with your sick gun skills. No really I’m not kidding the menu does that. But the in game controls are simple, Pull the trigger to shoot. Aiming may be tricky but can easily be mastered. In fact, once you get it you can play outlaw with your eyes closed. Even though outlaw may seem boring being
the same controls and yet you barely move your gun, it’s a load of fun feeling like a cowboy.

I would say this is the best LightGun game ever, I own Duck Hunt, and Hogan’s Alley but never play either. Every day I break out the Nintendo, I’m bound to play Wild Gunman. It’s a Nintendo game that makes you feel like you’re there which is what everyone wants.

Overall, amazing game, I can play this for hours and hours, unlike most Nintendo games that are Garbage like those games that look like adventure, and are really board games.

As a lawman in the old west, you carry around a tin star and your NES Zapper. Your goal to to chase down outlaws and then win out over them in a fast-draw competition. Simply put, wait for your opponent to say "Fire" and then shoot first and shoot fast to win.Wild Gunman can be played against one bandit, two bandits or in Gang mode where you shoot them as they appear in the doors and windows of an old saloon.

Users who own Wild Gunman