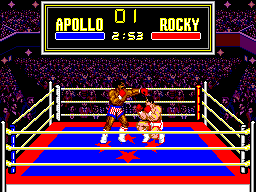 Super Punch-Out!! Review by: Totts - 9.4/10
Super Punch-Out!!
If any game deserves rave reviws then it is this one, this is possibly one of the finest boxing games on the SNES, if not ever. Its early predecessor on the NES is no slouch either and is in itself one of the finest games of its generation, an instant classic with mass appeal. The number of clones this game spawned is immence, but if its a fantasitc fun filled virtual punch up you are after then this game certainly dissapoint. For further evidence, not that you will need it, just refer yourselves to the countless times Bart can be seening â€˜bashingâ€™ his dad Homer on their home console verion of boxing which bears an uncanny resembalance to the NES version, coicidence? I think notâ€¦..

It is, however, with the SNES version, however, that this game really comes of age. From the start you are just literally itching to get your gloves on and start slugging.

This is a one player game where you get to test your boxing prowess against a number of fun and captivating opponents, it will take some skill to beat all 16, but what a thrilling ride you are in for.

Masters of this game will know that there is a distinct learning curve to this game, you have to like a real boxer would, study your opponent and look for their weak spots and exploit them, you can of course â€˜cheatâ€™, and there are countless guides you can get that provide you with the correct formula to beat each opponent, nearly blow by blow in some cases, but for me just playing the game in such a technical no frills way just reduces its appeal. This is one tough game no matter which way oyu look at it and it will take time to learn all the sequences required to beat it.

Of course it would have been nice to have had a two player mode where one could have a â€˜bashâ€™ wiht their friends mano a mano style, but given the first person â€˜behind the backâ€™ perspective of the game, I donâ€™t think the programmers thought it possible, less they split the screen and you each gained a first person perspective, which in hindsight might have been a nice feature and added to the longetivity of the game. Although it does possess a time attack mode that records the fatest knockouts for each opponent which gives the game more deapth in addition to its rapidly increasing level of difficulty.

The grapghics are stimulating, using a good spread of the SNES colours and shading, including the use of tranparancy, being both bright and captivating. The sound is superb, with a pleasing use of a synthesized voice to act as compare to your bouts.

I still find myself drawn to this game again and again, despite my knowlede of how to beat each opponent, this is because you have to think and look for the opportunities to beat them, this makes you have to think and have gret timing, rather than bash at the keys mercillesly. Even when you have mastered this game you will need rapid repsonses each time to beat it again.

Overall this game, therefore, makes a sincere attempt to take home console boxing to the next level, a carnival thrill ride of a game that certainly deserves its place in the collection of all SNES owners and certainly ones who like sports and fighting games. It has a pleasing level of difficulty and its â€˜time attackâ€™mode which distinclty adds to its replayability.

Arguable you could say on nostalgia alone, the NES version is â€˜betterâ€™, and had a much larger influence and audience too for that matter, but this game should not be ignored for taking the original to the next level, and that is why you should play this version and give it a chance to gain its place in retro-game history, for one reason alone, despite all the technological innovations of current games and the coming of 3d, the transparency aspect of the graphics still sends shivers up and down my spine and due to the increased depth and perspective of this game and varied music, this game is certainly one of the best.

Your dreams are finally going to come true! All the years of training...all for that day where you'd finally step into the ring, amidst the roar of the excited crowd, to square off against the best of the best...you tighten your fist and hear your gloves tighten with them...you take a step foward...the door opens before you...and the boxing ring beckons your name!16 world champs are here, with the same dream as you: to win the WVBA Championship! Welcome to the world of boxing, kid! Give 'em an uppercut or two for your fans!

Sound Test:
When the Nintendo logo appears, hold the L+R buttons on Controller 2. Listen to the sound effects and music with Controller 1.

Unlockable Special circuit:
Have a 4-0 score on the Minor, Major and World Circuits.

Users who own Super Punch-Out!!