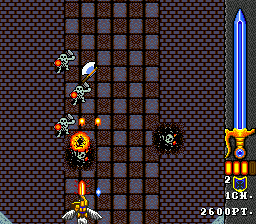 Back in day (I may sound repetitive by talking about the "old days" and all that... But it's necessary on the most part of the cases.) Konami used to be known as one of the kings of the Arcade games. Just remember, who hasn't played one of their 4 players Beat' em ups? The Simpsons, Teenage Mutant Ninja Turtles, Bucky O Hare, etc... All of these were good and had a great quality. However, Let's not forget about their shooter (or "war") games. Contra, Super Contra, Gang Busters... Like the beat'em ups, great and amazing games... But, what if we tried to fuse both? The result is "Sunset Riders" made in 1991 for the Arcade. And... guess what? The game was a big success. There were two ports: For the SNES and the Sega Genesis... Both very different. Many people prefer the SNES version for being more similar to the Arcade, but, what about the Genesis/Megadrive port? Was it good? Well, if you really want to know. Then keep reading the review.

Story: Two bounty hunters (named Billy and Cormano) have the mission of eliminate the most wanted outlaws of the West, with the objective of getting the rewards that are given for them. As well, we must help the heroes on their mission. (As you see, a typical story of the Old West.) (6/10)

Graphics: This game counts with great graphics, however, the bad thing about these... Is that these aren't close to the quality of the Arcade. That shouldn't be a problem though. The Sprites of the Characters look well, I'd wish I could say the same about the Backgrounds. These look kinda empty, and with a lack of bright colors. (7/10)

Sound: As well, the music sounds pretty different... But, that's okay, since the Genesis had a different sound chip, it's forgivable. However, at least it doesn't lack of the emotion and energy that the soundtrack of the original version had. SFX, is totally different also. But that shouldn't bother you. (7/10)

Addictiveness: Maybe we could point a difference here. Unlike the original title, this port is less addictive than it. Maybe it's because the game is pretty short, or because it's easy compared with the Arcade. One of these is the main reason... However, it can still hook you, but not much as the other ports. (6/10)

Depth: As I said, it's a kinda short game... But that doesn't decrease the variety that the game has. This is how you play: As in any platformer game, you can make your character jump, you can also move it to the left or right. (You can also slide by pressing down+left/right and jump)This port counts with two shoot buttons: While "B" lets you move and shoot at the same time, "A" only lets you aim... You can't move while pressing it. Our Characters can shoot in 8 directions, they also can jump to upper places (By pressing up and jump, you can jump back to the ground by pressing down and jump) Every stage is divided into two parts, in the 2nd. Part you face the boss. Every boss has it's own moves and abilities. If you finish with it, you'll get the reward (if you're playing with a friend, the reward is given to the player who deal more damage to the boss). There are also bonus stages, to enter to the same, you must grab the star that a certain enemy drops... Simple as it sounds. (6/10)

Difficulty: Not very high... The game is still hard, but (once again) Not as the original version. The last two stages can be harder without practice, but these still can be beaten with any problems after a few tries. (7/10)

Even if the SNES port was more accurate, the Genesis/Megadrive port is also pretty good. It's short and less challenging, that's true... But it's still a decent game to pass the time... Just give it a chance and you'll see.

You're a brave bounty hunter pursuing outlaw scum like Simon Greedwell, Paco Loco, and Chief Scalpen. Each bad guy has a big reward on his head. And they're helped by hordes of bandits, gunslingers and horse thieves, so pack loads of lead. Track those rotten skunks through an Indian village, on a steaming locomotive, and down the mean streets of lawless Reechforem Gulch. Occasionally, dynamite is at your disposal, as well as weapon power-ups. But cattle stampedes and sneaky traps could end your adventure in a cloud of dust. Oh, and be sure to carry ointment for your saddle sores because you'll ride horseback in a galloping bonus stage filled with handy items. Ultimately, you must make villainous Sir Richard Rose eat sagebrush. Do so and you'll have lots of money and the townsfolk kissing your boots.

Users who own Sunset Riders