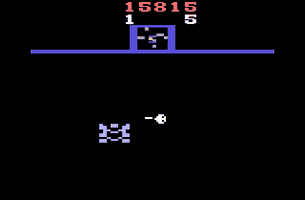 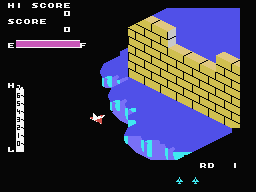 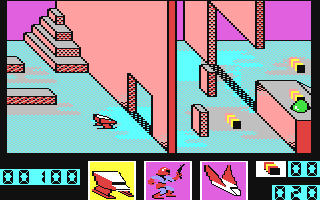 Star Wars - Return of the Jedi - Death Star Battle Review by: Redrunelord - 6.2/10
Star Wars - Return of the Jedi Death Star Battle
There is absolutely no debate about the impact that Star wars had upon the general populace when the first film, A New Hope, was released in 1977. The films are still extensively analysed for every single aspect, and the populace has taken the films to heart. One example of such is that "Jedi" was voted the fourth largest religion in England during a census. Whether one likes the films or not can not argue that they were rather popular, and it made sense that such a large number of Star Wars merchandise would be released to cash in on the films, including a plethora of video games for the Atari2600.

The Atari2600's biggest claim to fame, asides from being among the ancestors of home gaming, is that the console is well known as being saturated with space games. So much that it takes a lot for games to vary from one another. Thus, there are a large number of similar games broke into sub-categories and thus they blend together in a homogeneous library. Does Star wars - Return of the Jedi Death Star Battle blend in with the masses or is it truly one in a million?

This game puts the player in the role of Han Solo's personal ship the Millennium Falcon going directly against the Empire's Death Star. Normally a lopsided battle, the game shows two points in destroying the death star: getting past the force fields, and attempting to launch a laser or proton torpedo into the Death Star's core. As a result, it could be argued that there are two stages with two different objectives and two slightly different forms of game play. The player would use the joystick (or keyboard) to navigate across the screen and use the one button to fire. In the first level, the player would be on the bottom side of the screen waiting for a hole to appear in a shield that appears in the middle of the screen. When the hole appears, the player has to go into it: trying to do so otherwise loses a life. In the second phase the player shoots at the Death Star and destroys a pixel for each hit. The eventual goal is to hit a glowing block which well set off a chain reaction. When the reaction begins, it will launch debris at the ship where the player has to avoid. All the while, TIE fighters are trying to destroy the Millennium Falcon. When the Death Star is defeated, rinse and repeat until all lives are exhausted or when the gamer simply can not continue anymore.

Visually, the game is better than a number of other Atari2600 games set in space, making the game unremarkable in that regard. The animation itself is good, and the sprites are unusually clear for the system's technical limitations. However, there is a major issue with the graphics that transcends into the game play itself: depth perception. It is difficult to gauge how far the player is from anything due to a relatively transparent shot. It can cost a lot of lives when it is unclear how close the player is to the shield...which brings up another issue that will be discussed a bit later. The sound effects are fantastic, but there is one huge drawback: where is the soundtrack? Jedi Arena managed to get a good rendition of the main theme, and good music in general, so what stopped this game? Otherwise, if someone enjoys the Atari sound styling, then this game should be fine.

The story-line is virtually non-existent if someone was to play this game blind. Manuals and the Internet confirms that the game took liberties with the end of the sixth movie, Return of the Jedi, to fit. In some regards, it would seem that the developer(s) had a half finished game and was told by their employers that they had to finish a Star Wars game to tie in with the film release, so they simply changed some aspects to meet the deadline adequately. The story is only there enough to read as the player is waiting for the game to load, and is by no means meant to try and please the average Star Wars fan.

The game play uses an asteroids style of movement, which has its advantages and disadvantages. The main advantage is that it allows for the freedom in motion a vertical shooter may not offer, but that depends purely on the game's fundamental design. The major disadvantage is that the ship is somewhat sluggish compared to if it was in a single plane of game-play rather than relative freedom. This is one of those games that benefited from emulation in that the keyboard and space bar works phenomenally for this type of game. The bottom line is execution, and that is where this game falls short. The game just can not perform what it set out to do, which in itself is a vague objective. The game seemed to be going almost as much for stylistic appeal as actual free game play, and that is where the single biggest issue comes into effect;

In the first phase of each level, the top half of the screen is occupied by an image of the death star. The shield takes up a portion of the screen and the player is restricted to the bottom third to quarter to actually move around and play in. Considering the way the game plays like asteroids, this is very restrictive and frustrating to try and get anywhere, especially with the fact that the shield destroys the Millennium Falcon indiscriminately. Phase two is less restrictive, but it still forces the player to hug the bottom of the screen which just does not work particularly well for a free motion game. In trying to give stylistic appeal and add that element of Star wars, it brings the entire experience down.

With that said, is this a horrible game? Its not good by any means but it is playable. The general recommended Star Wars game for the Atari2600 is The Empire Strikes back which, while taking a more conventional approach, was better executed in what it was trying to do. As far as space based games on the system, this game easily can be buried among the masses. Its not recommended unless the player is genuinely curious and played some of the known high tier games already. It is certainly better than a lot of games on the system like Pacman or Jedi Arena, so in that regard it isn't a complete waste of finances or Vizzed to pick up.
Graphics 7   Sound 7   Addictive 3   Depth 3   Story 3   Difficulty 5

The arcade game from Atari based on the third Star Wars movie features three action sequences inspired by the film. First, you control Princess Leia on a speeder bike racing through the forests on Endor. You have to evade trees and deal with enemy troopers by shooting at them or luring them into Ewok traps.In the second sequence, you control Chewbacca who has captured an Imperial AT-ST Walker, evading tree traps and shooting at enemy walkers. In this sequence, the perspective sometimes switches to the Millennium Falcon which you must guide through a fleet of enemy Star Destroyers and TIE Fighters.In the final sequence, the Millennium Falcon enters the Death Star and has to make its way to the reactor, surviving more TIE Fighters and laser turrets. Once the reactor is destroyed, you have to get out again before the explosion engulfs the ship.After the Death Star has been destroyed, the game restarts at the first sequence, but with a higher difficulty.