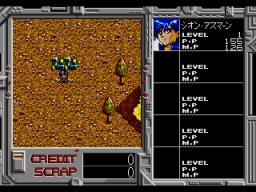 Star Strike Review by: thephantombrain - 7.7/10
They want to eat our brains!!!
This game will make you question your sanity. You might laugh, you might curse and you may even go catatonic. Star Strike was one of the last games that was developed for the Sega Mega CD console in 1994 but it was not released. Six years later it was purchased by a company called Good Deal Games, finished and released to appeal to retro gamers. (Hey, that's me!!)

Trace is the main characters name and he is a rookie star fighter pilot from earth. The earth fleet is defending humankind from the invasion of the Protoids somewhere in the vastness of our galaxy. These Protoid creatures regard humans as an excellent source of protein and our brains are even considered a delicacy. Upon arrival to the front lines, Admiral Rakin assigns Trace to Blue Fighter Wing under the command of Captain Raimer. Trace is also introduced to Head Mechanic Terry York and the other pilots in his squadron named Cosmo, Snoopy and Tara. [spoiler]Tara is hot![/spoiler] (Also, fans of the television show Warehouse 13 might recognize the actor playing Snoopy as Eddie McClintock.) When the squad is sent on a mission, space travel is accomplished by piloting through a device called the MLR or Magnetic Launch Ring. The MLR accelerates the ship to 12 times the speed of light. With all the details and supporting characters that are put into the story, I'm giving it a 10.

The graphics are FMV or Full Motion Video and were filmed by a production company named Stargate Entertainment. It looks like they had a pretty decent budget to work with. All of the space sequences are done with miniatures that are well detailed. There are too many sets for me to count but I particularly like the interior of the fighter cockpit. The pyrotechnics are believable. However, the Protoid actors are wearing sculpted masks and gloves which gives the game a B-movie feel so I'm deducting a point. Also, I think the sequences where the ship is going to and traveling in light speed are computer generated which means that the Protoids could have been computer generated too. I'm deducting a point for missed opportunity. That leaves the graphics rating at an 8.

Either a company or a person called Mars Laser is responsible for the sound in this forgotten game. The musical score is movie quality and only adds to the overall enjoyment of the story. All sound effects are realistic. My only complaint is that some of the various sound bytes during the battle cut scenes are so recycled that I began to become annoyed by them. I'm deducting a point for this annoyance. Star Strike's professional sound earns it a 9 on the report card.

I truly believe that this shooter has nothing to do with skill and everything to do with luck. When Trace's ship is traveling at light speed, for some reason a lot of asteroids are in the way and must be destroyed. This would be okay except that everything is moving so fast at 12 times the speed of light that I was forced to wiggle the cross hairs all around the screen while firing the blasters constantly. There was no time to aim. The same thing is true during the battles with the Protoid fighters. If I took the time to aim and fire I was dead. The D-pad wiggling had a better success rate, but honestly it's just a matter of time before the luck runs out. There is also a pilot eject feature when Trace's fighter gets hit that must be mentioned. I can't figure out how it works but it's obviously an option. There is no button/D-pad combination seems to trigger the escape. All that in combination with the fact that Trace only has 1 life and no continues makes the difficulty rating shoot up to number 10.

The addictiveness of Star Strike was high early on but as I got more minutes on the game clock, the luck factor began to kill it. I really want to know how the story progresses and ends but since I don't feel like skill or technique determine the outcome of battles, I think I'm done playing. This is the part where I question my sanity. My definition of insane is doing something over and over again expecting different results. I might be insane, because I'm considering playing it again right now to see if I might get lucky! I'm going with a 5 for the addiction because I'm torn.

Based on the 3 missions that I was fortunate enough to see, there is probably some variety to the depth of where this story line goes. There were different locations to fight at and other targets besides Protoid fighters. Unfortunately, because I don't feel like I'll ever see the rest of the game, I'm dropping the score in this category to 5 in an attempt to remain neutral. I'm also going to remove a point because of the controls. Not only is there the aiming problem but the only button that did anything during the entire game was the "A " button The lack of the use of all but one button kills a point, thus bringing the total depth score to a 4.

All of my sub-scores total up to an overall score of 7.7 which I think is fair. This attempt at a FMV shooter had the potential to be a perfect 10, but was ultimately crippled by the lack of basic gaming mechanics. Since the game wasn't actually released for 6 years following it's initial design, maybe there was very little play testing done. I'm certain that had the development team got some feedback from players they would have been tempted to correct the overwhelming game play problems. I don't know if I'll ever play Star Strike again but I urge any reader to try and see if they can beat it. If the urge is there, they only need ask themselves "Do I feel lucky today?"
Graphics 8   Sound 9   Addictive 5   Depth 4   Story 10   Difficulty 10

Travel to the furthest reaches of the galaxy to destroy the brain eating Protoid invaders.

Users who own Star Strike