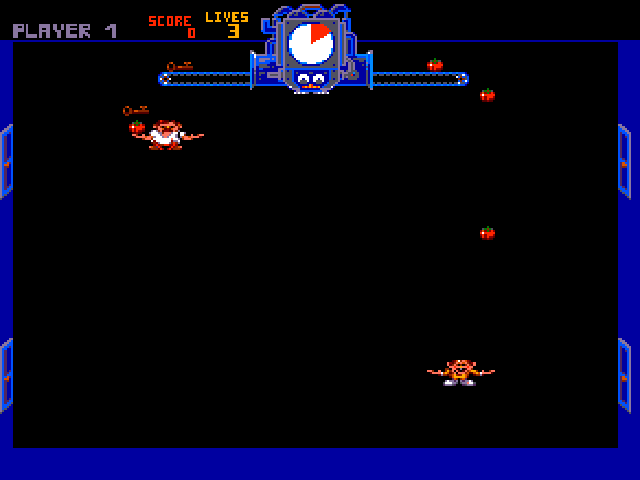 Smash T.V. (rev 8.00) Review by: SuperCrash64 - 9.6/10
I Buy this game for a dollar or quarter
Alright this is smash Tv . I Am surprised  there was no reviews of this instant classic   Back in The Day this game probably Made Williams and The Arcade Boat loads of Money and leaving tears of Joy all the way to the bank lol. First off I will give some tips that I think would be helpful.

Another main thing you will need Is The power ups . Because  While the standard shot works and kills people it ant very helpful against Like the 50 people coming at you at once. And Plus you will Need The more Powerful Guns for The Bosses.

Graphics Taking a look at this Classic by Williams and also on Midway  Arcade classics Its good old Classic fashioned 2d All Stages Have a good amount of Detail and Enemies Trust me  This game its gonna have A military of Enemies coming at you in each level. Sprites for The Most Part are nicely done as well They have a nice solider look and feel to them which works great for the games style Rather then just looking like some random person The Bosses are also done well too I'm gonna describe them in words.  Mutoid Man A crazy Robot machine like human .Scar face Happens To look like The Face Of Shriek at least to me . Die Co bros  Pretty much 2 Cobra's that are known of another form of snakes  that are huge . Evil Mc Pretty Much  A harder Version of Mutoid Man  But with the appearance of The Game host .Once you beat him he has a lot  of presents that increase your score,  . Graphics gets a 10  They look really nice  and Bosses also stages look great in this 90's game

Sound Most sound effects are that of The  Crowd and you Shooting the Heck out of The Enemies and As well The host speech. Even with that said it was pretty advanced for the time because No early arcade game like this 1 had voice samples .Soundtrack I like how Dark and Creepy it sounds  It goes perfectly With the Dark style of Graphics this game has  A great amount of bass to kick up the music and keep it fresh. Sound gets a 10 its the main part of voice samples That made it pretty advance considering no other game had this at the time  And the Soundtrack Fits perfect with this Style of game

Addictiveness This is why I said This game made Williams  Boat loads of money and left Tears of Joy going to the bank lol . Because This Had 50 Enemies that were very fast and made you look like a slow poke. It was fast quickness And Challenge of The Enemies Bosses and Neat Power ups that made this game Fun to Play back in The Day . Addictiveness gets a 9 for the reason said above

Story Explained in plot I will rate it a 8 because it already clears what your supposed to do in the game.

Depth Now you think possibly Shooters Were only Like four levels long and not a whole lot of enemies were there. The 4 levels were the right case in the game. But the Enemies in case was not . Cause They Went And Pushed the limit of  enemies in this game Because their are Like 150 enemies or less in Each Route with their speedy quickness .Depth gets a 7

Difficulty  This is a Really hard Game do to The Many Enemies  Coming and Hitting you at once Because your are slow from the beginning  the enemies are fast. Even with A speed shoe power up  Because you will never now Which Direction they will come out of.  And not to mention You can die like in 30 seconds in this game Also That The Bosses are pretty hard themselves. Controls work good with a Keyboard But in A game Like This I would really Recommend a Game pad Because this is 1 of The games that requires Precession Moving .And not to mention a Keyboard just does not ideal for this type of game. Considering The Actual Arcade Cabinet Made you use two Joysticks 1 for moving 2  for fire .So that's why I recommend a game pad for this type of game. Difficulty gets a 8

Overall Even with the insane hard difficulty That made this game a great classic That Made The arcades  Boat loads of money. Like in The Game  Williams Must had Enjoyed their wealth of Quarters from people getting into this game. Also various home ports such as nes snes Genesis Amiga And other systems Got a release of this great classic.Overall a 9,6

The year is 1999. Television has adapted to the more violent nature of man. The most popular form of television remains the game show. One show in particular has dominated the ratings. That show is SMASH TV. The most violent game show of all time. Two lucky contestants compete for cash and prizes. Each contestant is armed with an assortment of powerful weapons and sent into a closed arena. The action takes place in front of a studio audience and is broadcast live via satellite around the world. Be prepared. The future is now. You are the next lucky contestant!

The first series of cabinet was released with 19-inch monitors while the more common second series was fitted with 25-inch monitors.

A superb sequel to 1982's legendary single screen shoot-em-up, "Robotron - 2084". The Classic Robotron game-play is enhanced further with the addition of power-ups and imaginative and challenging end-of-level bosses. The two-player game introduced a very high level of competitiveness as both players try to beat each other to the power-ups, prizes and keys.

The game seems to be based, at least in part, on the sci-fi action movie, 'The Running Man', starring Arnold Schwarzenegger. This movie itself was based on a book of the same name by Stephen King (under the pseudonym 'Richard Bachman').

One of Smash TV's more memorable elements was the game show host; at random intervals, a garishly suited, grinning host would pop up and enthusiastically announce such memorable sound-bites as, 'Total carnage! I love it!', 'I'll buy that for a dollar!' (taken from the 1987 movie Robocop), 'I love it!', 'Big money! Big prizes! I love it!'.

A Smash T.V. sequel was planned, but the project never got past the planning stage and nothing more was heard of it. While Smash TV has yet to see a fully-fledged sequel, it WAS followed by a semi-sequel in the form of 'Total Carnage'; a military-themed scrolling shoot-em-up which was housed in a cabinet very similar to that of Smash T.V.s and shared the same dual joystick controls. Upon completion of Total Carnage's incredibly difficult first level, a message screen appeared stating that "all Smash T.V. players should quit and flee from this machine" before Total Carnage's already high difficulty level increased further. A solid follow-up to an already challenging game.

On the 2005 video game "Grand Theft Auto - Liberty City Stories", there is a side-mission called 'Slash TV', which parodies this game, where the player's character is surrounded by enemies, and is awarded cash for eliminating waves of them. The camera angle changes from the game's traditional third-person to a slightly angled overhead view so it looks like the original.

* Difficulty : the game is known to adjust its difficulty by the daily high score list. If the high scores are too high, making the game too hard, just reset the machine

* When playing with 2 people, if one player finishes the level near an exit, the other will 'walk through the wall' to the next room. Can be useful on some levels.