Play Frogs and Flies online with Atari 2600 browser emulation for free! Frogs and Flies (A2600) game rom is loaded with features in our flash, java and rgr plugin emulators. Nothing to configure, we've done it for you!
Play Retro Games
Game Browser
Netplay Lobby
Play Your Games
Xbox One Emulator 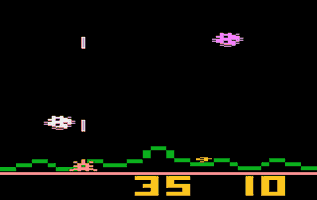 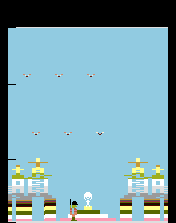 X Frogs and Flies
This game doesn't have any screenshots

Videos of Frogs and Flies Gameplay

Frogs and Flies Review by: Eirinn - 8/10
Step on up to the lily pads
Frogs and Flies is a simple, straight forward head to head challenge between the player (who controls the brown frog) and the computer (who controls the red frog), to see who can catch the most flies in about three and a half minutes. You use a directional button to hop from lily pad to lily pad (there are two pads) and press a button to stick your tongue out to try and catch flies while airborn. While this may sound boring when compared to the games we have available today, frogs and flies, as simple as it may be, actually manages to hold it's own in both the fun and addictiveness departments, even against more modern games. After finding this game recently, I was actually rather surprised at it's great quality, as I'd always viewed the Atari 2600 system as having inferior games, and assumed it was because of system limitations. Even the more legendary titles like Space Invaders, and Pac-Man never held my attention, and surely if those games weren't all that entertaining, then no game on this system would be. So when a friend suggested I try Frogs and Flies, I was expecting a mediocre game at best, imagine my surprise then, when I found out it was such a gem of the retro game world. So what exactly is it that makes Frogs and Flies so special? Let's see what the ratings have to say for it.

Graphics: 10/10
Incredible.
For the first time ever, I was "wowed" by the graphics of an Atari 2600 game. I was blown away when I fired this one up, because it pulled some things off that, to my knowledge, no other game on this console ever did. The still shots of this game could never do it justice. The color assortment for an Atari 2600 game is very good, and the frogs, trees, and lily pads are very well done for a game of it's time. Even the frogs' tongues are colored differently than their bodies. Small detail, but it makes a big difference in a game this size. The big surprise? There's a day/night cycle. That's right, when the game starts, it's Morning, and after about thirty seconds, the "lighting" changes, indicating a transition to the next phase of the day. There are seven different phases, with the last one being night time. Each cycle lasts between twenty and forty seconds, and after the night time period, the frogs hop off of the screen, and a golden bug (fly, or possibly a light bug) flies by along with the words "The End". A Day/Night cycle in an Atari 2600 game, I found incredible to say the least. It gives the game a very charming feel, and pulls the player into the experience, far better than simple unchanging scenery would. This may sound simple to modern gamers, but consider the system limitations, along with the fact that these were some of the earliest games, leaving the developers with little to no history to work with when developing a new game.

Sound: 6/10
Good.
Yeah, I may be a little lenient here, but it had about what I would expect from an Atari 2600 game. It has no background music or opening jingle, and only four or five sound effects, but what more do you expect from classic 2600 games? There are some games out there with a wider range of sound effects, and even some with BGM, but those would be more of an exception to the rule, than the "norm". What pushed me to give this game a bump up from five to six, was the cricket sound that plays when the game ends. It's a nice touch, and actually pretty clear for a 2600 game. I wanted to rate this higher, but it would probably be my partiality talking more than anything.

Story: N/A
No story here, as usual with games from this time and on this console. Two frogs are hungry and want to eat all of the flies before the other guy can. The end. Simple enough of a concept, and straight to the point.

Depth: 6/10
Good.
Yeah, hopping back and forth between lily pads and catching flies isn't all that deep, but there's more to it than that. This is a head-to-head competition with the computer to get the most points (each fly is worth two points), rather than just the typical "you versus the world" type approach to games that most Atari 2600 games provided us with. Also the ability to track your progress via score, allows for highscore competitions with a friend. And while the computer likely will not present any challenge to you after the first game or two, it will still impede your progress when going for a highscore, by stealing a fly just before you manage to get it. And yes, I rated the depth up for the day/night cycle. All in all, this game is above average in depth, but not as much as was possible for a 2600 game. Still, above average is a good thing.

Addictiveness: 10/10
Incredible.
Simple or not, I can't get enough of this game. I just keep going back to it, trying to get a higher score than last time. In fact, I've played this game a few times while writing this review, and once I finish the review, I plan to play it again. In a day when games are increasingly complex and in depth (which is a good thing), this is a welcome escape when you want a gaming fix with a simple game from simpler times. Frogs and Flies has become my fallback game when I'm looking for a simple yet fun game to unwind with, and I don't doubt that it will be the same for many of those who play it.

Difficulty: 1/10
Cakewalk.
This is probably the easiest game I've ever played that you can actually lose at. You can lose, but it isn't likely that you will, and if you do, you probably won't lose more than once. The only challenge is timing your jump and when to strike your tounge at a fly. The flies actually follow various patterns, keeping it mixed up, and sometimes they even turn back and fly away from you. But there really is no challenge to speak of. Still, due to the simple yet fun gameplay, and the score counter allowing you to go for personal bests (though there is no highscore table) this game remains addictive and entertaining, even without a challenge from your foe.

Overall: 8/10
Exceptional.
"Professional" rating speaking here. I personally would give this one a nine, but I cannot justify that rating on a review, given all of the pros and cons of the game. But in any case, this game is recommended, personally and "professionally". It has a lot to offer for a game on the 2600, and is likely to keep fans of mini-games coming back to it for quite some time.

To sum it all up, this game is a classic, and is more than worth your time and Viz. It's much better than the name might suggest, and far above the average Atari 2600 game. I highly recommend this one to anyone who is looking for a short and simple game, that manages to deliver plenty of fun while keeping it quick. And while this is what we would consider a mini-game by today's standards, it is still a great game, and it is, in my opinion, the greatest game on the Atari 2600. At the very least, it's one of the greats, and deserves no less recognition than the "giants" of the console, such as the aforementioned Space Invaders or Pac-Man. Frogs and Flies is a timeless classic, that every fan of games of it's time, or mini-games, should try, and it's definitely a must play of the Atari 2600 library. If you're looking for a quick round of simple gaming fun, step on up to the lily pads, my friend. The flies, and red, await.
Graphics 10   Sound 6   Addictive 10   Depth 6   Difficulty 1

Frogs and Flies Guides and Walkthroughs

Users who own Frogs and Flies

Comments for Frogs and Flies