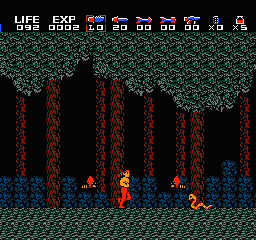 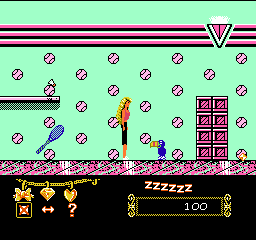 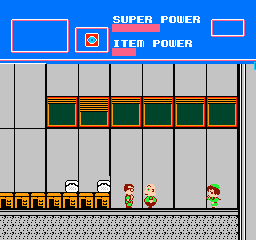 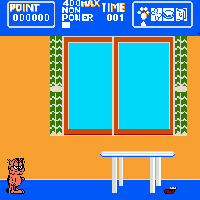 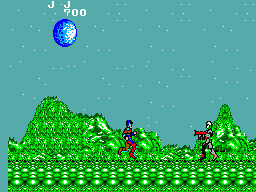 Bram Stoker's Dracula goes straight for the jugular with spine-chilling action on multiple levels that are divided into day and night. Plunge deep into the ultimate interactive movie complete with great graphics and sound that bring to life the cold, dark dungeons of Castle Dracula, the brutal Transylvanian countryside, and eerie 19th century London. As the sun sets, the evil Prince of Darkness rises and attacks as a bat, a vicious wolf, even an old man. But make no mistake, he must be stopped!

Bram Stoker's Dracula Review by: NovemberJoy - 5.5/10
Actually not that bad, but not good, due to all the flaws
So, here we have a game which has a bad rap because the Angry Video Game Nerd did it, though the game itself has some quality to it. But, there's still a lot of flaws to it.

Graphics - They do their job
Really, this game fits the standards of a 1993 NES game. Now, exactly why they're making an NES game in 1993 is beyond me, but this game looks the part. The animation's smooth, the sprites are detailed, and the backgrounds are great as well. The worst part about the graphics is that, occasionally, it can be difficult to tell if you can drop down from a platform or not. I ended up getting stuck on a level because you have to drop down from a platform, but it didn't look like you could.

Music/Sound - 8 bits of jumbled sounds
Some of the music is well-made, and fits very well with the atmosphere, and some of the music is just a bunch of random bleeps and bloops slapped together, it depends on what level you're on. The sound effects are typical NES quality, so no problems there...

Gameplay - It's a secret to everyone
As I said earlier, this game gets a bad rap because AVGN looked at it. Well, let's see just how bad it actually is.

The gameplay is your standard platformer, simply work your way to the end of the level in a time limit without getting killed. Of course, you pick up powerups along the way, light lanterns that serve as checkpoints, and everything you'd expect.

Now, what you wouldn't expect is that this game seems to have a thing for secret passages, because they're all over the place. These secret passages usually have this guy who doesn't hurt you by touch, and plays a music track when you get near him, along with ? blocks(Bet you wouldn't guess where THOSE are from) that contain 1-Ups(which look suspiciously similar to the 1-Ups in Kirby's Adventure. Wait, these games were developed in the same year, too! Now, which game took from the other? I'm not sure.), what look like voodoo dolls of the main character for continues, along with coins and diamonds for scoring points, orange clocks that add 20 seconds to the timer, and weapons. What's worse is that ALL of the 1-Ups(except for one, and that one is easily missable or made unreachable), ALL of the continues, and most of the diamonds and orange clocks are in these secret passages. In fact, during the last level of the game, you have to find secret passages, because a vital switch is inside one of them, along with the final boss being hidden by one. No, really, these game developers HID THE FINAL BOSS. That's a dirty, despicable trick if I've seen one.

There's a unique feature to this game, in that during the daytime levels, the longer you take, the more enemies and obstacles there are to deal with. Also, whatever time you have left at the end of the daytime level is added to the time you have for the nighttime level. The problem with this is that rushing is punished because you'll take a lot of damage, since the game doesn't slouch on having a lot of enemies, and taking your time is punished because of the time limit gimmick I just mentioned. So, your choices are being punished or being punished.

The game is difficult, but it's mainly cheap/artificial difficulty, like a cheap product made in China. For example, there's these ghosts that just love popping up RIGHT in front of you, so you don't have time to dodge them. Occasionally, even with the fastest possible human reflexes, some of these ghosts would STILL require you to know that they're coming, because they're in a position where you will not have enough time to hit them unless you prepare in advance. There's also these hands coming out of the walls, that blend in with the background and also pop up right in front of you just like the ghosts do. In other words, you basically have to memorize the level beforehand if you want to get through, especially on Hard difficulty(which I played on, since I want to be considered to be a good gamer). As well, there's actual moments that might require help to get through, like this time where you're supposed to ground-slam a platform to make it move. You have no hints to this, and no platform up to this point requires you to ground-slam it. I just figured it out by messing around and ground-slamming it, and then it started moving.

The difference between difficulty levels in this game is that powerups are watered down on higher difficulties(less ammunition for weapons, less health from hearts, etc), and...that's pretty much it. I couldn't notice much difference in the amount of health bosses had in each difficulty level, and nothing else really seemed to be changed. Except for one thing:The game cuts you off after Scene 2 on Easy, with the text "DRACULA IS DEAD...OR IS HE? TRY ON A HIGHER DIFFICULTY LEVEL". To my knowledge, you can play the entire game on Medium, but I'm not gonna do that, I'm an overachiever, and I like being considered a good gamer.

Each Scene has two parts, first a Daytime level, and then a Nighttime level. At the end of the Nighttime level, you'll fight Dracula, whatever form he takes. The game is thankfully merciful enough to provide you with a source of ammunition so that you won't have to attack him with your pitiful butterknife sword. Guess what your ammunition is? Rocks. No, I'm not kidding, they expect you to defeat the Prince of Darkness by pelting him with rocks. What's hilarious is that he's easy to defeat, even with the weak ammunition you are provided with. It's mainly due to the fact that most of his forms are easy, and some are just repeats of previous forms.

The reason I gave the story a 1 is this:When I rate a game that is based off of a movie or book, I rate it on how well it follows its source material and how well it explains things. Well, this game neither stays true to the movie nor explains it very well. As in, there aren't any cutscenes nor story sequences to explain things, as well as the fact that the final battle with Dracula takes place in the castle. If I'm correct, the final battle took place OUTSIDE the castle.

The controls have their problems. For example, it takes your character about half a second to turn around, which can make the difference between taking damage and dodging an attack.

Note:For most of this review, I played on Hard difficulty. If Medium is much less difficult, which it didn't seem to be when I played it, tell me.

Rating: C+(Slightly above average:if you're a fan of the genre, this might be a good game for you)

Bram Stroker's Dracula is a side-scroller platform game loosely based on the 1992 film of the same name. Players take the role of Jonathan Harker whose mission to to destroy Count Dracula by first heading to Transylvania and then London.Jonathan Harker can move left and right, jump and attack with a weapon, the most basic of which is a knife. The status display on the screen shows Harker's health bar, countdown timer to complete the level and currently held weapon. Throughout the levels question mark boxes (similar to the Mario games) can be found, attacking these will reveal power ups which include health restoration, timer increase and new weapons. Among these new weapons are axes, daggers and a shotgun. Question mark boxes can also be used as platforms to reach other areas and enemies. Each stage is divided into two sections: the "Daytime" and the "Nighttime". These are entirely different levels comparable to stage 1-a and 1-b. Harker must jump to various platforms and obstacles and defeat minor enemies throughout the levels. The end of a Nighttime level is usually guarded by a boss creature who must be defeated to progress.

Users who own Bram Stoker's Dracula