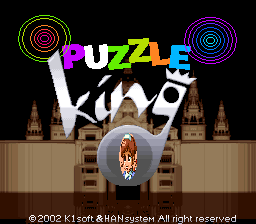 I'll start this review by saying I'm not big on typical fast-paced arcade action, so maybe you'll like this game more than me, or you'd rate the difficulty lower. Not that I'm ready to beat it up or anything. I...just felt like pointing that out.
Anyway, here's Puzzle King, a 1999 arcade game. There's absolutely no plot to anything that goes on in this game; trying to connect any dots between the playable characters leads to nothing. There are ten characters to choose from - two sets of five, at least, pertaining to different sub-games, which I'll get into later. These guys run the gamut from weird to flat-out lazy; in fact, in one of the games you can play as a farmer named Farmer.

Before discussing the BORING sound and music of Puzzle King, I'll go over the gameplay and stuff like that. You've got four games: "Pac Man 2", "Tetris", "Hyper Man 2", and "Snow". One of these sounds like a complete mystery...until one realizes that the title of the ROM notes "includes bootleg of Snow Bros.". That still leaves at least one mysterious enigma, unless you know who Hyper Man is supposed to be. I don't think I was ever aware there was a second Pac-Man, were you? 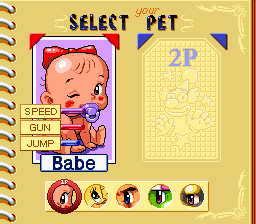 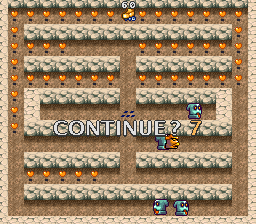 This is the game that plays first if you view the game's Attract Mode, i.e. that thing arcade games do when nobody's playing them to attract players. You control some sort of young animal, potentially a humanimal, as they maneuver a maze filled with baddies to collect tiny hearts and orbs. If you get a big orb, you can destroy whatever enemy you run into. Basically, and predictably, it's Pac-Man-style gameplay. One of the twists is that you have the power to jump and fire a gun. Honestly, I never figured out how to fire, and I always forgot that I even had the ability to jump, especially because it's not totally necessary (for the first few levels, at least). I guess I should note that the enemies start out a little slow, making the game easier to get into. Pac Man 2 is a cutesy, quirky ripoff of the arcade classic, and if that interests you, try it out. Definitely. 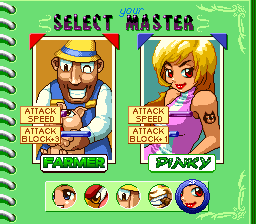 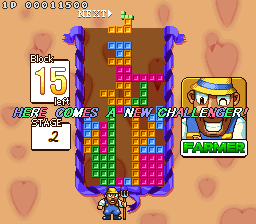 This Tetris is just Tetris. I mean, that's what it is, right? Just Tetris. Maybe a true Tetris aficionado would be able to tell you whether the way blocks rotate is desirable, or if the variety of different blocks (is there a specific term for them? 'tetroids'?) is up to par with the best of the series. I guess it was good. I wish they'd done more with the visuals, but they're alright. Nothing's wrong with this game. It's Tetris. There's a 2-player mode that I might like to try out, but I don't have that luxury at this moment - ergo, I couldn't try out anything 2-player in Puzzle King. So yeah, Tetris. Play? Don't play? It's good. Whatever. 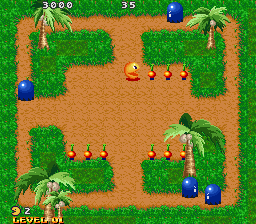 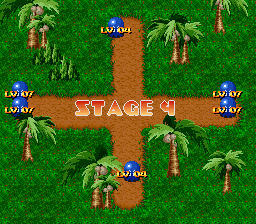 WOAH!! I internally screamed as this game appeared before me. WHAT THE HECK IS THIS?!?!

It's another Pac-Man ripoff...right? I bet you wish it was. This is a game with 3D-ish Pac-Manny sprites in a 3D-ish plane, and it's nothing like Pac-Man. For that matter, it's a huge visual departure from the rest of the game, too! If I had to describe it, it's like somebody pirated the original game, then took that pirate and gave it a professional paint job. The only things that have been retained, besides the existence of ghosts and whatever Pac-Man is, are 1) the ability to eat fruits and 2) the ability to get killed by a ghost if you touch one. Never mind the fact that they're dark blue; if they hit you, you're gonna lose a life, period. Please don't disorient yourself by trying to associate everything in this game with Pac-Man; it'll just make you lose faster.


As for more of the game mechanics... At first I figured that the goal was simply to eat all of the fruits onscreen, but if you try that, the level doesn't end. Turns out you have a Fire button, which will make 'Hyper Man' shoot a laser from his mouth. If you mash it enough times in an enemy's general direction, they'll be defeated, but the number of hits they take is determined by their level. Is that a game mechanic they really needed to display? I think the use of a health bar for every enemy is enough. Anyway, once you near completion of a level, higher level semi-transparent ghosts will be generated in the stage, and they'll fly around pretty fast. They'll disappear once you defeat the other opponents, so don't focus on defeating them. Also, sometimes when you fire your laser at random objects, they'll spit out a point-giving food, like a sunny-side-up egg or a hamburger, or some tasty radishes. Hyper Man 2's a fun, unique (sorta kinda) game that I might return to in the future. 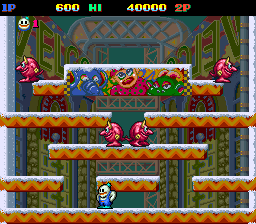 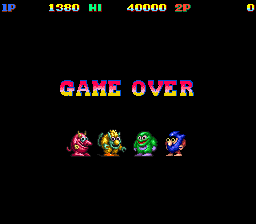 How deep and meaningful; a ripoff of Snow Bros. simply titled...'Snow'. You play as a fat, funny-lookin' snowy brother as he takes on weird monsters. He can throw a short-range snow thing of some kind, which will gradually bury enemies in snow. If they get buried enough, they turn into snowballs which you can roll or (by hitting the Fire button as you roll the snowball) roll really really really fast and defeat more enemies with. It's an enjoyable game, even if the controls are tough for me to get used to, and even if I've only cleared a mere two levels. Also, I love the animation for when you jump - it's one of the best things I've seen all day.


These games, like any good arcade romp, can be pretty addictive. The extent of their depth is also very arcade-y in that your best 'ending' is likely 'getting to stage 100'. None of them are without merit, and I don't have a most/least favorite.


That being said, I really, really don't like the sound in this game. For one thing it's a little lower quality than I was expecting, but the killing blow is the fact that there's only one or two background tracks in the entire game. The main theme is pretty incessant, and it seems to loop right before it ought to. The sound effects in the game are of about the same quality, but not bad. Overall, sound is not particularly enjoyable, to the point where I put the game on mute. Graphics are colorful enough throughout, but could have been improved through more visual variety. Maybe I shouldn't say that last part, though, because I really suck at these games and couldn't get past their early levels. The animations are cute, but the visuals lack personality when compared to other titles like, I 'unno, Metal Slug. Again, not bad (and scores higher than sound/music), and the visuals have their moments, but they're not particularly outstanding.


For anyone interested in a decent arcade game, I recommend checking this out. Not strongly, but hey. If this review particularly intrigued you, it has to be worth at least one good try.
Graphics 7   Sound 5   Addictive 7   Depth 8   Difficulty 8

Users who own Puzzle King (includes bootleg of Snow Bros.)